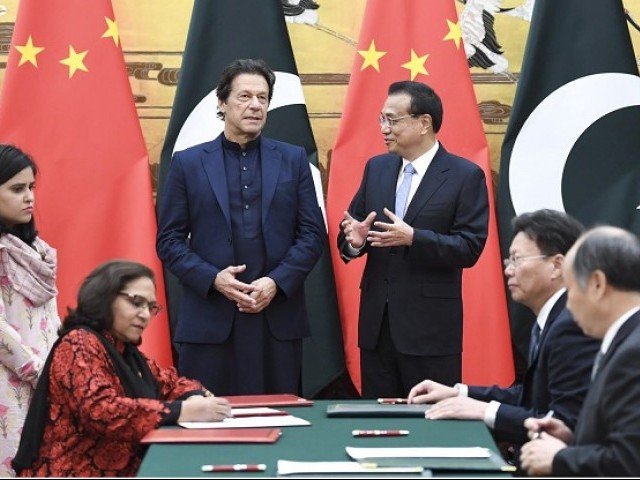 BEIJING: Pakistan and China on Tuesday agreed that the implementation of the second phase of China-Pakistan Free Trade Agreement (FTA) would lead to more trade, economic and investment opportunities between the two countries.

During a meeting between visiting Prime Minister Imran Khan and his Chinese counterpart, Li Keqiang at the Great Hall of the People, both sides noted that frequent bilateral exchanges were contributing to elevating the bilateral cooperative partnership to new heights.

Prime Minister Imran and Premier Li also discussed bilateral trade and economic partnership as well as the regional security, including the serious human rights and humanitarian situation in the Indian-Occupied Kashmir.

While discussing the ways to increase Pakistan’s exports to China, both the leaders emphasised that the implementation of the second phase of the FTA would lead to more trade, economic and investment opportunities between the two countries.

During the talks, Prime Minister Imran informed his Chinese counterpart that expeditious completion of the China Pakistan Economic Corridor (CPEC) projects was the foremost priority of his government.

The transformational project was pivotal to accelerating Pakistan’s economic development and regional prosperity, he said. He also apprised Premier Li of the actions taken recently by the government to fast track the CPEC projects and to push the development momentum in Gwadar.

Premier Li thanked Prime Minister Imran for the measures to advance the CPEC projects and maintained that the second phase of CPEC would be instrumental in reinforcing and consolidating Pakistan’s economic development and pave the way for enhanced Chinese investments in Pakistan.

Imran underscored that the cooperative partnership between Pakistan and China served the fundamental interests of the two countries and their peoples, and contributed to peace, development and stability of the region.

Prime Minister Imran apprised Premier Li of the latest developments and the importance of urgent action by the international community to alleviate the sufferings of the Kashmiri people in the lock down.

The prime minister extended felicitations to Premier Li on the 70th anniversary of the founding of the People’s Republic of China. He also reiterated his invitation to Premier Li to visit Pakistan at the earliest opportunity.

Other areas of potential collaboration, which were discussed in the meeting, included railways, steel, oil and gas, industry and science and technology sectors. The bilateral talks were followed by a banquet hosted by Premier Li.

The two leaders also witnessed signing of various agreements and memorandum of understanding (MOUs) aimed at deepening Pakistan-China ties in a range of socio-economic sectors.

Prime Minister Imran Khan is on a two-day official visit to China at the invitation of his Chinese counterpart – his third visit in 13 months. Upon his arrival at the Great Hall of the People, he was presented a guard of honour and a 19-gun salute.

Commenting on the prime minister’s visit and his meetings with the top Chinese leadership, Chinese Foreign Ministry Spokesperson Geng Shuang said that Beijing attached great importance to the visit of Imran.

“We have strategic mutual trust and advancing practical cooperation. Our cooperation in CPEC is bringing more outcomes to our peoples,” he said, adding that the bilateral relationship was in line with interests of both the countries and common aspiration of the world.

When asked whether the Kashmir issue would be figured during the talks, Spokesperson Geng Shuang reiterated that China’s position on Kashmir was clear and consistent. He called upon India and Pakistan to engage in dialogue to resolve the Kashmir issue and consolidate mutual trust.

“China’s position on Kashmir issue is clear and consistent. We call on India and Pakistan to engage in dialogue and consultation on all issues including Kashmir issue and consolidate mutual trust,” Geng Shuang told a regular briefing.