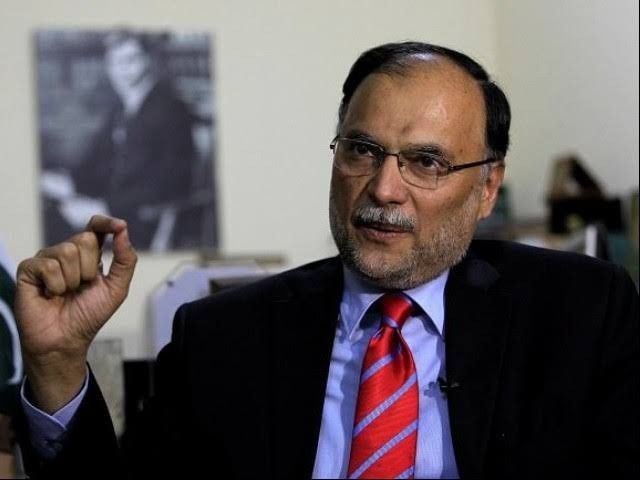 ISLAMABAD: Pakistan Muslim League-Nawaz (PML-N) Secretary General Ahsan Iqbal has come down hard on the Pakistan Tehreek-e-Insaf (PTI) over formation of China-Pakistan Economic Corridor (CPEC) Authority through a presidential ordinance, calling it ‘unlawful’ and against the recommendations of parliamentary committee.

“President Dr Arif Alvi has promulgated the ordinance by bypassing the CPEC committee and the parliament and we will strongly oppose the move in the Parliament,” Iqbal said in a statement issued here on Tuesday. “We completely reject this [act],” he added.

Iqbal, the former federal minister for planning and development who has been hailed as a CPEC hero by Chinese officials, also took to Twitter to denounce the controversial move.

Two separate ordinances to set up the CPEC Authority and grant tax concessions to the Gwadar port and its free zone were signed on the eve of Prime Minister Imran Khan’s visit to China where he is scheduled to discuss economic and political matters of mutual interests with the friendly country’s leadership.

The military had floated idea of the CPEC Authority in 2016. However, the then prime minister Nawaz Sharif had shot it down. Last month, a joint parliamentary committee on CPEC also opposed the setting up of the authority through a presidential ordinance.

The National Development Council — a joint forum of the civilian and military leadership — had approved the setting up of the CPEC Authority and extending tax concessions to Gwadar port in line with the Gwadar Port Concession Agreement.

Through the ordinance, the government has given vast financial and administrative powers to the CPEC Authority — including making its executives immune to legal prosecutions and giving it the powers to make its own budget.

Reacting strongly to the move, Iqbal in today’s statement said that the National Assembly’s CPEC committee had unanimously opposed formation of the body.

“Creation of the authority is a clear message to undermine trust in civilian institutions. This investment of $28.5 billion did not come into the country through any such ‘authority’. It was brought over by a civilian political government through democratic and constitutional institutions. It does not take such bodies to complete and operate the CPEC. It takes money and vision, and the current regime is devoid of both,” he maintained.

IK government is bulldozing legislative process to establish CPEC Authority thru an Ordinance, which was opposed by CPEC Parl Committee. Who do you think they want to appoint as Chairman?
– a Dev sector expert,
– a Proj mgmt specialist,
– a Retd bureaucrat,
– a Retd general.

The PML-N stalwart said that he had personally sent a message directly to the president that the creation of this body is illegal therefore he should not sign it under any circumstances, but he ignored that advice and the advice of the top national institution, the parliament.

The formation of CPEC Authority would raise new issues and complicate coordination among ministries and departments, said Iqbal, adding that the move would also create bureaucratic hurdles and limitations that will hamper and stall the CPEC projects.

Iqbal said that the parliamentary committee on CPEC recommended that the matter of formation of this authority be presented before the parliament, where it should be exhaustively debated. The committee had also advised not to go ahead with creation of any such body other than as an act of the parliament through legislation, he added.