The younge­st laurea­te so far is Malala Yousaf­zai, who won the 2014 Peace Prize at the age of 17
By AFP
Published: October 7, 2019
Tweet Email 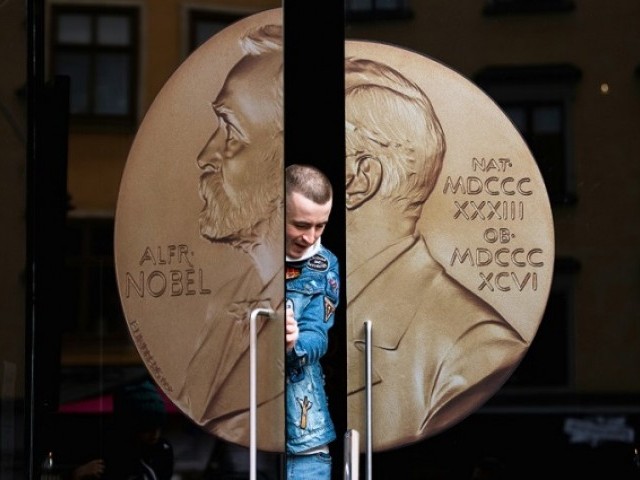 Predictions about possible winners are notoriously difficult as the prize-awarding institutions keep the names of the nominees secret for 50 years. PHOTO. AFP

STOCKHOLM: The announcement of the Nobel Medicine Prize on Monday opens an unusual 2019 Nobel season in which two literature laureates will be crowned after a scandal postponed last year’s award, amid speculation Greta Thunberg could nab the prestigious Peace Prize.

The winner of the Medicine Prize will be revealed on Monday at 11:30 (0930 GMT) in Stockholm. It will be followed by the prizes for physics on Tuesday, chemistry on Wednesday, literature on Thursday, and economics on Monday, October 14.

In between, the Peace Prize will be awarded in Oslo on Friday, October 11, with Swedish teen climate activist Greta seen as the favourite on betting sites such as Ladbrokes.

Predictions about possible winners are notoriously difficult as the prize-awarding institutions keep the names of the nominees secret for 50 years.

For the Peace Prize, the Norwegian Nobel Committee has only disclosed that it received 301 nominations this year.

Traditionally sensitive to issues gripping the public’s attention, the committee has undoubtedly noted the recent “Greta phenomenon” and the enthusiasm she has sparked among young generations in her campaign to raise awareness about climate change.

Experts remain however divided on whether there is an actual link between armed conflicts and climate change.

The head of the Peace Research Institute of Oslo, Henrik Urdal, therefore deemed it “extremely unlikely” the 16-year-old would win, adding her young age could also work against her.

The youngest laureate so far is Malala Yousafzai, who won the 2014 Peace Prize at the age of 17.

Other names circulating are Ethiopian Prime Minister Abiy Ahmed, who clinched a peace deal with arch foe Eritrea, and NGOs such as Reporters without Borders and the Committee to Protect Journalists.

For the Medicine Prize, the Karolinska Institute has received 633 nominations.

According to Swedish public radio SR, the honour could go to Lebanese-born American geneticist Huda Zoghbi for the discovery that a genetic mutation leads to the brain disorder Rett Syndrome.

American Mary-Claire King, who discovered the BRCA1 gene responsible for a hereditary form of breast cancer, was also mentioned.

Ronald Hanson of the Netherlands could win for his work on quantum entanglement, SR said.

For the Chemistry Prize, American John Goodenough, who invented lithium batteries, could become the oldest ever winner of a Nobel, at the age of 97. 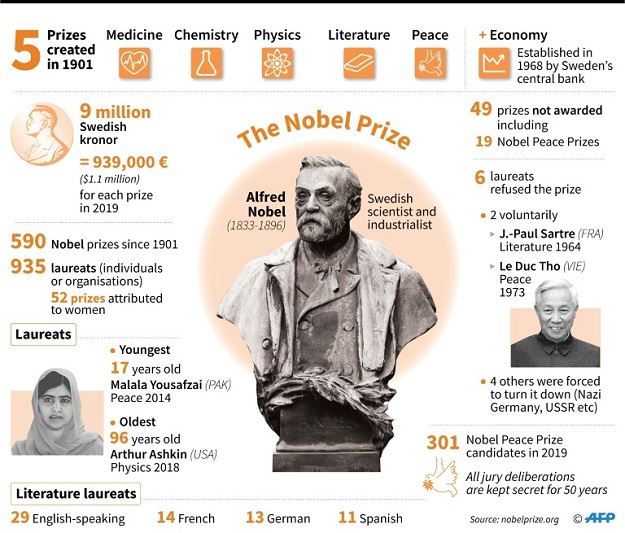 But it could also go to two women, Emmanuelle Charpentier of France and Jennifer Doudna of the US, for the gene-editing technique known as the CRISPR-Cas9 DNA snipping tool, a type of genetic “scissors” used to cut out a mutated gene in a human embryo and replace it with a corrected version.

Chinese-born American Feng Zhang also claims to have discovered the technique, which could also be eligible for the Medicine Prize.

Last year, the Swedish Academy which awards the Literature Prize was torn apart by a sexual harassment scandal that exposed deep conflicts among its 18 members. For the first time in 70 years, without a quorum to make key decisions, it postponed the 2018 Nobel by a year.

As a result, two literature laureates will be announced this year, one for 2018 and one for 2019.

Madelaine Levy, the literary critic at Swedish daily Svenska Dagbladet, suggested there was however a risk the selected laureates may turn down the prize, if they consider it to be tarnished by the scandal.

The academy has spent the past year trying to address its issues and restore its honour and is therefore seen to be steering clear of controversy in its picks.

Writers who have been making a buzz include Poland’s Olga Tokarczuk, Kenya’s Ngugi Wa Thiong’o, Ismail Kadare of Albania, Joyce Carol Oates of the US and Japan’s Haruki Murakami, say critics questioned by AFP.

Unlike the other Nobels awarded since 1901, the Economics Prize is the only one not created by the prizes’ founder, philanthropist and dynamite inventor Alfred Nobel, in his 1895 will. It was devised in 1968 to mark the 300th anniversary of Sweden’s Central Bank, and first awarded in 1969.

Among possible laureates this year are three women, according to economics commentator Micael Dahlen: Anne Krueger of the US for her work on international trade, Cuban-born American Carmen Reinhart for her work on public debt and growth, and French development aid economist Esther Duflo.

Each of this year’s Nobels comes with a prize sum of nine million Swedish kronor ($914,000, 833,000 euros), to be shared if there is more than one winner per discipline.

Five things to know about the Nobel prizes