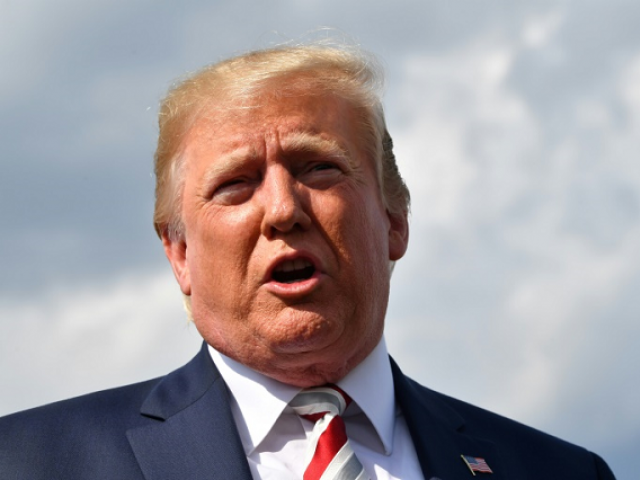 WASHINGTON: A second whistleblower has come forward with first-hand knowledge of President Donald Trump’s attempts to get the Ukrainian president to investigate a political rival, lawyers for the official said on Sunday.

Lawyer Mark Zaid said the person, also an intelligence official, has direct knowledge of some of the allegations involving the initial whistleblower complaint, which triggered impeachment proceedings against the Republican president.

The emergence of a second protected witness complicates efforts by Trump and his Republican supporters to dismiss the complaint as politically motivated hearsay and may strengthen the Democrats’ case against him.

The complaint, filed with the inspector general on August 12, cited information received from half a dozen US officials expressing concern that Trump was using the power of his office to solicit interference from a foreign country as he seeks re-election to a second term in 2020.

It also alleged that Trump leveraged $400 million in aid to secure a promise from Ukrainian President Volodymyr Zelenskiy to investigate a Democratic rival, former Vice President Joe Biden, and his son Hunter Biden, who sat on the board of a Ukrainian energy company.

“I can confirm that my firm and my team represent multiple whistleblowers in connection to the underlying August 12, 2019, disclosure to the Intelligence Community Inspector General,” Andrew Bakaj, a second lawyer, said on Twitter. Bakaj declined further comment.

Confirmation of another whistleblower followed stirrings of discontent within Trump’s own Republican Party after he called on Beijing on Friday to investigate Biden’s son, who had business dealings in China.

Republican US Senators Mitt Romney, Ben Sasse and Susan Collins have expressed concerns about Trump reaching out to foreign countries to help him in his 2020 re-election bid.

However, other Republicans stood firmly in support of Trump on news shows on Sunday, echoing the president’s insistence that there was nothing wrong with his Ukraine call and dismissing his entreaty to China as a joke, even though Trump continues to raise the issue.

“I doubt if the China comment was serious to tell you the truth,” US Senator Roy Blunt, a Republican member of the Senate Intelligence Committee, said on CBS’ “Face the Nation.”

“I don’t imagine that’s what he was doing. Certainly, we shouldn’t expect the Chinese, the Russians or any of our national security adversaries to be helpful in any way.”

Trump suspends entry of immigrants who cannot pay for healthcare

Trump has alleged that Hunter Biden profited in his business dealings in both Ukraine and China from his father’s position and that Joe Biden, as vice president, pushed Ukraine to fire a prosecutor to impede a probe of a company tied to his son.

However, there has been no evidence of any wrongdoing.

“The Biden family was PAID OFF, pure and simple!” Trump exclaimed on Twitter on Sunday.

The Biden family was PAID OFF, pure and simple! The fake news must stop making excuses for something that is totally inexcusable. Sleepy Joe said he never spoke to the Ukrainian company, and then the picture came out where he was playing golf with the company boss and Hunter…..

Biden spokesperson Andrew Bates said Trump had “sent his administration into a tailspin by trying to bully a foreign country into spreading a comprehensively debunked conspiracy theory about the vice president” and he predicted Trump would lose “the old-fashioned way: an intervention by his own country – courtesy of the American people – in 2020.”

The telephone call with Zelenskiy, a summary of which was released by the White House, and the whistleblower complaint prompted House of Representatives Speaker Nancy Pelosi to launch the impeachment inquiry on September 24. Trump’s attempts to solicit foreign interference jeopardised US election integrity and threatened national security, she said.

The investigation could lead to the approval of articles of impeachment – or formal charges – against Trump in the House. A trial on whether to remove him from office would then be held in the US Senate. Republicans who control the Senate have shown little appetite for ousting Trump.

Democrats said any finding that Trump withheld taxpayer money, already approved by Congress to help Ukraine fight Russian aggression, in exchange for a favour from Zelenskiy would strengthen the case against him.

Trump has maintained there was no “quid pro quo” in his request of the Ukrainian president, but text messages released last week have heightened Democrats’ concerns.

In the texts, Trump’s Ukraine envoy, Kurt Volker, told a Zelenskiy adviser a meeting with Trump could be set up if Zelenskiy convinced the US president he would pursue an investigation, while another State Department official expressed unease over the withholding of aid.

The committees leading the impeachment inquiry released the texts after Volker testified on Thursday.

The committees this week expect to hear from several other US diplomats, including Ambassador to the European Union Gordon Sondland, a committee official confirmed on Sunday. Sondland worked closely with Volker and Trump’s personal lawyer Rudolph Giuliani on the Ukraine effort.

Former US Ambassador Marie Yovanovitch, disparaged by Trump and abruptly recalled from Ukraine, was scheduled to give a deposition to congressional committees on Friday.