‘How can moon-sighti­ng with binocu­lars be consid­ered wrong when it’s not with specta­cles?’
By Our Correspondent
Published: October 7, 2019
Tweet Email 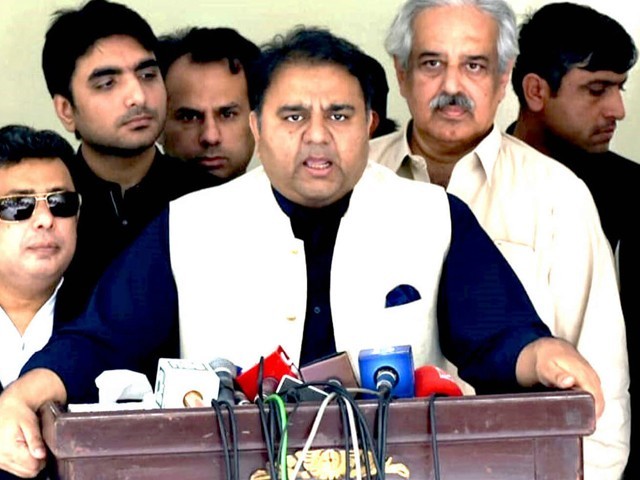 LAHORE: Federal Minister for Science and Technology Fawad Chaudhry has sought apology from the Central Ruet-e-Hilal Committee for what he claimed false announcement of moon-sighting for the Islamic month of Safar.

Speaking to the media here on Sunday, the minister said that he had shared photos of the crescent proving that the new moon was born on 29th Muharram (Saturday, September 29). “Therefore, the Ruet-e-Hilal Committee should extend an apology over their mistake,” he maintained.

“How can moon-sighting with binoculars be considered wrong when it’s not with spectacles?” he asked.

The conflict started when the science ministry released the date for the commencement of Safar 1441 AH on pakmoonsighting.pk, a website based on the lunar calendar.

The committee said it did not receive any evidence confirming the sighting of the moon from any part of the country on September 30.

Chaudhry, during today’s media interaction, said knowledge and wisdom was the only way forward for the country’s progress and prosperity, but only the enlightened segment of the society would understand this fact. “Of course there are also benighted people among us who simply can’t be expected to bring modern day realities under consideration,” he added.

The science and technology minister said that he has brought about several reforms in his ministry and as a result of those “we might get rid of electricity and telephone poles and wires from our streets in coming years”.

He said he had recommended LDA and CDA to adopt ‘water recharger’ technology to overcome the shortage of groundwater, which he says drops down by a metre in Islamabad and Lahore every year.

Ministry for Religious Affairs stands with Ulema over moon-sighting controversy

The minister also mentioned his innovative ideas of producing gas from garbage to power water geezers and using drones for spraying in agricultural fields. “I’ve requested Prime Minister Imran Khan to remove the ban on use of drones in the country,” he added.

Minister for Religious Affairs and Interfaith Harmony Noorul Haq Qadri, on the other hand, has already shown his ministry’s tilt towards Ulema (Ruet-e-Hilal Committee) in the wake of the controversy.

“The ministry stands with Ulema over the issue of moon-sighting,” said Qadri while presiding over a meeting on the use of advance technology for moon-sighting last week.

The religious minister, however, lauded the efforts of Chaudhry’s ministry for the formation of the lunar calendar but said the final decision on moon-sighting will be taken by the committee.