PTI govt claims Fazl is being used by other partie­s
By ​ Our Correspondent
Published: October 6, 2019
Tweet Email 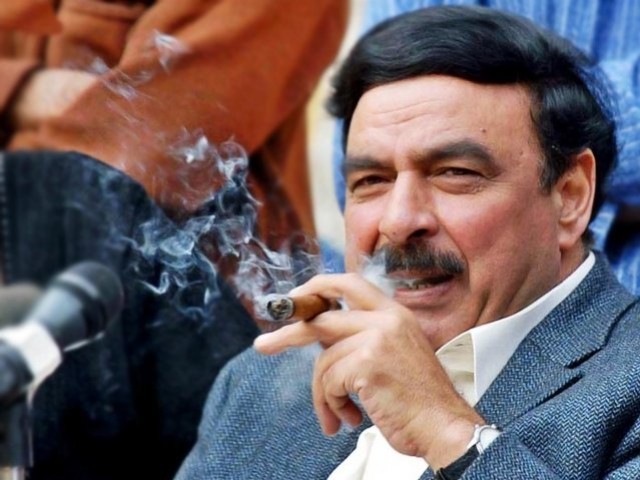 “Maulana shouldn’t involve the religious sections of the society in any agitation,” the minister said at a news conference, referring to the JUI-F’s anti-government ‘Azadi March’ to be held on Oct 27.

“His protest can damage the Kashmir freedom movement,” he added.

“The situation is tense in the entire region because of the Kashmir issue and Indian threats. He [Fazl] will be directly responsible for any unrest in the country or a confrontation on the border if he goes ahead with his protest.”

The minister said he wanted to give a message to religious forces that they should not join Fazl, who is using the religion card for his personal agenda.

He added that Mufti Mehmood, the JUI-F chief’s father, had run a movement in the name of Islam and now his son is spreading baseless rumours in the society.

“All of Maulana’s demands have already been presented before the UN by Prime Minister Imran Khan in his speech.”

Rashid said Fazl had first tried to use the Pakistan Peoples Party (PPP) and the Pakistan Muslim League-Nawaz (PML-N) to achieve his motives and is now being used himself.

“Maulana had earlier caused embarrassment to the opposition by pushing for a no-confidence move against the Senate chairman.”

The minister appreciated PPP Chairman Bilawal Bhutto Zardari for deciding to stay away from the ‘Azadi March’. “His [Bilawal] statement is a responsible one and shows maturity because he knows what the consequences of this long march would be,” he added.

Rashid advised PML-N President Shehbaz Sharif to choose a side and stop playing a double game.

He claimed that the JUI-F chief’s movement would be shattered if PM Imran announced the release of just six people. “The prime minister and the army are on the same page for national economic progress, national solidarity, and stability.

Separately, Special Assistant to the PM on Information and Broadcasting Dr Firdous Ashiq Awan said the JUI-F chief would not succeed in his plan to create instability and chaos in the country.

Addressing a news conference, she said the present government would complete its mandated period of five years with the support of the masses.

“People will not turn up for the long march and students of seminaries will also disappoint the JUI-F chief,” she added.

“The public is aware of the tactics and religion card being used by Fazlur Rehman to reach the treasury benches.”

Firdous maintained that the two opposition parties, whose leaders are facing corruption cases, are using the JUI-F chief to achieve their objectives.

“The government will not stop the JUI-F from staging a peaceful protest but the timing warrants greater unity instead of anarchy. The march should be for Kashmir and not dislodge the government.”