We have the first look of Marvel's Kamala Khan and no, it's not voiced by Priyan­ka Chopra!
By Entertainment Desk
Published: October 5, 2019
Tweet Email 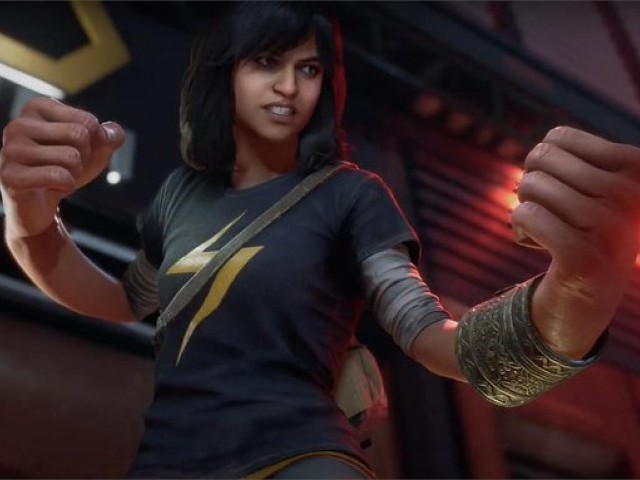 We have the first look of Marvel’s Kamala Khan and no, it’s not voiced by Priyanka Chopra.

Kamala Khan aka Ms Marvel is the youngest superhero in Marvel Cinematic Universe (MCU) and we finally have the first look, however, with a twist.

Marvel, earlier this year, announced they will be launching Ms Marvel on November 12. But what we didn’t know was she will also be a protagonist in an upcoming video game, revolving around the 2012 New York attack.

Khan is the sixth playable character for upcoming video game Marvel’s Avengers. She’s the one to get the team back together. Ms Marvel was voiced by Sandra Saad, a Pakistani-American.

Her character was revealed in a new trailer for the anticipated comic book title set to launch May 15, 2020 for PlayStation 4, Xbox One, Google’s Stadia and PC.

In the two minute trailer, we see a young Kamala Khan introducing herself to Thor, when the events of New York City attacks takes place. A trailer for the hero shows that she received her powers when exposed to mysterious Terrigen Gas following a Helicarrier explosion that supposedly killed Captain America.

Five years later, a teenager Khan comes across evidence showing a conspiracy behind the events of that day. Talking about her superpowers, Khan’s hidden Inhuman polymorph powers manifest allowing her to stretch her body.

“Telling our story of Kamala’s coming-of-age brings a fresh, hopeful perspective to the gameplay experience and her unique abilities as Ms. Marvel make her a character every person can relate to and will want to play,” said Shaun Escayg, creative director and writer at Crystal Dynamics. “Kamala Khan is one of the unique characters that makes our game stand apart from any Avengers story experienced before.”

“I think Kamala is a perfect fit for a game like this, since she sees the Marvel world the same way we do as fans and players,” added G. Willow Wilson, co-creator of Ms Marvel. “Kamala allows us to imagine what we ourselves would do if we suddenly discovered we had superpowers and got to stand alongside our heroes in their time of greatest need.”