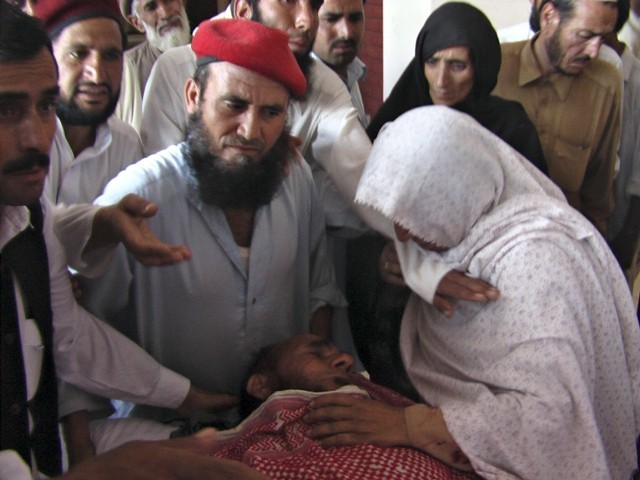 Pakistani volunteers wheel a wounded man to a hospital as relatives gather around him in the town of Batgram on July 11, 2011. A suicide bomber struck a public meeting in Pakistan's northwest where Amir Muqam had been due to speak, killing seven people including a child. PHOTO: AFP

HAZARA: A suicide blast killed six people, including three security personnel, two women and a child, and severely injured 17 others in the Batagram area of Hazara district in Khyber-Pakhtunkhwa on Monday.

The incident took place at the site where Pakistan Muslim League-Quaid (PML-Q) was due to hold a gathering, addressed by PML-Q leader Amir Muqam, later today.

“I can confirm now that it was a suicide attack. The bomber came on foot. He blew himself up when police stopped him for a body search at the entrance of the venue of the public meeting,” he said.

“The death toll has now risen to six after one of the injured people died of his wounds in the hospital,” police official Ghuman Hussain told AFP.

“We had informed the local administration some time ago and there should have been proper security arrangements in place,” Muqam told Geo television after the attack.

“I’ll certainly go there and see what happened. I’ll also go to the hospital to meet the injured people. I’m not satisfied with the arrangements made for the public meeting,” he said.

The injured have been shifted to the local hospital, and police and law enforcement agencies cordoned off the area. Forensics evidence is also being collected from the site.

The preparations of the gathering were underway when the blast took place; but PML-Q said it would continue with the procession.