Witnes­ses say they heard as many as three blasts from the area and though­t the army instal­lation had been attack­ed.
By Mudassir Raja / Obaid Abbasi
Published: July 12, 2011
Tweet Email 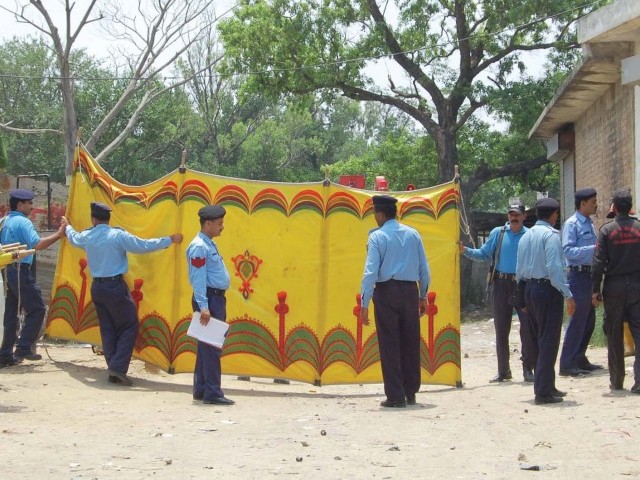 Police cordon off the site of the incident. PHOTO: MUHAMMAD JAVAID

One solider died and three others were injured in an explosion, caused by a short circuit, at a small military depot on Sahala Road in the outskirts of the federal capital on Monday morning.

“A unit of the army is deployed to safeguard an oil depot on Sahala Road where a fire, caused by a short circuit, broke out which was soon controlled by the army officers,” a police official said. A gas cylinder was also in the room and the barracks collapsed as a result of the explosion.

“The room is being used as accommodation for army personnel and explosive material was not stored there,’’ he added

Soon after the blast, army officials cordoned off the area and journalists were not allowed at the site.

Witnesses said they heard as many as three blasts from the area and thought the army installation had been attacked.

“I was going to the market when I heard there explosions.  I thought there was a terrorist attack and rushed towards a safe place,’’ said a witness, Muhammad Ramzan.

According to Rescue 1122 officials, army personnel had shifted the dead and injured to Combined Military Hospital Rawalpindi before civilian rescuers from the twin cities reached the spot.

The army installation is located some 10 kilometers away from the federal capital on a road that goes to Azad Kashmir. Later in the day, the Inter- Services Public Relations, in its official statement, said the blast and fire were accidental.