India took the UNSC’s lack of seriou­sness as an opport­unity to tighte­n its milita­ry contro­l over IOK
By Dr Moonis Ahmar
Published: October 4, 2019
Tweet Email 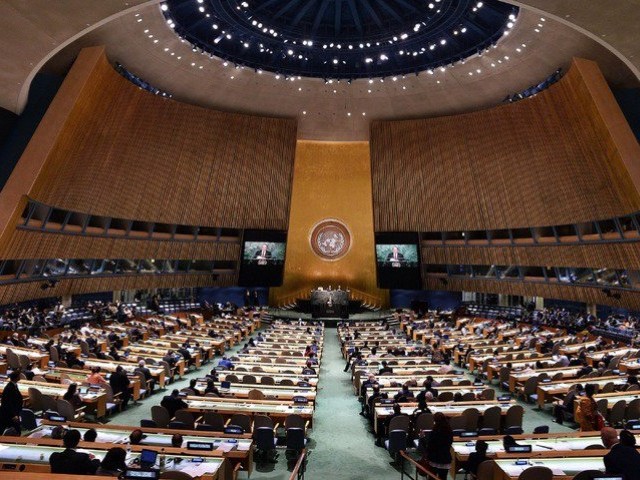 Prime Minister Imran Khan, in his address to the annual United Nations General Assembly (UNGA) session on September 27, compared the years 1939 and 2019 by linking policy of appeasement, particularly pursued by Britain, to appease Nazi Germany despite its occupation of Czechoslovakia and Austria. In 2019, the international community led by major powers is appeasing Israel and India despite their repeated aggression in Palestine and Kashmir.

The policy of appeasement is no guarantee for peace but is a recipe for war because covering up acts of aggression and genocide only cause more violence and bloodshed. The Munich Conference – held on September 28-29, 1938, and attended by German chancellor Adolf Hitler, Italian leader Benito Mussolini, British prime minister Neville Chamberlain and French prime minister Edouard Daladier – gave a clean chit to Nazi Germany for its occupation of Sudetenland, a part of Czechoslovakia, in return for Hitler’s assurance that his country would not further annex any territory. Instead, Hitler was encouraged and later, occupied Austria.

The policy of appeasement which Britain thought would avoid another world war didn’t work. On September 1, 1939, Germany attacked Poland. Historically in 1925, the Locarno Pact was signed whereby France guaranteed against any German invasions of Czechoslovakia and Poland. When Nazi Germany occupied a part of Czechoslovakia in 1938 it should have been stopped by France and Britain. But the Munich Conference provided enough space to Hitler who occupied Austria and then attacked Poland culminating into WWII’s outbreak. Britain’s policy of appeasement was because it considered communist USSR a major threat to capitalism, and Germany a lesser evil.

Likewise, Israel and India have violated UNSC resolutions on Arab-occupied areas and Jammu and Kashmir, plunging the Middle East and South Asia in a state of perpetual crisis. When Israel annexed the Golan Heights, established Jewish settlements in the West Bank and shifted its capital from Tel Aviv to East Jerusalem, the international community and the UN did not act against Israel. A policy of appeasement for Israel, which is pursued by the United States (US) and some Arab states, not only weakened the Palestinian cause but also encouraged Israeli Prime Minister Benjamin Netanyahu to assert that if he was re-elected, he will annex a large chunk of the West Bank. Conservative Arab monarchs and the US follow a policy of appeasement for Israel because they consider Iran as a bigger threat than the expansionist Jewish state.

How does this help expansionist and aggressive designs of powerful states and what is the price the world pays to overlook blatant violations of international laws and human rights? The world witnessed a dangerous trend when after the end of the Cold War, the US took the UN for granted and bypassed it by launching military interventions and unilaterally imposed sanctions against various countries. The US attack over Iraq in March 2003 was without a UN mandate and its sanctions against Iran bypassed the UNSC. The vacuum in the world order encouraged the US, Russia, Israel and India to act unilaterally and use force without UNSC mandates.

One can examine three realities to prove that like 1939, in 2019, the world is fast moving towards a major outbreak of hostilities as far as the Kashmir conflict is concerned. First, when India unilaterally revoked Indian Occupied Kashmir’s (IOK) special status, the world’s response was muted. On Pakistan and China’s insistence, the UNSC only held an informal meeting and failed to pass a resolution condemning India for violating the UN Charter and Security Council resolutions. India took the UNSC’s lack of seriousness as an opportunity to tighten its military control over IOK by imposing curfews and communication lockdowns; arresting thousands of Muslim Kashmiris including several hundred children; using brute force to quell peaceful protests. Had the UN not appeased India and given a lukewarm response to its oppression, New Delhi would have been forced to review its actions.

Second, appeasing India despite its brutal use of force against religious minorities like Indian Muslims, Christians and Sikhs would mean encouraging the Hindu extremist BJP/Shiv Sena regime to further its policy of religious persecution. As rightly pointed out by Pakistan’s Prime Minister during his speech at the UNGA session, appeasing India may lead to a dangerous situation which will threaten the outbreak of hostilities between the two nuclear neighbours. Like appeasing Nazi Germany despite its occupation of its neighbouring countries and overlooking Hitler’s anti-Semitic policy targeting Jews and other non-Aryan races, the world is appeasing Modi so he can continue his policy of ethnic cleansing of Kashmiri Muslims. If such a trend continues, it may lead to bloodshed and war in the region.

Third, silence against injustices, human rights violations, ethnic cleansing and genocide in IOK means appeasement. As per Prime Minister Imran Khan, the world should decide between the market India offers and siding with truth and justice. So far, major powers are unable to challenge India’s growing atrocities in J&K which is tantamount to appeasement. The blame of plunging the world into WWII — which killed 50 million people — was not with Hitler and his Nazi regime alone but also with major powers, particularly Britain, as they tolerated the renunciation of the Treaty of Versailles and back-to-back occupations of Germany’s neighbours. The blame for the outbreak of WWII was also with the German people for being a party to their regime’s policy of anti-Semitism, militarisation, aggression and occupation.

It seems 1939 is being repeated because of the indifference of major powers in dealing with issues that are a threat to global peace. Many wars and armed conflicts – like the French Revolution (1789), Russian Revolution (1917), WWII (1939), the bloody Partition of the Indian Sub-continent (1947), break-up of Pakistan (1971) and the collapse of the Soviet Union (1991) – took place in years which cannot be separated. Likewise, most armed conflicts and crises after the end of the Cold War are to be found in the Muslim World namely, Palestine, Kashmir, Afghanistan, Yemen, Iraq, Syria, Libya and Somalia. As a result, one can expect further radicalisation of the Muslim youth as unabated violence, displacement of millions of people and war deepens the feelings of extremism and militancy. IOK has been under lockdown for two months. The outcome of the world’s appeasement of India despite the agony of the people of IOK will, as pointed out by Pakistan’s Prime Minister, unleash a bloodbath when the curfew will be lifted.

It is high time the world, particularly the major powers, stopped the policy of indifference and appeasement as far as Indian atrocities against Kashmiri Muslims are concerned.