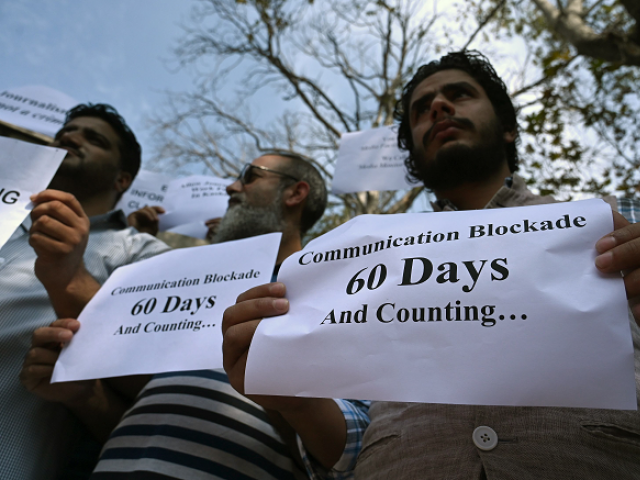 Journalists hold signs during a protest against the ongoing restrictions of the Internet and mobile phone networks at the Kashmir Press Club during a lockdown in Srinagar on October 3, 2019. PHOTO: AFP

SRINAGAR: Journalists in Indian Occupied Kashmir on Thursday protested a two-month-old “communications blackout” that they said is making their jobs virtually impossible.

Internet and mobile phones have been cut in most of the occupied Kashmir valley since August 5 when New Delhi rescinded the region’s autonomy.

To go online, the area’s 250 accredited journalists visit a government-run media centre in the main city of Srinagar where they wait often for hours to use one of the 10 computers for a maximum of 15 minutes.

“We are protesting against the press gag that the fraternity has faced,” said Shuja ul Haq, president of the Kashmir Press Club, one of around 160 journalists at the demonstration.

“Every journalist has suffered and we demand from the government that the communications blackout be lifted,” he said before a silent protest march.

There are no landlines in the media centre. To use the one mobile phone, journalists must put their name on a list. They say that computers are being monitored and that the internet is painfully slow.

There are also restrictions on movement for journalists, although these have been partially eased in recent weeks, particularly in rural areas.

Foreign journalists have been denied permission to visit the northern Himalayan region.

Because of what journalists say is government pressure, Kashmiri newspapers mostly publish only government handout statements, light-hearted human interest stories and practically nothing from outside Srinagar.

New Delhi stripped IOK of its autonomy on August 5, sending in tens of thousands of extra troops and detaining thousands of people including minors as young as nine.

Almost two months on, many of the region’s top politicians remain in custody with mobile phones and the internet remain snapped in most areas.

UN human rights chief Michelle Bachelet said last month she was “deeply concerned” while Washington has called for a “rapid” lifting of restrictions.

India claims its move last month is to boost Kashmir’s economy and end a spiral of violence – which it blames on Pakistan – that has killed tens of thousands since 1989. 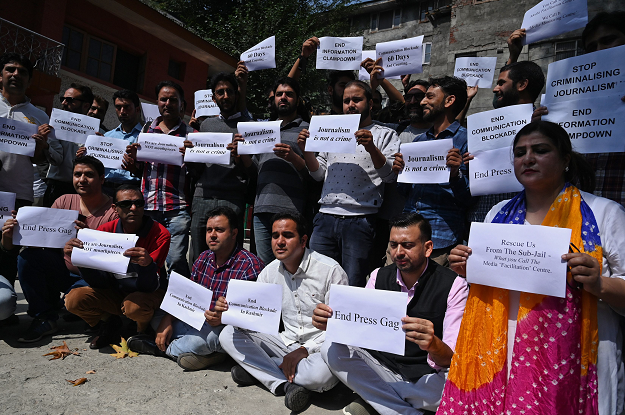 Journalists hold signs during a protest against the ongoing restrictions of the Internet and mobile phone networks at the Kashmir Press Club during a lockdown in Srinagar on October 3, 2019. PHOTO: AFP