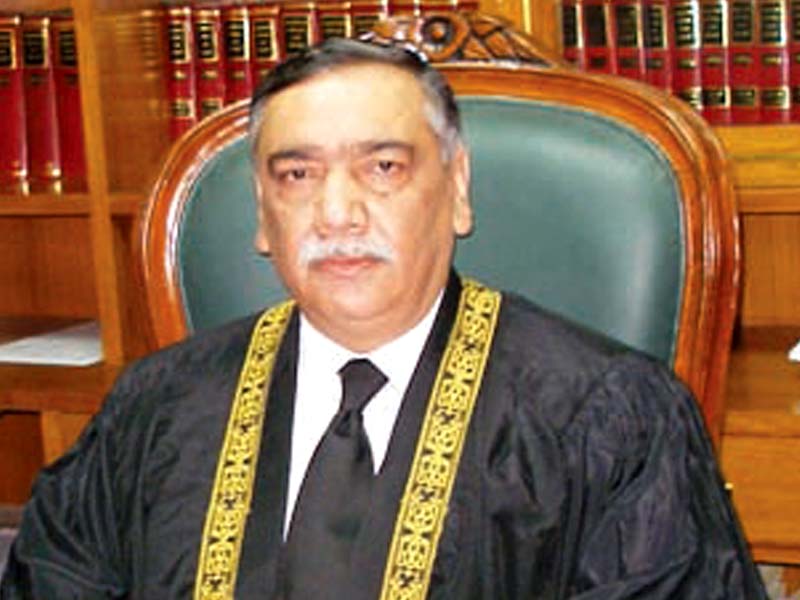 ISLAMABAD: Chief Justice of Pakistan (CJP) Asif Saeed Khosa on Wednesday observed that no term of imprisonment had been specified in the Pakistan Penal Code (PPC) in case of a life sentence.

The seven-judge larger bench of the apex court headed by the CJP is adjudicating the question as to whether a life sentence meant imprisonment of a convict for their remaining biological life or a period shorter than that — and if so, whether different sentences of imprisonment for life passed in the same case or different cases were to run concurrently or consecutively.

The bench noted that the Prison Rules, which have been framed in the Prisons Act, are meant for different purposes and could be invoked to determine the meaning of the expression “imprisonment for life” for the purpose of penal statutes.

It was primarily for parliament to have prescribed a period of incarceration for those sentenced to imprisonment for life had it considered appropriate, it added.

Submitting its written response, the Punjab government told the Supreme Court that a life sentence was imprisonment for the natural life of a convict.

“A misconception in public and certain corners of the academics still exists as to whether life imprisonment is of 15 years or 25 years. At times, this misconception has had been addressed by the judiciary also,” read the reply submitted by Punjab advocate general to the apex court.

“The misconception is the outcome of a misunderstanding of Section 57 of the PPC, which declares that calculating fractions of terms of punishment, imprisonment for life shall be reckoned as equivalent to imprisonment for 25 years.”

The Punjab government has contended that Section 57 of the PPC generally had no real bearing on the meaning of life imprisonment as it is only concerned with calculation of fractions. The language of the section provides that life imprisonment is reckoned as equivalent to 25 years and not deemed as 25 years. By no stretch of imagination can one draw an all-embracing function from this provision.

The Punjab government also stated that the second reason was the reconciliation of the meaning of life imprisonment under Section 57 of PPC and Section 2 of the Hadood Ordinance 1979. While the former calculates is as 25 years, the latter proscribes the remaining life of the convict.

The Punjab advocate general stated that under Section 401 of the Code of Criminal Procedure (CrPC), the government had the power to remit the sentence of life convict after he had served 15 years in the jail. This minimum 15-year imprisonment and release is not a rule but an exception. In other words, a convict cannot claim for release after 15 years as a matter of right.

The Punjab advocate general stated that the government was not under any obligation to release a convict after 15 years. Likewise, in the case of a dangerous and habitual criminal, the government will never exercise this power keeping such convicts in jail for remainder of their life.

The executive may indiscriminately remit the sentences but this exercise may render futile judicial sentencing where the judiciary sentences a person to life imprisonment, instead of death under a sincere impression that such person will serve their life in jail. However, this problem is yet to be addressed by the judiciary, the Punjab advocate general added.

The provincial government lamented the lack of jurisprudence in this area. “It is essential that certain reforms be introduced in its interpretation,” the Punjab advocate general added.

“It has been observed that there is general shift in the trends of sentencing for life imprisonment where judges have started putting judicial breaks over the exercise of remission powers by executive by prescribing the length of life imprisonment say 20/21/25/30/35 years before which no remission shall be granted. A similar approach has been recently reflected in Indian case law and the legislative amendments passed in 2013 and 2018.”

Pakistan Bar Council members Ahsan Bhoon and Azam Tarar appeared before the bench and stated that the bar wants to become a party to the case.

However, the matter was postponed as the petitioner requested to file a fresh review petition in the case.

Blast in Karachi spurs medico to set up hospital chain