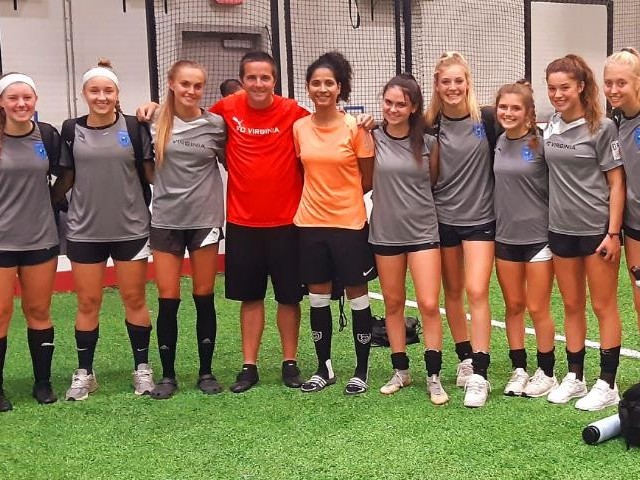 INITIATIVE: Hajra feels that there are no barriers when it comes to expanding her horizons as a football professional even if it means she starts her own academy. PHOTO COURTESY: HAJRA KHAN

KARACHI: How it feels to be determined? How it feels to know that one has to pick themselves up after your national football federation has almost deprived of a chance of a professional career? Pakistan women’s football team captain and striker Hajra Khan is translating all that into action.

The 25-year-old trained with The St James FC Virginia in the US for almost a month now, an opportunity as she feels will help her expand her experience.

“I’ve been training with FC Virginia Academy. I’m here on a 3-week stint and also exploring other options. The motive is to get better at the game and experience American style of play,” Hajra told The Express Tribune. “More than playing and getting signed I’m trying to reach out to girls across the world and share my story as well as represent Pakistan.”

Pakistan national team is among the lowest ranked teams in the world when it comes to football, not because of the lack of talent, but just that the Pakistan Football Federation (PFF) ran by Makhdoon Syed Faisal Saleh Hayat since 2003 has been ridden with politics so that he can keep the office.

Women’s football has always remained as a formality, a way to get the funds from the Asian Football Confederation and Fifa. Although Hayat has officially been ousted as the PFF President now, after controversial election drama that lasted four years from 2015 till resolution by Fifa this year, as they announced a Normalisation Committee to sort the matters out between Hayat and his rival faction that came to office through the Supreme Court-ordered elections in December 2018.

It is the women’s football that suffered the most, with the team that is no longer there, and the players that represented the country in 2014 last time at the South Asian Football Federation Women’s Championship.

Hajra, being the captain, and most vocal in the squad that last formed the national team, had to fight to survive as a footballer.

Going back to play with a club after years was not easy, but an important step that Hajra knew she had to take with the support of the players and the coaches at The St James FC Virginia.

She had gotten the motivation to carry on after being part of the World Record matches that she played in Lyon during the Fifa Women’s World Cup in June.

“I started, I haven’t played with a club like that in a long time, but after Lyon, the world record match, my motivation got back,” said Hajra as she has also been a fervent advocate on mental health especially among the athletes, in challenging environments like Pakistan. “It was after such a long time that I have played in a club, with players that before the training session at times I would put my cleets back in the bag, I was so nervous, the self-esteem and self-confidence, I would put my cleats back, but I have to get back.”

However, it is her journey as a woman striving to have a career as a footballer in Pakistan that inspires others, as she has shared her story with the academy girls at her host club, but also the pain of knowing of what Pakistan women’s football could have been.

“It was an absolute honour and privilege to have Hajra train and play with our St James FC Virginia Girls Development Academy,” said The St James FC Virginia’s Academy Director Bobby Puppione. “Hajra’s experiences and stories impacted our players and showed the true beauty of the game of soccer. We thank her for this opportunity to positively influence our environment.”

Regardless, Hajra feels that there are no barriers when it comes to expanding her horizons as a football professional even if it means she starts her own academy.

“I’m 25 years old. I don’t have much life left as a player,” said Hajra, a sentence that can break one’s heart, from the top women’s player of Pakistan, but it is grounded in practicality, and also in search of opportunities. “I’m not bad, but I’m as good as they (players from other countries) are. There is zero football (in Pakistan), but I want to see what is out there, emotionally, physically, what is out there for me that I can learn and bring back home, and start my own academy too. Maybe I can play more, I know I can. But to transfer this knowledge and put it to service through academy as well, my academy, that can bring a change, slowly, but steadily as I do see many people walk up to me and tell me that they would want their daughters to play football like me.

“I see a lot of Pakistani players, but we have a long way to go. I’m here, picking up what I learn and I want to bring the same kind of structure back in Pakistan.”

“There are other academies, but they are more about business, but my goal is to bring it back home, change it. To bring it back home, to come and play without fear. In Pakistan the athletes do not have any direction, in my academy I want to groom players and then look for their prospects abroad too, a lot can be done, but slowly.”

Hajra adds that the difference between the sports culture in the US and home is huge, as there is athlete care, there is respect for players and more so a lot of sport within the communities.

“They respect their athletes, they are patriotic, they want to stay at number one. The US women’s team is at number one in the world. I feel the passion. But here, there is immense parental support, it’s just not the players, the parents would drive them.”

The PFF has constantly failed to provide women with their right to have professional careers as there is no league for women in Pakistan, and only a national championship that would happens annually and only for a week.

But Hajra did become the first women’s player to sign a contract abroad in Maldives, and made her presence felt at international forums too, while on one of those, like Future without violence and WomenWIn helped her get in touch with Leila Milani, who helped her to get to FC Virginia x The St. James.

“I met Hajra on a brief visit to Pakistan via a collaborative program between Futures Without Violence and WomenWin in an effort to address gender-based violence through sport.  Meeting Hajra helped open an important conversation about the power of sports to help girls gain self-confidence, recognise their worth, and envision a world where they play an important role in its advancement. Hajra is the perfect example for all the young girls in Pakistan who want to visual themselves as an athlete, a physician, an artist, a lawyer. She has overcome many obstacles and is willing to turn around and tell the next generation to join her on this incredible journey,” according to Senior International Policy Advocate Futures Without Violence Milani, as Hajra says.

Disappointing to be an athlete in Pakistan

To be a footballer, an athlete in Pakistan requires sacrifice, a sacrifice that should not have been necessary had the PFF been run professionally. Even at the international camps and events for women they would only get $3, a meagre sum, a formality, that was not only humiliating but unfair on every level.

“It’s disappointing to be an athlete, a footballer in Pakistan. It feels like the sense of not belonging and that is how the federations make you feel. It’s a pity that we have to start from square one, every single time,” concludes Hajra.

“Me sacrificing a lot of talent, my time and making no pro career even after 10 years…. its disappointing.”

Knowing that when she will come back home, back to Pakistan, there is no league or events she can compete in, but she is hopeful that every opportunity like the one in the US now can open doors for more possibilities, if anything her story can help other players to empathise with one another and form the bond that can inspire footballers in a bigger picture.