Fact check: Toddler in K-P died after choking on peanut, not due to polio vaccine

Screenshot of the misleading Facebook post.
A photo of a toddler has been shared in a Facebook post which claims the one-year-old girl died in Swabi, Khyber Pakhtunkhwa after she was given polio drops.

The claim is false; the hospital autopsy, a top government public health official and local police said the infant died after choking on a peanut; and AFP spoke to the girl's father who said it shows his late daughter.

The photo was published in a Facebook post on August 26, 2019. It was shared more than 180 times before it was removed.

The post showed a photo of an infant girl alongside a caption claiming that she died after being given the polio vaccine in Swabi. 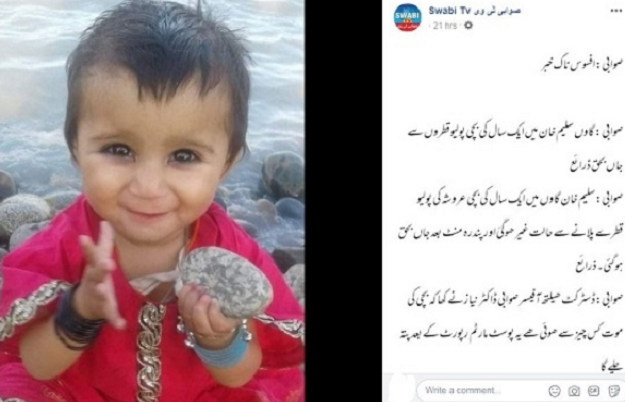 "Swabi in Salim Khan village, a one-year-old baby girl Uroosha’s condition deteriorated after she was administered polio (vaccine) drops and she died after 15 minutes. Sources."

"Swabi. District Health Officer Dr Niaz said that the cause of death will be known after a postmortem report."

The claim is false. The official autopsy report stated the girl pictured in the post died after choking on a peanut.


Uroosha's father Hidayatullah, a 26-year-old labourer, told AFP by phone that it was her photo in the Facebook post.

"Yes this is my daughter's photo and I gave it to media people who contacted me after the death of my daughter," he said.

Police official Liaquat Ali also told AFP that the father claimed that his daughter died because of polio vaccination, but the autopsy report found that she choked on a peanut.

In a tweet, Prime Minister’s Focal Person for Polio, Babar Atta, described the misleading post that Uroosha died after she was given polio drops as “fake news” in his tweet.

Absolute Fake, we have just received the autopsy report of the innocent child, unfortunate death occured due to choking from dry peanut.

Atta forwarded a scanned copy of the postmortem report for the child to AFP.

Under the section "remarks by a medical office", the post mortem document states: "In my opinion, the deceased died due to asphyxia due to choking at the level of trachea due to peanut." 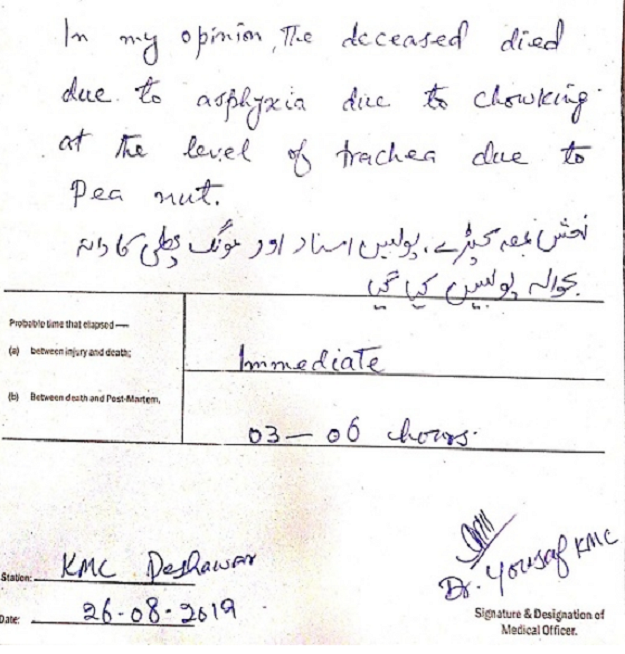 The hospital autopsy report also shows the same name and age - Uroosha, one-year-old - of the deceased child as in the Facebook post. 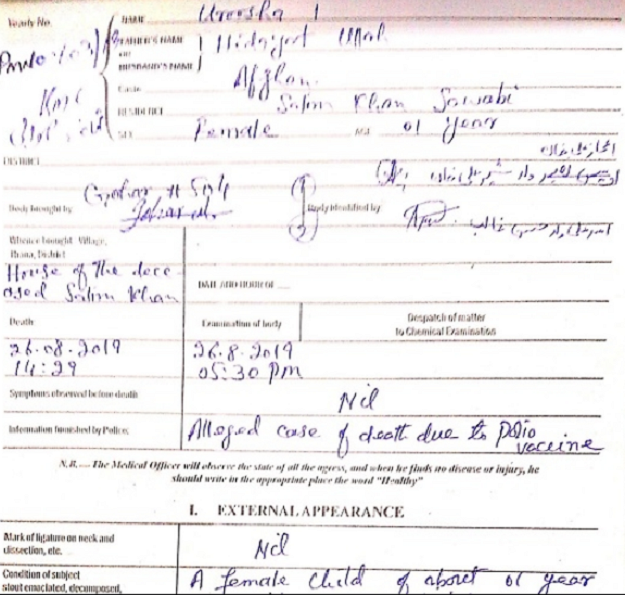 Another polio case surfaces in Sindh