Love hurts: Hindu couple marries outside press club as a sign of protest

Love hurts: Hindu couple marries outside press club as a sign of protest

There have been no Hindu marria­ge regist­ration laws since 1947.
By Z Ali
Published: July 11, 2011
Tweet Email 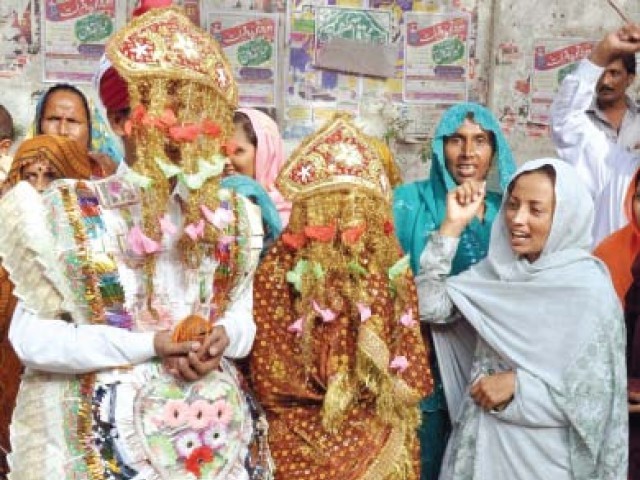 Mukesh and Padma, stand together fighting for their rights to be recognised as a married couple. PHOTO: SHAHID ALI/EXPRESS

Mukhesh and Padma walked around fire, seven times, to tie the knot, but without the pomp and splendour which is the essence of traditional Hindu weddings. The ceremony served a dual purpose, it was a wedding and a protest. It highlighted the Hindu community’s demand for laws that register their marriages in Pakistan.

“Since 1947, Hindu couples have not been legally accepted as husband and wife,” says Guru Sukh Dev who solemnised the wedding by reciting Vedic verses. “Consequently, many domestic, social and psychological problems arise for Hindu families, especially for the women.”

The demonstration was organised by a local leader of scheduled caste communities, Ramesh Mal. He said that since the creation of Pakistan there have been no laws for Hindu marriages. “The Pakistani government should take a cue from India and introduce laws to protect Hindu marriages,” said Mal.

According to him, they have problems acquiring national identity cards and passports, registering married women, and conducting property transfers. Even travelling becomes difficult for them inside the country.

Mal said that many young girls from his community are abducted, forced to convert to other religions and forcefully married. This happens because laws to protect these Hindu girls do not exist in Pakistan.

The protesters chanted slogans, urging President Zardari to issue an ordinance for their marriage registration laws, until a law is enacted.

One of the protestors, Sapna Devi, said that she had been married for 17 years but she had no legal evidence of the union. “God forbid, if he passes away, I will be unable to claim his property,” she explained.

The newly wed couple, hailing from the district of Khairpur, said that, “though their wedding may have seemed strange because it was performed in an unusual manner, in front of the media, outside the press club, it marked the beginning of their new life”. The purpose of doing it this way was to show the world that they were deprived of this basic right.

Quoting the 1998 census, Mal told The Express Tribune that scheduled caste Hindus, who led the protest, comprise more than one-third of the 3.4 million Hindus in Pakistan. He said that the parliament has eight minority MNAs to represent the Hindu community, but their fight for marriage registration laws have yet to produce results.