Accord­ing to the label, over 75 per cent of the ready-to-wear collec­tion is eco-friend­ly
By Reuters
Published: September 30, 2019
Tweet Email 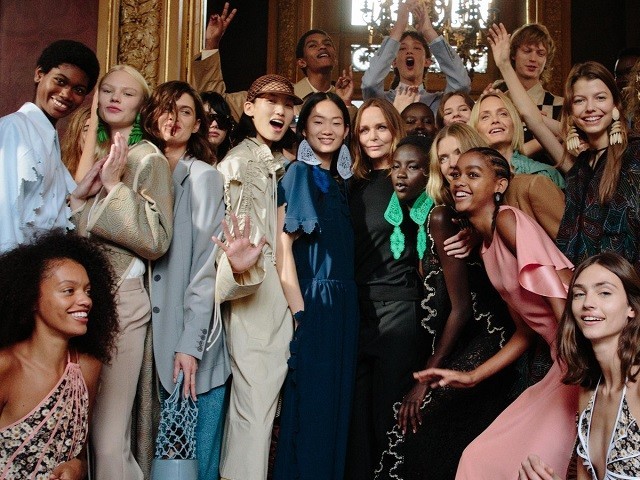 According to the label, over 75 per cent of the ready-to-wear collection is eco-friendly. PHOTO: TWITTER/STELLA MC CARTNEY

PARIS: Stella McCartney on Monday unveiled her first collection since linking up with the French luxury group LVMH, showing fluid dresses, wide-legged pants and floral prints that she said were the most sustainable clothes she had made.

With her father, ex-Beatle Paul McCartney, in the audience, the British designer held her Paris Fashion Week show in the Palais Garnier, the ornate home of the Paris National Opera. The show started with outfits in a natural palette, followed later by designs with touches of bright colour and bold graphic stripes.

Can Stella McCartney Change LVMH From Within? : This week, everyone will be talking about Stella McCartney's first show as part of the LVMH empire, Dover Street Market's new beauty shop in Paris and the unveiling of the BoF 500. Get your BoF Professional… https://t.co/GOi13XlrzO pic.twitter.com/3bTTtuX6s1

Over 75 per cent of the ready-to-wear collection is eco-friendly, according to the label, using recycled polyester, organic cotton and sustainable raffia. Amber Valletta and Adut Akech strutted down the catwalk in blue-green utility garments while Kaia Gerber, top model Cindy Crawford’s 18-year-old daughter, wore a light floral dress.

Cover up this winter with an oversized teddy coat made from recycled polyester. Discover it in-store and online now.#StellaKids⁣ pic.twitter.com/j8IeaHBIJC

The spring and summer 2020 collection is McCartney’s first one since LVMH took a minority stake in her eponymous brand. The deal came a few months after the designer bought back a 50 per cent stake from Kering, ending a 17-year partnership with the French conglomerate.

“There is a lot to be done at LVMH in a positive way and I am very excited and open to find some solutions (to sustainability issues)”, McCartney told Reuters after the show.

Aishwarya and Eva reunite at the Paris Fashion Week, 2019

A pioneer in using recycled fabrics and one of the first major designers to ban leather, fur and animal-derived glues, Stella McCartney has been appointed special adviser to Bernard Arnault, LVMH’s chairman and chief executive.

We did it again! #StellaSummer20… Now our most sustainable collection ever. Thank you to everyone for another amazing show ✨⁣ #StellaMcCartney pic.twitter.com/S7x7oARQt0

“If I say to LVMH to stop using leather, they may find that pretty difficult,” McCartney said. “But if I suggest banning plastic water … (bottles) in headquarters and stores and replace them with aluminium cans, that is doable.

“I can not only give advice but also plug in a solution pretty quickly. The list is very long and we have to start somewhere”.

LVMH, absent from an industry “fashion pact” launched under Kering’s auspices, said it was on course to beat a goal of meeting 30 per cent of its energy needs from renewable sources by 2020 and also on track to cut its CO2 emissions by 25 per cent by the same time.

Beyoncé’s empowerment anthem ‘MY POWER’ from the Lion King: The Gift album, was used to close the Paris Fashion Week during Stella McCartney’s runway show. pic.twitter.com/btBYurKz97