After it breach­ed Turkis­h air space six times before it was finall­y shot down by F-16 jets
By AFP
Published: September 30, 2019
Tweet Email 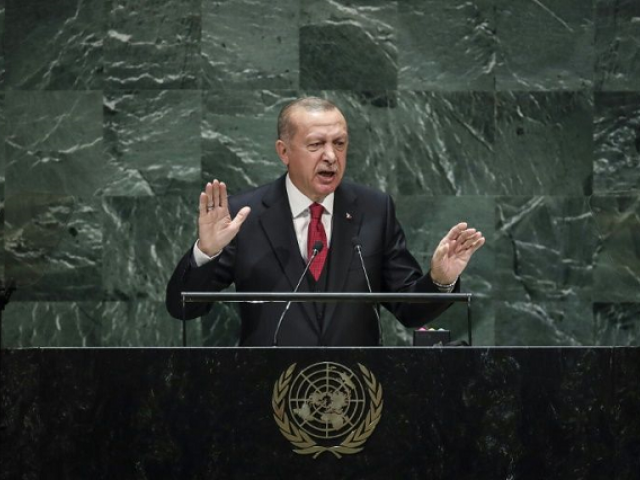 A planned meeting between Turkish President Recip Erdogan and US President Donald Trump on the sidelines of the UN General Assembly meeting in New York did not take place. PHOTO: AFP

The drone detected near the border by the military intruded into Turkish airspace six times before it was finally shot down by F-16 jets.

“An unmanned aerial vehicle which violated our air space six times (on Saturday)… was downed by two of our F-16s which took off from Incirlik” air base in southern Turkey, the defence ministry said, sharing pictures of the downed drone on its official Twitter account.

The ministry said the unknown aircraft was grounded at 1:24 pm (1024 GMT) local time, adding: “The wreckage of the drone was found at the Cildiroba base” by the Turkish gendarmerie in the Kilis province near the Syrian border.

Turkey’s top national security council which brings together the country’s civilian and military leaders is due to meet on Monday led by President Recep Tayyip Erdogan. The Syria issue is expected to figure high on the agenda.

The Turkish air force shot down a Russian Su-24 aircraft in the Turkey-Syria border area in 2015, sparking an unprecedented crisis in the two countries’ relations.

That was condemned by Russian President Vladimir Putin as a “stab in the back” but the two countries later reconciled and worked together on the Syrian crisis although they remain on opposite sides of the conflict.

Turkey backs militants seeking the ouster of President Bashar al-Assad, while Moscow is one of the few remaining allies of the regime in Damascus.

Ankara has long been pressing for a safe zone between the Turkish border and Syrian areas east of the Euphrates river controlled by the Syrian Kurdish People’s Protection Units (YPG).

The two NATO allies, Turkey and the United States, reached a deal last month to establish the planned scheme but Ankara is not satisfied with the current state of talks with Washington.

Erdogan has repeatedly threatened to launch a cross-border offensive against the YPG if the plans to realise a safe zone with Washington fail by the end of this month despite the joint ground and aerial patrols.

He has warned his country’s preparations on the border ahead of a possible operation have been completed.

The YPG is one of the major sticking points in Turkish-US ties.

The US views the YPG as a close ally in the fight against the Islamic State (IS) group but Ankara says the YPG is a terrorist militia linked to the outlawed Kurdistan Workers’ Party (PKK), which has waged an insurgency inside Turkey since 1984.

The Turkish military conducted two offensives in northern Syria against the IS and Kurdish militia forces in 2016 and 2018.

Erdogan planned to meet with US President Donald Trump on the margins of the annual UN General Assembly meeting in New York this week but a bilateral meeting did not take place. The Turkish leader only attended a reception given by Trump for heads of state.

Erdogan has said up to three million Syrian refugees could be returned to the safe zone – planned both to push Kurdish militia away from the border and also to house Syrian refugees.

The country is already playing home to more than 3.6 million Syrian refugees – the highest number in the world – and there have been signs of a public backlash over their presence after eight long years of war in Syria.

Analysts however say the scheme for a safe zone planned to be 30 kilometres deep and run 480 kilometres (300 miles) along the north of Syria is unrealistic as Washington is struggling to balance its ties with Ankara and the Kurdish militia.