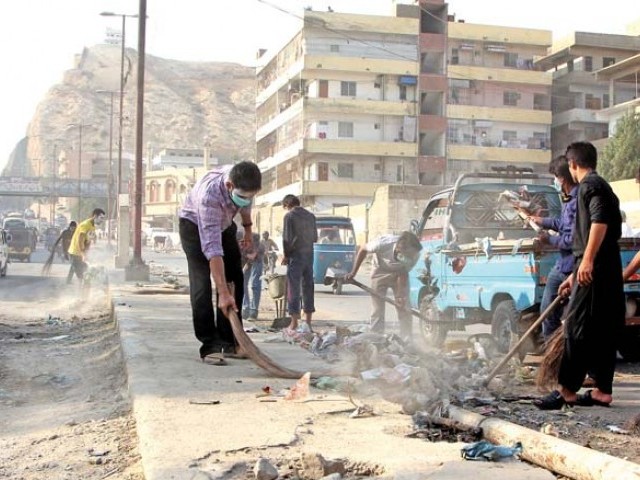 KARACHI: Sindh Human Settlements Minister Ghulam Murtaza Baloch termed the ‘Clean My Karachi’ campaign as one of the most resounding achievements of the Sindh government while visiting various areas of the Malir District on Sunday.

While inspecting the situation in different areas, Baloch expressed annoyance as he came across a pile of garbage in front of a school in Allah Bakhsh Himayati Goth and issued directives to take action against those found responsible for open littering.

SHC issues notice to Akhtar over garbage piles in Karachi

He asked the assistant commissioner to penalise citizens who are found littering the streets despite the presence of a kachra kundi in the locality. Additionally, he also ordered setting up police pickets in the area.

During the minister’s visit, residents of Bin Qasim Railway Quarters apprised him of their problems. They complained that cattle pen owners habitually dispose of garbage and throw dung in the area, following which Baloch ordered the district administration to take action against those violating the ban on open littering. Moreover, he also directed the officials to take steps for cleaning the area and shifting the garbage to landfill sites.

20,306 tonnes of garbage lifted in two days of ‘Clean My Karachi’ drive

Addressing the issue, Baloch said that buffalo enclosures in residential areas disrupt the sewerage system and spread garbage and dirt. Action is being taken action against them, he assured the citizens.

He claimed that so far, millions of tonnes of garbage have been transferred from Karachi to landfill sites and the provincial government will continue the cleanliness activities on a permanent basis. According to Baloch, thousands of tonnes of garbage have been removed from Malir District alone, since the beginning of the ‘Clean My Karachi’ campaign.