350 Moveme­nt calls out big fossil fuel compan­ies for profit­ing at the expens­e of the planet­
By Anadolu Agency
Published: September 29, 2019
Tweet Email 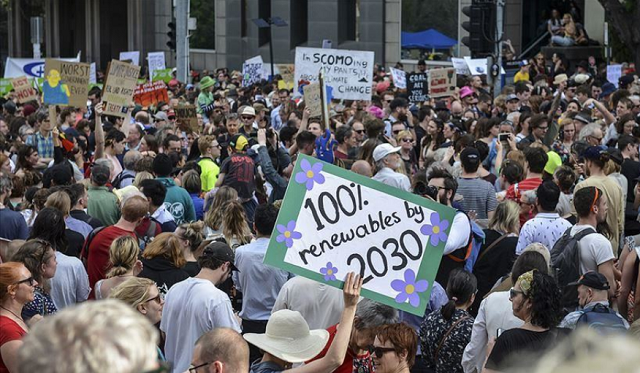 ANKARA: Millions of students, workers, and scientists came together at the global climate strikes last week.

Over 7.6 million people held demonstrations on streets and squares – almost equal to the 2003 anti-Iraq war protest, making it one of the biggest global demonstration in the history of protests, the 350 Movement said.

Italy, Germany, Canada, the US, and Spain were the five countries where most people attended the global climate strike, the statement added.

“While young climate activists were giving powerful speeches to the authorities, only a few meters away major multinational oil company CEOs were meeting with government representatives and diplomats in another lobbying effort to shape and influence climate policy,” the movement said, referring to meetings on the sidelines of the UN General Assembly session in New York.

It stressed the importance of meeting the Paris Agreement goals and cutting global emissions of greenhouse gases while criticizing big fossil fuel companies.

“While the planet heats up and entire communities lose their lives and livelihoods, the big fossil fuel companies keep profiting from coal, oil and gas,” the statement concluded.