Pakist­an should make peace with the fact that on issues such as Kashmi­r, it will not receiv­e much suppor­t from the US
By Rustam Shah Mohmand
Published: September 27, 2019
Tweet Email 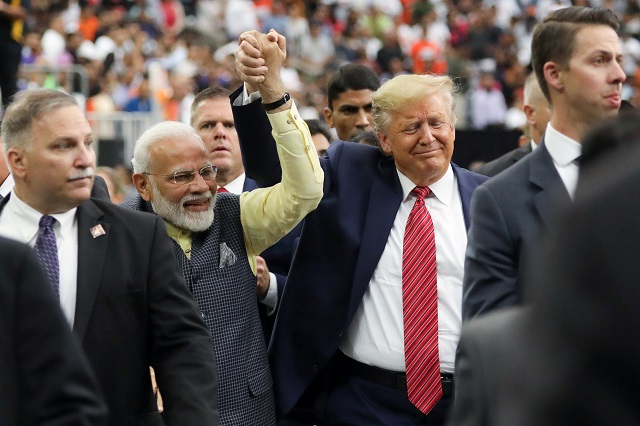 In an unprecedented move, the US President joined the Prime Minister of India in a stadium in Houston, Texas, and addressed more than 50,000 Indian-Americans. The event underscores the deep cultural, political, economic and military ties between the two large democracies and their enduring partnership in a troubled region.

The event is also a significant triumph for Indian diplomacy that has been able to create an appropriate environment for an American president to participate in a rally in the US that was organised by a foreign diaspora to welcome their leader. Undoubtedly, President Trump has taken into consideration the presence of tens of thousands of US citizens of Indian origin who are going to vote in the US election next year. Houston alone hosts 130,000 citizens of Indian origin.

The event which took weeks in planning is the outcome of hard work and skilful diplomacy. It also shows that rhetoric and symbolism can only play a very limited role in building a strong and robust relationship. Beyond that, it has to be based on an assessment of the objective realities and recognition of the mutual benefits that such a relationship would deliver in the short and long term.

The event almost overshadowed the visit of Prime Minister Imran Khan, who is also in New York and will deliver a speech at the General Assembly session mainly devoted to exposing India’s policy of apartheid in the disputed state of Kashmir.

The “Howdy, Modi!” event is a milestone in relations between the US and India. In recent years, the ties gained strength on the back of a US-China struggle for hegemony and control in the region of the South China Sea. The strategic partnership agreement between the US and India provides the basis for a mutually productive and robust partnership between the two countries in sectors like defence, communication, trade, investment, weapons purchase and an ever stronger political engagement.

In contrast, Pakistan has been long on symbolism and short on substance when it comes to conveying a consistent and unambiguous stance on key foreign policy issues, including Kashmir. The presence of a large number of militant outfits in Pakistan raises concerns and suspicions about Islamabad’s claims of not allowing its territory to be used against any other country. A time has come for Pakistan to dispassionately evaluate the pros and cons of having allowed such militant groups to roam about freely in the country. Islamabad has finally woken up to the reality that these groups have only harmed the country’s credibility. Some action has been taken but doubts persist whether it was for the world to see or whether there is a genuine re-appraisal of policy. If history is any guide, such non-state actors have always caused more harm and have damaged the institutional framework of the countries they operated in.

Pakistan would emerge stronger — and in the eyes of the world — become a more reliable partner in the pursuit of goals like poverty alleviation and socio-economic emancipation of its large population if it succeeds in convincing the world that it will follow a policy of zero tolerance for any militant group of whatever complexion or ideology to exist in its territory. It appears, after a cool analysis, that the rulers have realised the huge negative fallout of militant groups operating in Pakistan, and have disbanded some of these.

The “Howdy, Modi!” event should be an opportunity for Pakistan to take a critical look at some of its policies, both in the domestic arena and in the realm of external relations. Pakistan must continue to extend political and diplomatic support to the Kashmiris in their struggle to reverse the action India took in dismantling the special status of IOK. But at the same time, it must recognise that the decision of August 5 would be difficult to reverse for a government that was publicly committed to scrapping the special autonomy provisions for IOK. Pakistan must also realise that no regional country other than China will be willing to support its stance in the UN. Nor will the Islamic countries or the big powers. Islamabad must come to grips with the reality of India being a hegemonic power and powerful economy that few countries would risk damaging their relations with.

The fact that Modi’s action has won widespread support internally within India must not be ignored either. The backing of the masses, for ending the special status of IOK, has given the Modi government a tremendous boost, even though it has to be seen whether, in the long run, the policy was in India’s supreme national interests. Islamabad will have to incorporate these realities into its policy calculations. The real opposition to the move will have to come from the people of Kashmir.

If the iconic spectacle i.e. “Howdy, Modi!” is any guide, Islamabad has to reconcile with the fact that on issues such as Kashmir, it will not receive any significant support from the US or many other capitals around the world. Pakistani rulers have to be more down to earth in dealing with other nations. Global diplomacy is not about human rights; it’s about national interests, above all.