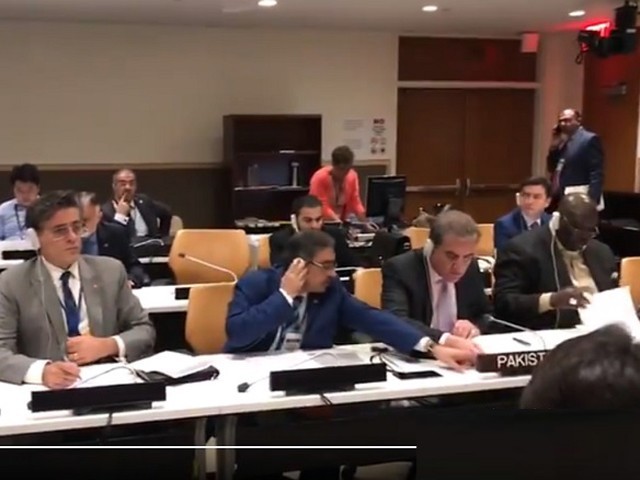 ISLAMABAD: The Organisation of Islamic Countries (OIC) on Wednesday asked India to reverse its decision of revoking the special status of Occupied Jammu and Kashmir and allow “full and free access” to international bodies, including OIC and UN, to independently investigate reports of “gross and systematic human rights violations taking place there.”

The statement by the 57-member bloc of Muslim countries was issued following a meeting of foreign ministers of OIC Contact Group on Kashmir held on the sidelines of 74th session of UN General Assembly in New York.

#OIC Contact Group on #Jammu and #Kashmir held a ministerial meeting on the sidelines of the 74th session of the UN General Assembly in #NewYork. #UNGA #UNGA74 pic.twitter.com/4YQoMmlaqW

Declaring Kashmir an internationally recognised dispute, the resolution demanded of India to immediately reverse its illegal Kashmir move and give firm assurances that no changes would be brought to the disputed territory till the final settlement in line with the UN Security Council resolutions.

The #OIC called on the international community to accelerate its efforts to provide critical assistance to the people of #Jammu and #Kashmir to realize their legitimate rights. #UNGA #UNGA74 pic.twitter.com/n6kesfB39o

This is the strongest statement issued thus far by the Islamic bloc since Indian move to do away with Article 370 that gave Jammu and Kashmir a special status. It also came against the backdrop of criticism that Muslim countries, barring few, have overall given either a muted or no reaction to India’s illegal annexation of Kashmir.

Prime Minister Imran Khan on Tuesday while thanking Turkish President Recep Tayab Erdogan, who raised the issue of Kashmir during his UN General Assembly speech, urged other countries including Muslim states to follow the suit and go beyond the political and economic considerations.

One of the reasons many Muslim countries particularly the Arab states opted not to condemn the Indian move was because of their economic interests in India.

Nevertheless, the adoption of unanimous resolution by the OIC in New York is being portrayed as diplomatic success for Pakistan as the member states not only endorsed Islamabad’s stance on Kashmir but also publicly voiced concern over the human rights violations in the Himalayan region.

The OIC Secretary General, Dr. Yusuf Al Othaimeen stressed that the issue of #Jammu and #Kashmir is one of the most important issues on the #OIC agenda. #UNGA #UNGA74 pic.twitter.com/IHmaRsB8qk

He said never before OIC issued such explicit statement on the longstanding Kashmir dispute. Qureshi noted that all OIC ministers expressed their views on Kashmir and he could not differentiate between Pakistan’s stance and what the Saudi foreign minister had stated during the meeting. “This should put at rest all the speculations,” Qureshi added while referring to the concerns that certain Muslim countries had not sided with Pakistan on Kashmir issue.

The joint communiqué also expressed grave concern that India’s actions aimed to change the identity and demographic composition of the occupied valley and to transform it from a Muslim-majority region into a Hindu-majority territory.

It also deplored the prolonged lockdown of the Kashmiri people, round-the-clock curfew and complete communications blackout in Occupied Jammu and Kashmir, and suppression of Kashmiris protesters who demand freedom from the Indian occupation.

Similarly, serious concerns were expressed over the arbitrary detention and arrest of thousands of people including Kashmiri leadership, professionals and peaceful demonstrators and their transportation to prisons and detention centres outside the valley.

“[The meeting also] deplored the indiscriminate use of force, live ammunition and use of pellet guns against unarmed protestors,” read the resolution. The OIC contact group reaffirmed its support for the legitimate struggle of the Kashmiri people for realisation of their inalienable right to self-determination and freedom from the Indian occupation.

The OIC called on the Human Rights Council to accept and implement the recommendations of UN OHCHR to establish a Commission of Enquiry to investigate human rights violations in IOK.

It declared Kashmir dispute the core issue between Pakistan and India and its final settlement, in accordance with UNSC resolutions and a UN supervised plebiscite, is indispensable for durable peace and stability in South Asia and beyond.

The OIC made the following demands to the government of Prime Minister Narendra Modi; rescind its unilateral illegal actions and reiterate its commitment to abide by the relevant UN Security Council resolutions, provide solemn assurances that it will not change the occupied territory’s demographic composition and not allow non-Kashmiris to acquire property or residency in Jammu and Kashmir, halt its human rights violations in occupied Jammu and Kashmir, including the use of force against peaceful demonstrators, especially the use of pellet guns, lift the curfew, allow peaceful assembly and freedom of expression, release all political prisoners, activists and abducted youth, repeal its draconian emergency laws, and withdraw its heavy military presence from Kashmiri cities, towns and villages and provide unhindered access to occupied Jammu and Kashmir to human rights organisations and international media to ascertain and report on the situation in the occupied territory.