WHO and Intern­ationa­l Commit­tee of the Red Cross were banned over 'suspic­ious activi­ties'
By Reuters
Published: September 25, 2019
Tweet Email 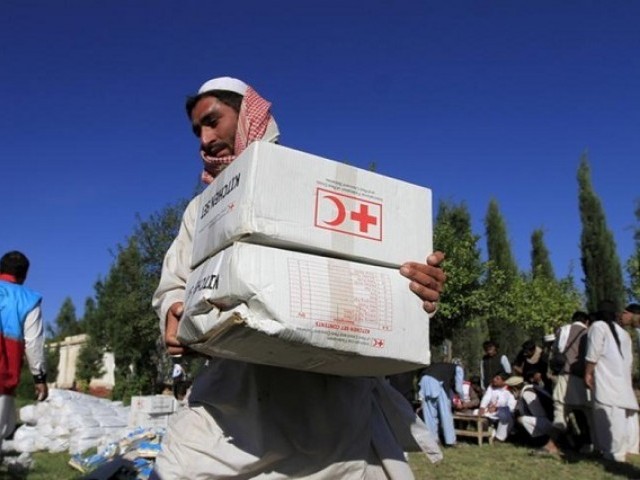 An Afghan man receives aid from the International Federation of the Red Cross and Red Crescent Societies after an earthquake, in Behsud district of Jalalabad province, Afghanistan. PHOTO: REUTERS

KABUL: Afghan Taliban have lifted a ban on World Health Organisation (WHO) activities in areas it controls, a spokesperson for the group said, reversing a stance that had been complicating efforts to eradicate polio.

The Taliban in April banned the WHO and International Committee of the Red Cross, citing their “suspicious activities” during vaccination campaigns, which threatened to deepen one of the world’s worst humanitarian crises.

The health arm of the United Nations (UN) has been carrying out a vaccination campaign in Afghanistan, one of just three countries where polio is still endemic.

“After realising its shortcomings and following constant contact and meetings with our representatives, the WHO received permission for their activities,” said Zabihullah Mujahid, a spokesperson for the Taliban in a statement.

In the statement, the Taliban gave a guarantee of safety for WHO staff but also set conditions for its return, including only doing health work, getting their permission before hiring workers and only carrying out polio vaccine campaigns in health centres.

Earlier this month, the Taliban also lifted its ban on the Red Cross, which has been providing medical support for more than 30 years.

Aid groups operating in Afghanistan stress that they do not take sides. The Taliban control more than half of Afghanistan’s 410 Afghan districts.

UNGA 2019: Iran refuses to succumb under US pressure