Amid the heatwave, rain provides welcome respite to Karachiites

Amid the heatwave, rain provides welcome respite to Karachiites 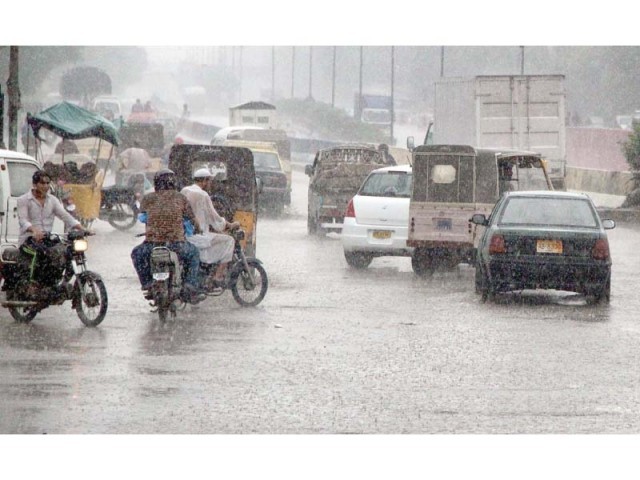 Commuters make their way through traffic during rain on Tuesday. PHOTO: ONLINE

KARACHI: As the heatwave persisted in Karachi for the fourth consecutive day, several parts of the city received intermittent showers that turned the weather pleasant, providing welcome, albeit temporary, respite to the citizens.

The humidity level on Tuesday rose up to 90%, due to which the real feel of the heat was much higher than the actual temperature. The weather remained hot and sultry for the better part of the day.

Later in the afternoon, several areas received rainfall, with Surjani Town receiving the highest at 27 millimetres. Some areas also witnessed thunderstorm along with heavy downpours, while the majority received moderate rainfall.

According to PMD officials, the heaviest rain was recorded as 27 millimetres in Surjani Town, followed by 21mm in Gulshan-e-Hadeed, 20.5mm in North Karachi, 14.6mm at Jinnah Airport, 8.5mm at the old airport, 8.5mm in Saddar, 8mm in Nazimabad and 2mm at Air Base Faisal and Air Base Masroor.

Strong and gusty winds started blowing the downpour, with the highest recorded wind speed at 70 kilometres per hour. Visibility was also affected due to the heavy downpour.

The highest temperature recorded on Tuesday was 35.5 degrees Celsius.

Chief Meteorologist Sardar Sarfaraz told The Express Tribune that the on-going heatwave affecting the city is caused by the low-pressure system that originated in Indian Gujrat.

The low-pressure system will travel closer to the city between September 26 and 27, which can cause the mercury levels to shoot up to 38 degrees Celsius.

The monsoon advisory issued by PMD has predicted that various districts of Sindh including Mirpurkhas, Umerkot, Sanghar, Hyderabad, Shaheed Benazirabad, Badin, Thatta, Dadu and different areas of Karachi. Sukkur and Larkana districts could witness heavy rain and thunderstorm from Friday to Monday.

According to the Pakistan Meteorological Department, heavy rains and windstorm are expected again today (Wednesday).

Plastic bags to be completely banned in Sindh: Wahab