A stern warnin­g issued ahead of the event saying lethal force will be used agains­t anyone who tried to trespa­ss
By AFP
Published: September 21, 2019
Tweet Email 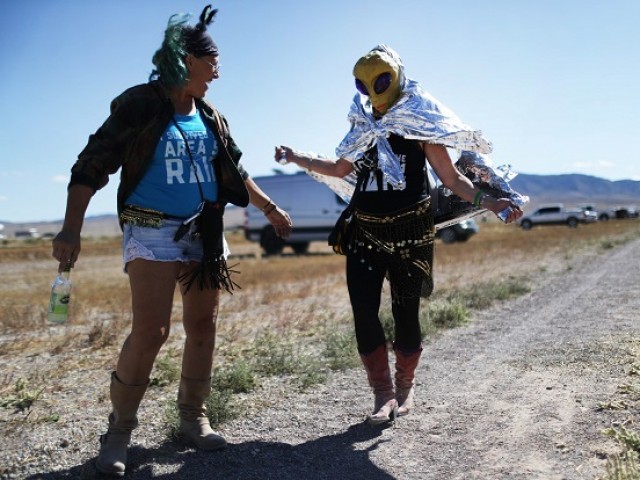 UNITED STATES: Several dozen people – rather than the two million feared – showed up on Friday near a secretive US military base in the Nevada desert, answering a meme-inspired Facebook event to storm the site in search of aliens.

The revelers, some wearing alien masks or tin foil hats, began gathering at the suggested time of 3:00 am Friday near the base known as “Area 51,” but they did not attempt to storm the heavily-guarded site.

One woman who attempted to pass under a gate was briefly detained as was a man who urinated nearby.

The event had been posted on Facebook as a hoax in June but it quickly got out of control when more than two million people answered the call to storm the remote base, long the subject of UFO conspiracy theories.

“They can’t stop all of us,” quipped the post, later taken down by Facebook. “Let’s see them aliens.”

The military issued a stern warning ahead of the event saying lethal force would be used against anyone who tried to trespass at the site, which the government only acknowledged existed in 2013.

The “Storm Area 51” invitation has meanwhile spawned weekend festivals in the two tiny Nevada towns of Rachel and Hiko which are located near the site, about a two and a half hours drive from Las Vegas.