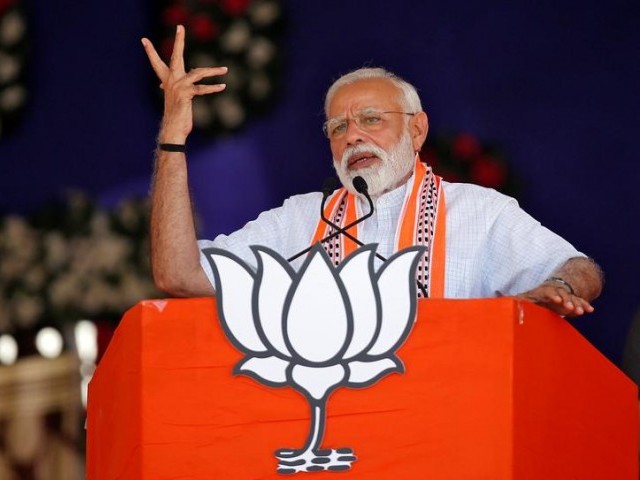 The highly contentious move comes after the August 5 revocation of occupied Kashmir’s autonomy by the right-wing BJP government. The entire valley has been under lockdown since then.

India is home to more than 19,500 languages, including 22 recognised in the country’s Constitution. Pushing for a common national tongue in India has been a contentious issue since the nation declared independence over 70 years ago.

Stirring up a hornet’s nest, Home Minister Amit Shah recently suggested declaring Hindi, mostly spoken in northern India, to be the country’s national language. This has also caused the southern and northeastern states to seethe with anger.

Shah made an appeal to unify India by promoting Hindi, the country’s most widely spoken language, as the national language. According to the 2011 census, 528 million people – 43.63% of the population in India – speak Hindi.

While India has two official languages recognised at the national level – Hindi and English – and 22 languages at the state level, the country does not have any national language.

Explaining the rationale behind declaring Hindi a national language, Shah said: “India is a country of many different languages, and each language has its own significance, but it is necessary to have a common language that becomes the mark of India’s identity globally”.

Earlier in June, India’s human resources development ministry unveiled the draft of a new educational policy, calling for making Hindi mandatory in all schools across India.

Since Prime Minister Narendra Modi took office in 2014, India has vigorously taken up not only promoting Hindi in the country but at the international level also.

According to estimates, it has spent INR484 million for the promotion of Hindi in world capitals and at the UN. The Foreign Ministry was tasked to make Hindi an official language of the UN.

A senior Indian official said that at the forthcoming UN General Assembly session, the Indian delegation will strive to convince members to adopt Hindi as an official language of the UN.

According to the UN procedures, getting Hindi accepted as an official language of the world body involves adopting a resolution endorsed by at least two-thirds of the members of the UN General Assembly. It also entails an additional expenditure to be borne by all UN member states.

In March 2018, India signed a memorandum with the UN Secretariat for an initial period of two years to boost the volume and frequency of Hindi content produced by the UN.

The inclusion of regional languages

India’s main opposition Congress said the minister was stoking fire, as India is a diverse country. Speaking to Anadolu Agency, Congress spokesperson Anand Sharma said that he advised the government not to stir up controversies.

“We should not stir up controversies on emotive and sensitive issues which have been settled by the maturity of India’s constitution-makers and the prime minister after independence, especially I am referring to first Prime Minister Pandit Jawaharlal Nehru,” he said.

The government proposal would only create strife and unrest in the country, Sharma added. Hindi is spoken by a substantial majority of India’s people, but English is equally important to be globally competent and to become a global leader.

“But whether it is Tamil, Kannada, Bengali, Odiya, Gujarati, Marathi, Punjabi, Urdu, they all are Indian languages. I am also Hindi-speaking. But I respect all other languages in the country,” Sharma said.

Political parties in India’s southern states of Tamil Nadu, Kerala, Karnataka, Andhra Pradesh and Telangana and even the northeastern state of Bengal and Assam have also opposed the move.

Most vocal opposition has come from the southernmost state of Tamil Nadu, where both the ruling AIADMK (a Dravidian party) and the opposition DMK (Dravida Munnetra Kazhagam) party expressed their surprise.

Tamil Nadu Education Minister KA Sengottaiyan asserted that his province is wedded to the teaching of a two-language formula (the mother tongue Tamil and English) and there is no scope of imposing Hindi.

Opposition DMK head MK Stalin also demanded that Shah to take back his statements on Hindi as they were detrimental to national unity and integrity.

“This is India, not Hindia. The DMK will not hesitate to unite states which might lose their legitimate rights on account of Hindi hegemony. The party’s high-level policy-making body will meet on Monday to decide on the future course of action,” he said.

Vaiyapuri Gopalasamy, an opposition leader popularly known as Vaiko, warned that imposing Hindi would “Balkanize” India. He referred to Pakistan’s attempts to impose Urdu on its eastern wing, which ultimately led to bloody agitation and then the creation of Bangladesh in 1971.

Even B S Yediyurappa, the chief minister of the BJP-ruled state of Karnataka, snubbed Shah’s “one nation, one language” proposal. He said: “All official languages in our country are equal. However, as far as Karnataka is concerned, Kannada is the principal language. We will never compromise its importance and are committed to promote Kannada and our state’s culture”.

Speaking to Anadolu Agency, the All India Majlis Itihad ul Muslimeen (AIMIM) chief and MP Asaduddin Owaisi said Hindi is not every Indian’s “mother tongue”. He even questioned the census figures, saying officials have been entering Hindi as the mother tongue of many people without even asking them.

He urged the current Indian government to respect the diversity and beauty of many languages dotting the country. Referring to Article 29 of the Indian Constitution, he said it recognizes every distinct language, script, and culture. “India is much bigger than Hindi, Hindu, Hindutva. There is unity in diversity that has kept India together over past 70 years,” he said.

Pinarayi Vijayan, chief minister of Kerala, another southern state, said the imposition of Hindi as the national language is contrary to the spirit of the country’s linguistic diversity. He said Hindu nationalist Rashtriya Swayamsevak Sangh (RSS)’s conception of “one nation, one culture, one language” is dangerous for a country like India. The state language of Kerala is Malayalam.

In India, the first anti-Hindi imposition agitation dates back to 1937, in opposition to the introduction of compulsory teaching of Hindi in the schools of the Madras Presidency, which now comprise southern states. Mandatory Hindi education was later withdrawn by the British governor of Madras, Lord Erskine, in 1940.

The adoption of a national language for India was a hotly debated issue during the framing of the Indian Constitution after independence. After three years of debate, at the end of 1949 the assembly arrived at a compromise called the Munshi-Ayyangar formula (after K.M. Munshi and Gopalaswamy Ayyangar).

The Dravida Munnetra Kazhagam (DMK) led the opposition to Hindi in Tamil Nadu. To allay their fears, Prime Minister Jawaharlal Nehru enacted the Official Languages Act in 1963 to ensure the continuing use of English beyond 1965. But it did not satisfy the parties, whish again led an agitation in 1965, leading to the ouster of the Congress government from the province. Since then, it has never managed to recapture power in the state.

In 2014, the Home Ministry ordered that “government employees and officials of all ministries, departments, corporations or banks who have made official accounts on social networking sites should give priority to Hindi”.

The order also asked central ministries to issue circulars and orders in Hindi. This move was immediately again re-sent by the southern states. Tamil Nadu Chief Minister J. Jayalalitha even ordered her secretariat to communicate in Tamil with the central government, in response to receiving any Hindi circular. The order was later revoked.

In another move aiming to unify the country, many ruling BJP leaders have been also arguing that the script of regional languages should be changed to Devanagari (Hindi script).

Two years ago, the central government offered to declare Kashmiri language a classical language to group it with Sanskrit, Tamil, Malayalam, Telugu, Kanad, and Odia, but with a rider to recognize Devanagari and ancient Sharada as its scripts, in addition to its current Perso-Arabic script. Scholars say if the script of Kashmiri or Kosher is changed, another popular language Urdu will not be far away, as its script is also in Persio-Arabic.

While many argue that recognition of Devanagari script for writing the Kashmiri language will make it more acceptable to Hindu Kashmiris now living outside Kashmir, others believe it would lead to the loss of all the literature produced over the past eight centuries.
Former Minister Saifuddin Soz alleged that the ruling class in Delhi is “deliberately” targeting the culture and language in Kashmir.

Regional languages to be made part of G-B school curriculum

Amit Ranjan, a visiting research fellow at the Institute of South Asian Studies of National University of Singapore, believes that a language flourishes only by attracting people and not through imposition from the above.

“One major attraction has been the Hindi film industry, which has popularized the Hindi language in non-Hindi speaking areas of India. When imposed by fiat by the central government, Hindi was resisted by the people of the south and east. When conveyed seductively by the medium of cinema and television, Hindi has been accepted by them,” he said.