Turning back the clock: Sindh reverts to bureaucracy-run system

Turning back the clock: Sindh reverts to bureaucracy-run system 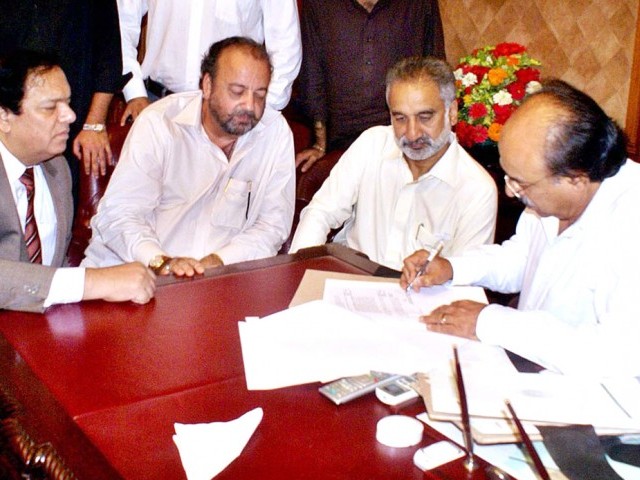 Acting Sindh Governor Nisar Ahmed Khuhro signed the three ordinances, one which restored the commissioner system, the second that replaced the 2001 local government system with that from 1979 and restored the 1861 police system.

As a result of the changes, the unified city government of Karachi will be dismantled and replaced by five districts: Karachi East, Karachi South, Karachi West, Karachi Central and Malir. The status of Hyderabad will also revert to its pre-2001 state.

The changes to the administration of the Sindh Police will mean the end of separate investigation departments within the police.

At a press conference in Karachi on Saturday, Sindh Chief Minister Qaim Ali Shah laid out the changes that would be made in how the province and its subdivisions would be governed.

Shah said that all of the “city district governments” established by former President Pervez Musharraf’s administration would be restored to their previous status. This includes not just Karachi but also Hyderabad, Jamshoro, Sukkur, Larkana, Jacobabad and Dadu.

“Now there will be no district nazim and we would get rid of this town system,” he said.

The governor restored the commissioner system through an amendment to the Revenue Act of 1967, which would give commissioners powers to run “divisions” – a sub-provincial level of government that was eliminated in all but geography by the Musharraf administration.

The system of civil servants being responsible to elected local officials will be abolished in favour of a system where federal bureaucrats from the powerful district management group (DMG) will have the authority to run districts. Sub-divisional magistates will replace town/taluka/tehsil nazims.

“Now we will appoint commissioners at the division level and deputy commissioners would run the district level affairs,” said the chief minister.

In terms of the way the police is governed, aside from changes to the titles of senior officers, the most critical change will be that “there will be no separate system for investigation, which has now been merged into the operations division,” according to the chief minister.

When issuing the ordinances, acting Governor Khuhro tried to paint the scrapped system as an ‘unpopular imposition’ on the people of Sindh by a former military dictator. Khuhro also claimed that many districts in Sindh were re-divided just to dilute the vote bank of the Pakistan Peoples Party (PPP).

“There was no local elected government system in place when the local government ordinance was issued. All these decisions were made unilaterally by Musharraf just to perpetuate his rule,” he said.

Given the deep unpopularity of the district commissioner system amongst supporters of the Muttahida Qaumi Movement (MQM), the second largest party in the Sindh Assembly, the system has also raised significant opposition.

The MQM has already summoned an emergency sitting of its central working group, the Rabita Committee, for today (Sunday) to discuss the revival of the commissionerate system.

In an attempt to address some of the criticism, Shah said that the government planned on presenting a bill in the provincial legislature to grant legal cover to the system, which would allow the MQM an opportunity to express their dissent.

“We will present this system in Sindh Assembly. We have a majority and will welcome the criticism of any political party,” he said.

The PPP has an absolute majority in the Sindh Assembly and can pass the bill without the support of any other political party. However, Shah hinted that the government may make amendments to the ordinances.