KARACHI: The current account deficit narrowed 55% to $1.29 billion in first two months (July-August) of the current fiscal year mainly due to a notable decrease in imports, but the reading came slightly higher than expected.

The central bank also revised up the current account deficit for July – the first month of the current fiscal year – by $99 million to $678 million.

More importantly, exports stood flat in July and August whereas worker remittances – a big source of financing the deficit in import payments and debt repayment – were slightly lower compared to first two months of the previous fiscal year.

“The two-month number suggests the cumulative current account deficit for the full fiscal year will reach $7.74 billion against the target of $6.5 billion agreed with the International Monetary Fund (IMF) under its $6 billion loan programme,” said JS Global Head of Research Hussain Haider while talking to The Express Tribune.

He, however, voiced hope that the authorities concerned would achieve the target as the available reading was only for the first two months and 10 months were still left.

“A further reduction in imports may help achieve the desired results,” he said, adding that revival in exports in dollar terms and improvement in worker remittances were not completely in the hands of the officials concerned. 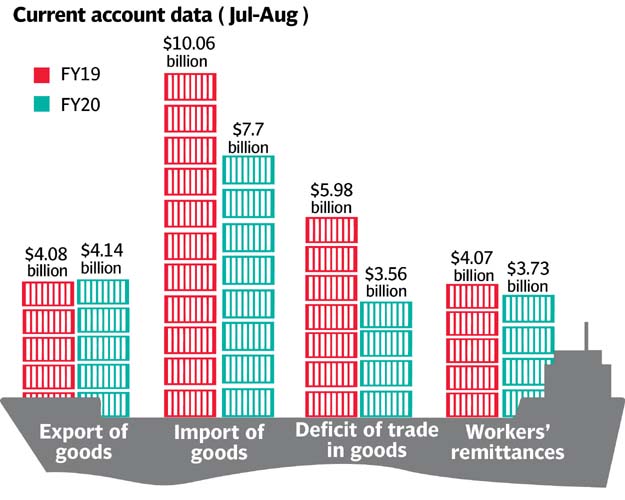 He pointed out that the two factors largely depended on global economic growth, which had slowed down due to the ongoing US-China trade war.

State Bank of Pakistan (SBP) Governor Reza Baqir said the other day that exports of Pakistan had improved in volumetric terms but remained low in dollar terms.

Unit prices of export goods have dropped globally and the decline in prices is not Pakistan-specific.

Haider was of the view that the primary concern among economists should be the improvement in financial account following which the current account deficit could be slashed significantly.

The financial account will improve with foreign debt inflows and privatisation proceeds.

The IMF working suggested that Pakistan’s foreign currency reserves would improve a net $4 billion by the end of current fiscal year 2019-20.

The State Bank of Pakistan (SBP) reported that the current account deficit stood at $2.85 billion in the first two months of the previous fiscal year.

The SBP data showed that the import of goods dropped 22% to $7.70 billion in the first two months of FY20 compared to $10.06 billion in the same period of last year.

Foreign direct investment (FDI) dropped 59% to $156 million in July-August FY20 compared to $332 million in the corresponding period of last year, the SBP reported.