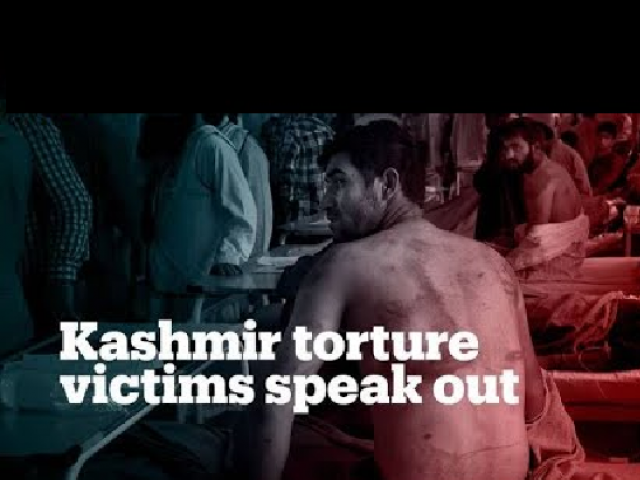 “The soldiers punched me in the gut until I vomited and urinated,” says Abid Khan, one of many young men who suffered at the hands of the Indian Army in occupied Kashmir, reported TRT World.

In an interview, victims said that the Indian armed forces subjected them to physical and psychological torture.

“What if they had committed be-satree and filmed that too? It is better to die in that case,” he said, adding that be-satree is various forms of sexual abuse.

He narrated his experience, noting every tiny detail from the time the soldiers entered his house to the time they took him to the camp.

A group of soldiers entered his home in Hirpora, Shopian district, grabbed his younger brother Suhail and shocked him in the chest until he passed out. They then pushed Khan into a vehicle, blindfolded him and took him to the campsite.

At the camp, he was stripped naked, waterboarded and forced to drink “horribly smelly” liquid. His hands and ankles were tied and he was hung from a pole where he was beaten with batons on his buttocks and back.

“As I struggled in pain, my wrists and ankles got bruised. The bruises became worse after every beating,” he said.

The baton marks can still be seen on his buttocks 32 days later.

“They passed electric currents through my body after dunking me in water. They did it several times. At one point, when I could take it no more, I feigned fainting. But another electric shock startled me. I prayed for death. Within no time I had passed out,” he said.

“When I regained consciousness, they hit my private parts with a stick.

“One officer told me ‘I will end your life now.’”

“He drew a red-hot iron rod close to my penis but stopped short of touching it. I cried a lot. His colleague told him ‘don’t do it. He has been married recently. After all, she is our sister too’. They pulled skin near my private parts with a plier. It still hurts when I urinate. Once my entire body was bruised they rubbed salt into the wounds. These mountains are witness to my ordeal. They have heard my cries,” he added.

Khan reported that before the torture started, an army officer told him that he had invited Riyaz Naikoo – the most wanted Kashmiri commander – to his wedding in July. The officer accused Khan of also building a hideout for freedom fighters in his home.

“I told him to go and bulldoze my home to the ground and if you find there is a hiding place anywhere, set the entire thing on fire. But if there is none, build me a fresh house. The [army] Major became angrier. He wanted me to confess, anything,” Khan said.

“He then told me to confess that Naveed Baba [a freedom fighter] has been hiding in the home of my neighbour Peer Sajad. I told him why would I falsely accuse somebody of something I know nothing about?”

Khan then said he was taken to a hospital on August 13 where several injections were administered to him, making the pain disappear. 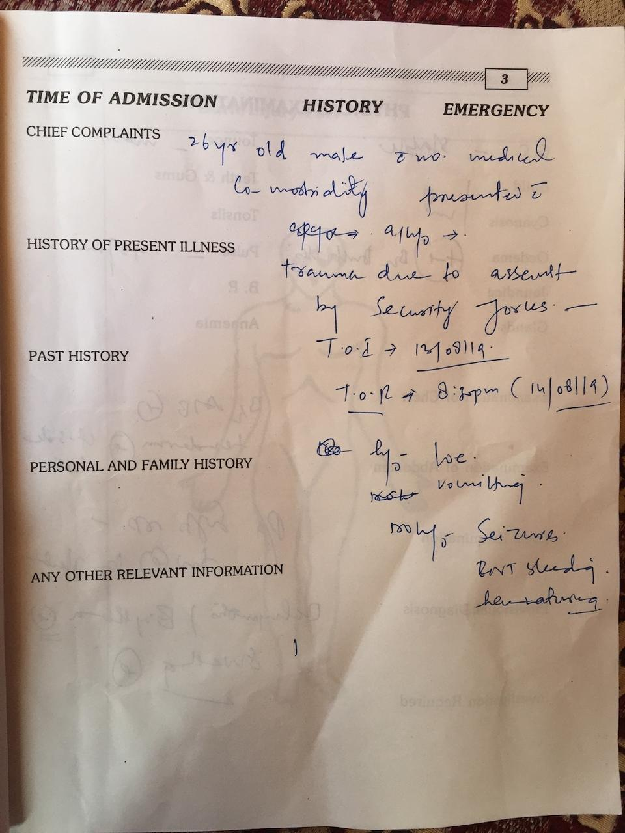 Khan was released in the evening but before letting him go, the officer threatened to detain his family members if Khan went to any doctor or filed a complaint with the police.

Unable to bear the pain, Khan decided to visit a hospital in Srinagar where his hospital medical record reads: “trauma due to assault by security forces”.

Another victim to the brutalities of the Indian occupying forces is Idris Malik of Bagander locality – who was told that “your neighbour” is injured. They demanded to know who has been taking medicine to the neighbour.

“How would I know? They beat me up the entire night with sticks and gave me electric shocks. My hands and ankles were tied with a rope and I was hung upside down from a bar. My face was covered with a cloth and several buckets of water were thrown at it. At one point I felt so cold that I feared my blood would freeze,” he said. 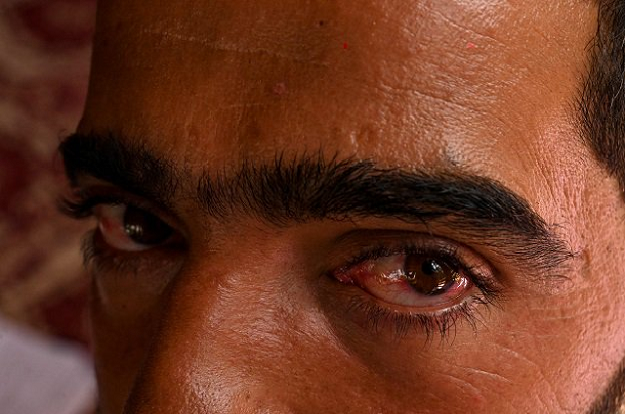 “In the morning leashed dogs were brought in to scare me. I was made to stand in the open and stare open-faced at the sun. My mouth dried up and when I asked for water they put a stick in my mouth and said it should stay in the mouth,” Malik said.

After multiple electrocutions and extreme torture, Malik was let go the next day and his medical records read: “multiple trauma on buttocks”.

Another victim Obaid Ashraf Khan was allegedly tortured by the army at a camp in the Pahnoo area.

Obaid was taken into a dark room where he was beaten with sticks and gun butts.

“I was beaten for a pretty long time with sticks and gun butts. From the neck to the feet no part of my body was spared. They punched my face and head. My wrists and ankles were tied with a wire and then they gave me electric shocks,” Obaid said.