The JUI-F has always used its social influe­nce in these region­s for politi­cal power
By Dr Raza Khan
Published: September 19, 2019
Tweet Email 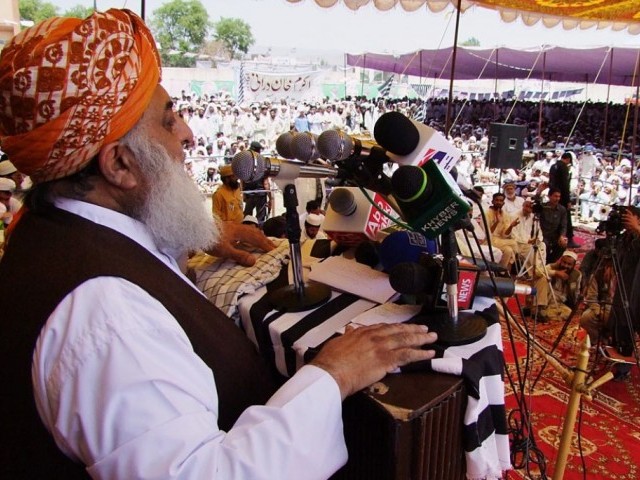 Of late, the Jamiat Ulemae Islam-Fazl (JUI-F) has stepped up its efforts to contact other opposition parties to launch a “decisive” agitation against the government of Pakistan Tehreek-e-Insaf (PTI). The JUI-F head, Maulana Fazlur Rahman, has vowed to launch an all-out campaign against the government of Prime Minister Imran Khan, and in this connection is strategising to lock down the capital sometime in October this year.

Whether the JUI-F has the strength and capacity to dislodge the government is debatable. The mainstream opposition party, the Pakistan Muslim League-Nawaz (PML-N), has pinned its hopes on the JUI-F and its leaders to work as a spearhead against the incumbent government and use the prowess it derives from young students of seminaries affiliated with the group. When the JUI-F head declared a few months back that it would launch a protest campaign against the government at the Centre, it did not sound like a serious threat. However with the changing political situation in the country due to rifts within the ranks of the PTI, the government’s near-failure to provide much-needed relief to the people, and instead making their lives more difficult due to its economic policies and prevalent and pervasive incompetence in the federal, Punjab and the Khyber-Pakhtunkhwa (K-P) governments, the JUI-F’s protest against the PTI government has become profoundly important. But here the question lies whether the JUI-F would be able to launch the protest. Secondly, how do the powers-that-be look at the anti-government movement of Fazl?

Historically, religio-political parties have launched important anti-government movements in Pakistan and been quite successful in weakening the governments against whom they spearheaded protests. On its part, the foremost reason for the JUI-F to launch an anti-government movement is that the PTI and PM Khan’s politics have inflicted irreparable damage on religious parties, specifically the JUI-F, by defeating its party’s candidates, including its chief, at places in K-P which were once its strongholds.

The JUI-F had been part of almost all governments since the early 1990s, irrespective of the party in the saddle. The party was even part of the PML-Q government of the Chaudhrys of Gujrat in Balochistan from 2002-2007, when General Pervez Musharraf had been in control. This was irrespective of the fact that an alliance of six religious parties those days, the Muttahida Majlis-e-Amal (MMA), which the JUI-F headed, ostensibly opposed Musharraf. Despite that, it simultaneously facilitated the extremely unconstitutional step of electing Musharraf as the president of Pakistan while in military uniform.

In the 2018 national elections, the JUI-F was nearly routed and Fazl was defeated and he could not make it to the National Assembly after a long gap. With this the JUI-F head also lost his long-held lucrative position of Chairman Kashmir Committee — an inconsequential body for promoting Pakistan’s stance on occupied Kashmir. Today, Fazl feigns support for the PML-N and the PPP “for the sake of democracy and the Constitution”. However, history suggests that the JUI-F has had nothing to do with either of the two but rather works to get as much governmental power for itself as possible. The JUI-F’s key motive is to grab power, however possible. For this, Fazl is even ready to do what someone wants him to do. It is no secret — thanks to WikiLeaks — that after the unprecedented success of the MMA in 2002 elections, in a meeting with then US ambassador to Pakistan, Anne Patterson, Maulana Fazl informed her he was ready to do whatever Washington would ask of him. In return, he had asked for US support in his bid to become the country’s prime minister. Although the US could not trust the wily politician; and while the MMA was nowhere near a majority of more than 171 National Assembly seats, Fazl still wanted to try his luck. The most sordid aspect of the JUI-F lust for power has been that while representing a specific school of religious thought it has brought the society to a brink of clash between liberals and conservatives.

PM Khan’s party gave the JUI-F considerable drubbing in K-P and in erstwhile Fata by bagging the majority votes and seats. Both K-P and Fata along with the Pashtun part of Balochistan have been traditional strongholds of the JUI-F. This has largely been due to the clerics’ social influence within the once ultra-conservative societies there. The JUI-F has always used its social influence in these regions for political power. Despite this, nationalist, moderate and progressive parties like the PPP, the ANP, the PkMAP and now the PTI have always got more support from the people in all of JUI-F’s traditional strongholds. This has prevented the JUI-F from having its own government in K-P or Balochistan. The only instance when the JUI-F could have its chief minister in K-P was in 2002 when the MMA won a majority there. However, the treatment meted out to the rest of the religious parties including the JI and the Jamiat Ulemae Islam-Sami compelled both of them to withdraw from the alliance but not before enjoying electoral power for five years.

Remaining out of power has added to the frustration of the JUI-F and therefore it is doing its utmost to bring down the PTI government to create space for itself in the power corridors.

How to pull Karachi from the brink?