Order returns without a shot fired by Rangers

Order returns without a shot fired by Rangers 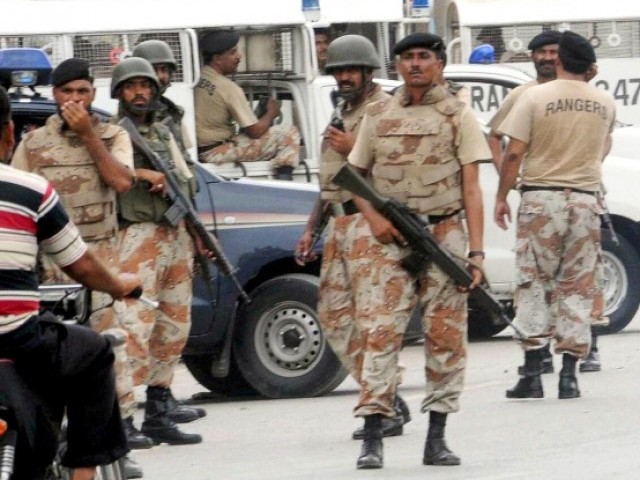 Sindh Rangers had earlier received a written notification for taking charge of the troubled areas, to conduct operations and take all ‘necessary’ actions to restore peace. PHOTO: EXPRESS/FILE

Surprisingly, the fire quelled quicker than it had started.

Within a few hours of Rangers taking control of violence-hit areas, without any major resistance, Karachi returned to normalcy on Saturday.

At least three more people were killed, and nearly half a dozen wounded, in separate acts of violence on Saturday but commercial activities resumed in the metropolis and public transport was seen plying on the streets.

With the three latest killings, the death toll of victims from five days of violence rose to 110.

Orangi, which was the starting point of the recent wave of violence, was taken over by the Rangers in an operation lasting a few hours, without firing a single shot.

The miscreants were scared and offered no resistance to the heavy contingent of paramilitary personnel and commandos, explained the Rangers spokesperson Major Bilal.

The residents, however, were not convinced.

“Where did the militants, who killed innocent people for four days at a stretch, disappear?” questioned a resident of Qasba Colony.

“Militants take up positions on the hills, wreak havoc on innocent people for four days while the police and Rangers stay away,” said another resident, wondering if this was all sorcery on the part of militants or the law enforcement agencies. Others were sceptical still. They said the entire episode was a farce.

Sources in the Rangers, however, said they entered the violence-hit areas after receiving a written notification from the government.

“This is the government’s fault. If they had issued the notifications earlier, we would’ve walked in earlier,” the sources said. A top police official, on condition of anonymity, said the Rangers were simply lying low due to its reputation following Sarfaraz Shah’s murder.

They already have the powers to step in along with the police, he said.  They did not need a notification, he added.

Who are the detainees?

City police chief Saud Mirza said the police have arrested another 157 suspects across the city.

Sources said that the Rangers have detained nearly two dozen people in Orangi.

Most of the people detained, they claim, were uninvolved in the violence. “All the people the Rangers detained were those returning home once things returned to normal,” claimed a resident. “The detainees do not include the militants that were holed up in the hills,” the resident added.

Rangers spokesperson Major Bilal, however, refuted the charge. “A huge cache of weapons has been recovered from the detained people,” he told The Express Tribune.

The detainees are being interrogated and those found innocent would be released, he said.

Rangers personnel and commandos would remain deployed until a change in orders, he added. Bilal also added that over three dozen trapped families were shifted from Kati Pahari and Qasba Colony to safer locations in armoured personnel carriers.

Six wings of the force, including the Rangers’ anti-terrorist wing, participated in the operation to clear the affected areas from miscreants and rescue the trapped families, the official said.

He added that they have contacted the concerned authorities to restore the supply
of water, electricity and other necessities in the affected areas.

An activist of Muttahida Qaumi Movement (MQM) was gunned down in PIB Colony close to his residence. The victim, identified as thirty-year-old Waheed Patel, was associated with the MQM Unit 57. He was taken to Jinnah Postgraduate Medical Centre (JPMC) where doctors pronounced him dead.

He appealed to all political parties of Sindh to dispense their responsibilities for bringing about peace in the city, said Dr Sattar.

Due to an editing error, an earlier version of this article contained the phrase “He was taken to Jinnah Postgraduate Medical Centre (JPMC) where doctors pronounced him death.”

This has been changed to “He was taken to Jinnah Postgraduate Medical Centre (JPMC) where doctors pronounced him dead.”