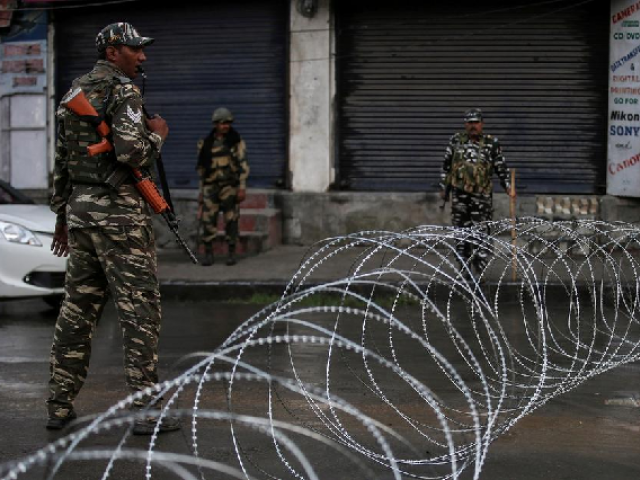 Human Rights Watch on Monday urged the Indian government to “immediately release detained Kashmiris who have not been charged with a recognizable offense”.

HRW’s latest report, India: Free Kashmiris Arbitrarily Detained, documents the detention of over 4,000 Kashmiris, including politicians, activists, separatist leaders, lawyers, and journalists, who have been held in detention camps since India stripped occupied Kashmir off its special status on August 5.

Approximately 400 elected officials and political leaders, as well as former chief ministers of Jammu and Kashmir belonging to the National Conference and the Jammu and Kashmir People’s Democratic Party have also been detained.

The human rights watchdog states that many detainees have not been allowed to contact their families or lawyers.

“Anyone who has been detained in Kashmir without evidence of a crime should be immediately and unconditionally released,” South Asia director at Human Rights Watch Meenakshi Ganguly said adding that it was essential for authorities to allow every detainee access to lawyers and family members.

According to an official document seen by Reuters, as of September 6, the authorities had arrested more than 3,800 people, and of them, 2,600 had been released. “The government should release a list of all detainees and their whereabouts,” the human rights watchdog urged.

Screams in the night in occupied Kashmir

The strong-worded report documents the story of Shah Faesal of the Jammu and Kashmir Peoples’ Movement. Faesal was prevented from leaving India and detained after he criticised the brutish actions of the Indian government.

A senior Indian police officer said on Twitter that Faesal was spreading ‘hopelessness’ instead of accepting ‘new realities’. And the authorities told the court in response to a habeas corpus petition that he was detained for instigating people against the country.

“Neither allegation is a sufficient basis for detention,” stated the Human Rights Watch.

Faesal remains in custody. On September 13, Faesal withdrew his petition in solidarity with other detainees that have no legal counsel or other remedies.

On September 5, the Indian Supreme Court ordered the authorities to shift the ailing leader of the Communist Party of India, Mohammed Yusuf Tarigami, who is under house arrest in Srinagar, to a hospital in Delhi.

The party’s general secretary had filed a petition that Tarigami was unable to receive adequate medical care due to restrictions and “nobody was allowed to exit or enter the house.”

The court also ordered Indian authorities to allow others, including the daughter of the detained former chief minister, Mehbooba Mufti, to visit their relatives.

The HRW report also details the case of Srinagar’s Mayor Junaid Azim Mattu who was released from house arrest and allowed to travel to Delhi for cancer treatment.

While out of detention, Mattu criticised Indian government’s actions in IOK in interviews with the media.

On September 3, when he returned from his treatment, Mattu was again placed under house arrest.

“The persecution of mainstream workers is shocking beyond belief,” Mattu told the media, adding “Several of my party men are under detention.”

The Indian security forces have detained the family members of suspects, in cases when they failed to locate the suspects, citizens of the occupied valley told HRW.

“This amounts to collective punishment, in violation of international human rights law,” the report states.

Another case the HRW has shed light on is the case of India’s national security adviser, Ajit Doval.

On September 7, Doval told local Indian media that the government had no plans of releasing the detainees. “We have been very careful about the entire situation,” he said. “No human right has been violated.”

However, the International Covenant on Civil and Political Rights, to which India is a party, prohibits arbitrary arrest and detention. HRW thus urges the Indian government to release a list of all detainees and their whereabouts.

The report asks the United Nations (UN) Human Rights Council to urge India to end the collective punishment on Kashmiris and act on recommendations in the report of the UN high commissioner for human rights.

“India is making a mockery of its human rights commitments by denying Kashmiris a voice in their future, jailing political leaders, and suspending basic freedoms,” Ganguly said. “The government’s heavy-handed measures are only making a bad situation worse.”

The Indian government has continued the shutdown of internet and mobile phone services, while simultaneously banning public meetings and imposing restrictions on freedom of movement since August 5.