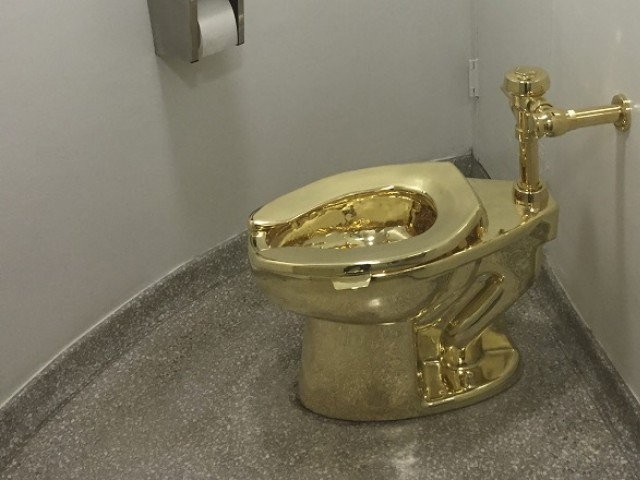 LONDON: The artist whose solid gold toilet was stolen from Britain’s Blenheim Palace said he hoped it had been taken in a “Robin Hood-inspired action”, as police scrambled on Sunday to locate it.

Italian artist Maurizio Cattelan told the New York Times that when he first heard news of Saturday’s pre-dawn theft of his fully-functioning work “America”, he thought it was a prank.

“Who’s so stupid to steal a toilet? I had forgotten for a second that it was made out of gold,” he said, adding: “I wish it was a prank.”

Cattelan has described the 18-carat gold work, famously once offered on loan to US President Donald Trump, as “one-per cent art for the 99 per cent”.

“I hope it still is. I want to be positive and think the robbery is a kind of Robin Hood-inspired action,” he said, referring to the character of English folklore who stole from the rich to give to the poor.

Blenheim Palace chief executive Dominic Hare meanwhile revealed that the toilet, which was only put on display at the English stately home on Thursday, had been valued at around $5 to $6 million.
He told the BBC that the palace, the birthplace of wartime leader Winston Churchill and a Unesco World Heritage site, had a sophisticated security system.

But he added: “Clearly we need to challenge ourselves on that.”
He also said it was “not out of the question [that it] would be melted down” by the thieves.

The gang, who had at least two vehicles, left behind flooding that damaged the building.

Police arrested a 66-year-old man who remains in custody, and said Sunday they were still following a number of lines of inquiry.

The toilet was one of the star attractions in an exhibition of Cattelan’s works, with visitors able to book three-minute time slots to use it.
When the work was on display at New York’s Guggenheim museum, more than 100,000 people lined up to use the loo during the course of a year.