Ambass­ador thanks people for taking intere­st in noble cause
By DNA
Published: September 15, 2019
Tweet Email 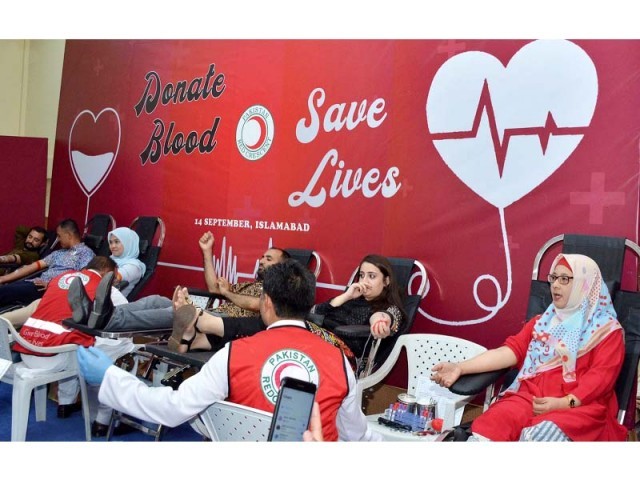 A number of diplomats and members of the civil society donated blood. It was the fourth blood donation camp.

Ambassador of Indonesia Iwan S Amri initiated this exercise back in 2016 which has become a regular feature now.

Hundreds of people hailing from various walks of life, especially the youth, are invited every year to donate blood. This year too, the majority of blood donors comprised youth including girls. Students from CITHMS, Bahria University and International Islamic University, Islamabad also donated blood.

Wife of Indonesian ambassador other staff members were the first ones to donate blood.

The blood collected at these camps is provided to the needy and poor patients across the country.

Ambassador Amri while speaking on the occasion thanked the Pakistan Red Crescent Society for being partners with the Indonesian embassy in this noble cause.

The ambassador thanked people for their continuous support in their efforts to further strengthen the Indonesia-Pakistan bonds of friendship through these initiatives of sharing and caring.

Ambassador Amri said the initiative of blood donation camp was a gesture of solidarity, friendship and brotherhood with our Pakistani brothers and sisters.

Indonesia and Pakistan have wonderful history of fraternal relations and this collaboration between the Indonesia embassy and PRCS aism to nurture the culture of caring and sharing for saving the lives of our Pakistani friends in need.

On ambassador’s request one minute silence was also observed for late BJ Habibie former President of Indonesia who passed away on September 11.

Ambassador told the audience that the late President Habibie was known as father of Indonesia technology and a pioneer of Indonesian aviation industry.

He was also one of the founders of the Indonesian Muslim intellectuals Association and became its patron. He became Minister of Research and Technology in 1978 and occupied that position consecutively until 1997.

Ambassador further said during his rule the Indonesia economy remained on track amid global crisis with his efforts and regional autonomy started that changed a centralised system into a decentralised one.

Ambassador Amri said as a human being what could be more satisfying for them than contributing in saving the life of a fellow human being.

“The presence of so many participants especially the young students in this camp reflects that you fully realise how important donating blood is. In fact voluntary blood donors like you are truly the lifeline for many patients”, he added.