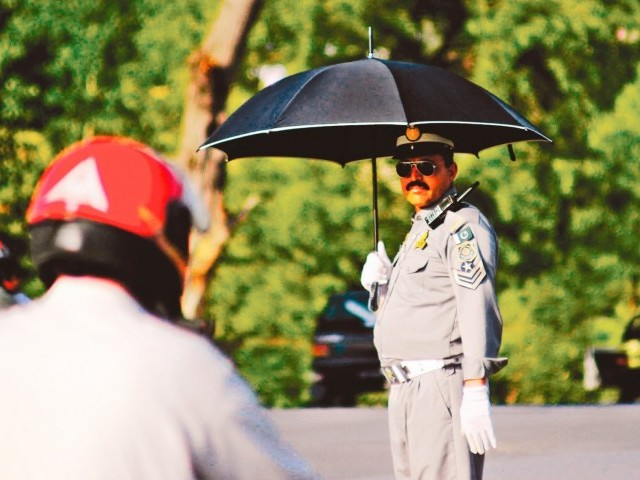 ISLAMABAD: A wrong U turn in business deal has landed Islamabad Traffic Police (ITP) and two banks in court.

A complainant has claimed that the capital police have been issuing e-tickets from an application acquired illegally. Though, a senior officer of the force told The Express Tribune that ITP was a buyer any wrongdoing was responsibility of the vendor.

Islamabad West Civil Judge Imran Sikandri issued a stay order on the petition of an Information Technology firm, Cell Vas which claimed that ITP along with two banks were using their source code in e-ticketing application.

The court has sought clarification from opposing parties at the next hearing on September 17.

According to the complaint, a manager of branchless banking department of a private bank, approached Cell Vas for developing an e-ticketing mobile application for ITP and the parties reached an agreement in Rs5 million.

The IT firms developed the application and handed over related documents to the private bank. The bank and ITP organised a launching ceremony next day without paying amount to Cell Vas after which the firm refused to give operating rights to parties.

The manager, however, contacted another IT company, handed over the source code to them, which developed a copied similar e-ticketing application.

The current application was prepared such that the private bank was receiving 10-15 per cent charges on total amount of every ticket from citizens.

Further, Cell Vas filed a petition in a civil court in Islamabad through Barrister Raja Jibran after which the Islamabad Civil Judge Sikandari issued a stay order and barred ITP and both banks from further using the application.

In this regard, ITP SSP Farrukh Rasheed told The Express Tribune that ITP was not related to any private bank and had made an agreement with a government bank.

Islamabad High Court (IHC) has directed the government to appoint Chairman Pakistan Agricultural Research Council (PARC) in accordance with the given rules.

The applicant, Zafar Iqbal Chaudhry, had informed the court in his petition that the president of the country had issued a notification May 15 appointing Ayub Chaudhry as Chairman Pakistan Agricultural Research Council (PARC) while l period of his appointment had already lapsed on August 11.

The court said that the federal government would be at liberty to make an interim arrangement as such that ‘day to day working of council does not suffer’ while the arrangements should be strictly in accordance with the provisions of PARC Act 1981.

The Deputy Attorney General (DAG) told the court that they had forwarded a summary to the President of Pakistan with recommendations regarding appointment of eligible person to the post of Chairman PARC. He also requested the court for adjourning the case for a week in order to file a written report which the court accepted.

The next hearing would be conducted on September 19.