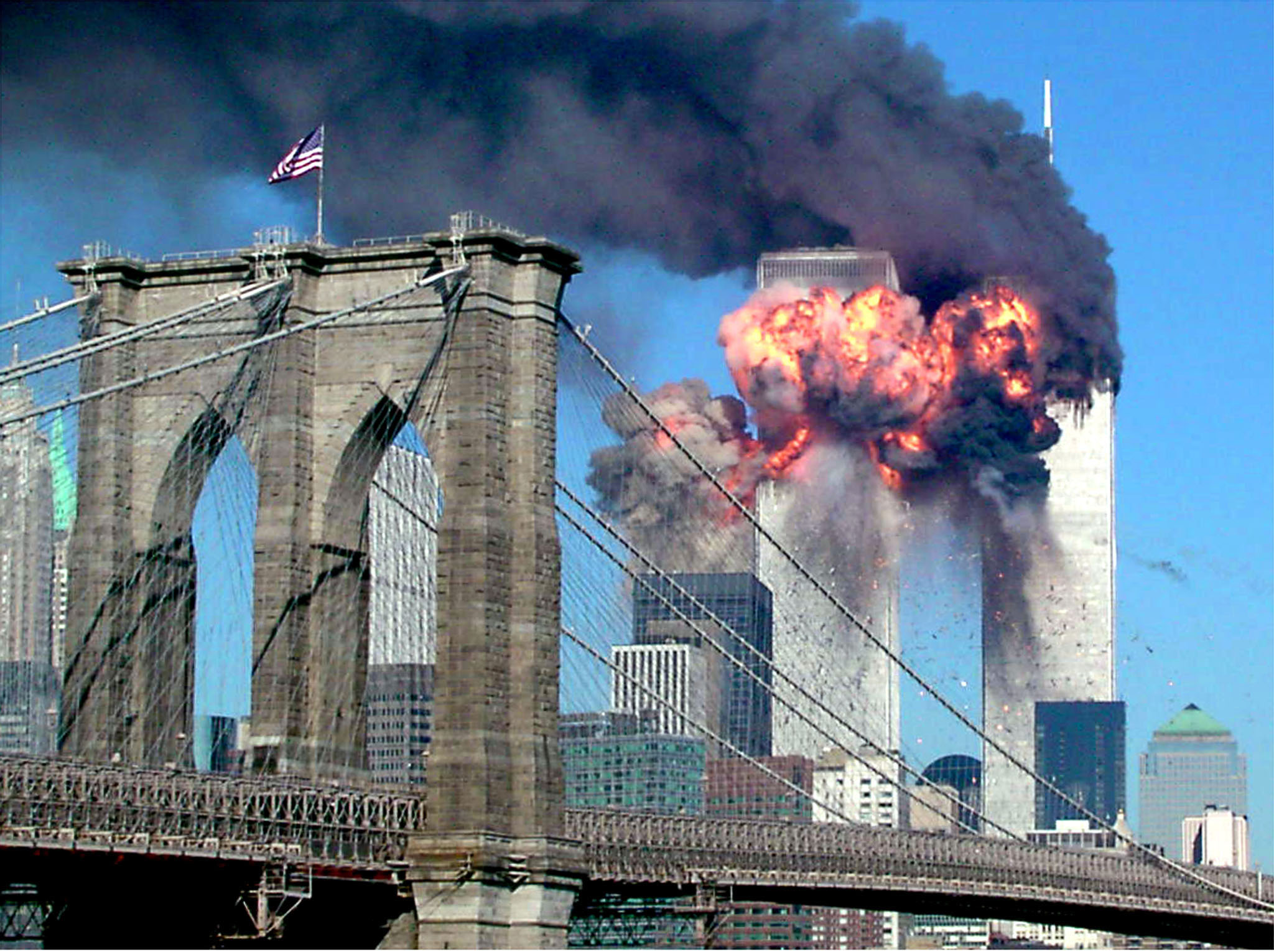 The second tower of the World Trade Center bursts into flames after being hit by a hijacked airplane in New York in this September 11, 2001 file photograph. Al Qaeda leader Osama bin Laden was killed in a firefight with U.S. forces in Pakistan on May 1, 2011, ending a nearly 10-year worldwide hunt for the mastermind of the Sept. 11 attacks. The Brooklyn bridge is seen in the foreground. REUTERS/Sara K. Schwittek/Files (UNITED STATES - Tags: POLITICS CIVIL UNREST) - RTR2LVZB
KARACHI: How the world saw the US and how the US saw the world changed drastically upon September 11, 2001.

The attacked was owned by Al-Qaeda, which put Muslims around the world on map for racism, discrimination and abuse.

As 9/11 observes its 18th year, many have come forward with their accounts of the ill-fated day. Some recalled family and friends they lost, while others opened up on how they survived the massive debris that look over a large chunk of Manhattan as the towers fell.

Twitter lit up with #AfterSpetember11 stories and it was heart wrenching, to say the least.

If you haven't seen it, I recommend reading the tweets under the #AfterSeptember11 hashtag. Disturbing, but important, stories from the US from Muslims -- or people "suspected of being Muslim" -- about being harassed, insulted and physically attacked immediately after 9/11.

#afterseptember11 age 11 my best friend cried in the middle of gym because kids were being assholes and calling her a terrorist. Then a teacher called her out in the middle of class and shamed her interest in religion.

#afterseptember11 the Libyan restaurant & grocery where I worked rearranged the entire store to put the refrigerators against the front window to protect customers from people shooting at the store.

#afterseptember11 A “friend” started to ask people “Doesn’t he look like Bin Laden?” (Referring to me)
Aggression started.

#AfterSeptember11 my classmates never looked at me the same. On my eleventh birthday, September 10th, I was just a kid. By September 12th, I was a threat.

My father was bullied and harassed by his co-workers to the point where he tried to kill himself. My brother was beaten up at the tender age of 5.
9/11 happened in USA but the impact was felt the world over #afterseptember11 https://t.co/06epPjXQ0p

#afterseptember11 my brother came home from elementary school with two black eyes and food stains all over his clothes as a result of a food fight targeted towards him. He was 11 💔 https://t.co/3MZsaXtT44

Since we’re sharing our experiences, #afterseptember11 my second grade teacher tried to make me fail 2nd grade. and from k-2nd grade people used to literally come up to me a be like “my parents said we can’t be friends anymore because you’re different.”

#afterseptember11 I was 12 that day and started to make sure it was very clear that I was Puerto Rican and Black. Because too many classmates would tell me I “looked Muslim” or “looked like a a-rab” or even the parent of the boy I like said “you ain’t one of those a-Rabs right?” https://t.co/xe2urC7Lev

#afterseptember11 went home from preschool with my mom to find my father crying in the living room next to shattered glass from the window. his car's tires had been slashed too. it was the first time i saw both my parents cry. my mom and i moved out of new york the month after

Have you faced a similar ordeal after the attacks? Share it in the comments below.