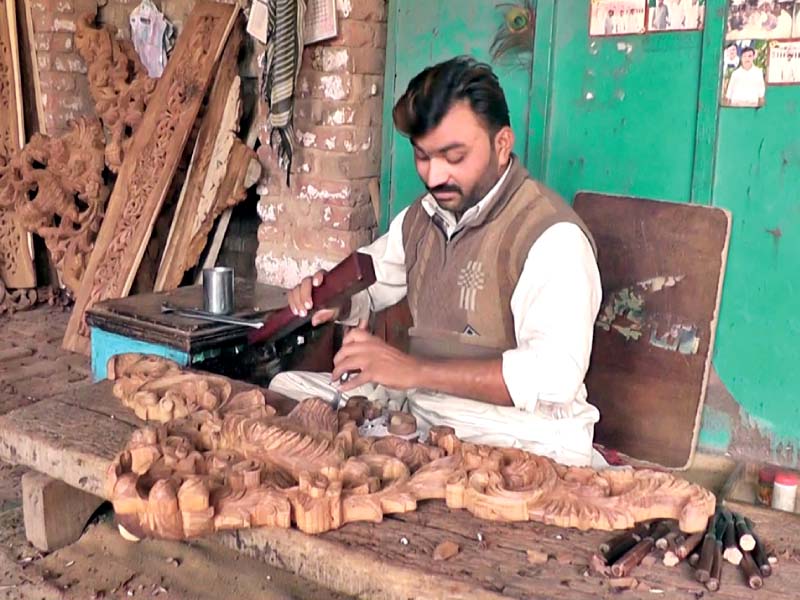 From the cutting of wood to carving and polishing, no machine is used. PHOTO: EXPRESS

FAISALABAD: No matter how big, small or well-constructed a home is, a dull or distasteful interior and furniture can ruin the entire character. When it comes to buying the finest wooden furniture, the city of Chiniot has most home owners covered with its creations. The furniture has long been a favourite among the masses for various reasons.

Furniture manufactured in Chiniot is not only famous in the country, but its demand is also growing on an international scale. The main reason is the use of Sheesham wood which originates from the Indian Rosewood tree or Dalbergia Sissoo and is known for its durability. “Furniture made of Sheesham is not only durable, but also resistant to termites. This is why people prefer it to other types of wood,” Ali Ijaz tells The Express Tribune. He is an artisan who has been associated with Chiniot’s wooden-furniture industry for the past 20 years.

“Besides that, the artisans of Chiniot are considered highly skilled in creating exquisite wooden craftwork. So much so, that the furniture-making industry in the city has been at its zenith for the past fifteen years.”

A stroll through the Mohallah Aali of Old Chiniot – an area filled with numerous furniture showrooms and workshops – leaves most visitors mesmerised by the artistic prowess of the workers.

The market is home to some of the best furniture designs. From the cutting of wood to carving and polishing, no machine is used and the handiwork renders an exquisite subtlety to the end product which is not to be found elsewhere.

“With the advancement of technology, manual work is fast being replaced by machines. Nevertheless, workers in Chiniot stick to traditional handwork which has passed been passed down through the generations,” Ijaz shared.

“Handwork is the main reason furniture and other wooden items cannot come close to those produced in Chiniot,” he proudly claimed.

The popularity of the shops at Mohalla Aali can be gauged from the fact that people belonging to the political elite of the country regularly purchase wooden furniture from the market. Some prominent customers include the former prime minister of Pakistan Zafarullah Khan Jamali, the current Chief Justice of Pakistan Asif Khosa and the ex-president of Azad Kashmir, among others.

Despite the popularity and unmatched quality of products manufactured in Chiniot, workers and businesspersons associated with the wooden furniture industry have been experiencing problems lately due to policies of the government.

“Ever since the new government has come into power, the price of wood has skyrocketed,” Ijaz remarked. “I am a PTI supporter and voted for a change because I had high hopes from the government. At present, however, things have become increasingly harsh for poor workers,” he lamented.

Ijaz added that Chiniot doesn’t produce raw wood and has to procure Sheesham from other cities.

“Getting wood from other cities makes the end products costlier as it is. To top it off, the government has imposed hefty taxes. Naturally, the price of furniture has also gone up and this has adversely affected our sales,” he said.

“The current circumstances have made it increasingly difficult for workers to earn a livelihood. Therefore, I request the government to do something to save thousands of poor artisans from becoming jobless,” he concluded.