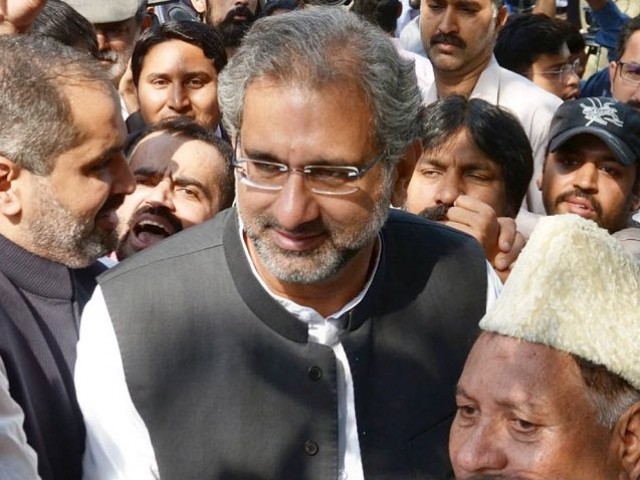 The two Pakistan Muslim League-Nawaz (PML-N) leaders are accused of involvement in granting a 15-year LNG contract to a Qatari company in violation of rules and of causing losses to the national exchequer.

Accountability Judge Muhammad Bashir, who heard the NAB’s plea for extension in Abbasi, Miftah and Pakistan State Oil (PSO) managing director Imranul Haq’s remand, granted the request to extend it two weeks but added that no further extensions in remand would be granted.

Abbasi was arrested on July 18 while Miftah has been in NAB custody since August 7 in connection with the case that was reopened in 2018.
The former prime minister, meanwhile, repeated his party’s accusations that NAB had become a tool for the government to persecute the opposition, while also echoing the sentiments of the chief justice who had commented a day that the accountability process was losing its credibility.

“Allow them a remand for 90 days so that NAB is satisfied. The bureau has no clue regarding the case,” said Abbasi while addressing the court. “The issue has been politicised.”
He also put speculations to rest by saying that no deal was being made with NAB.

During the hearing, Abbasi’s counsel requested the court to designated two days every week for the legal team to sit down with their clients while accusing the NAB of creating hurdles in the meeting.

The former finance minister’s lawyer also made similar accusations against the anti-corruption watchdog, claiming that Miftah was being held in solitary confinement for at least 23 hours every day. “He should at least be permitted to have his meals along with Shahid Khaqan,” Miftah’s lawyer pleaded.

He also argued against the extension in remand, saying the court had granted an 11-day remand earlier so extension of two weeks is unjustified.

Responding to this, the NAB prosecutor maintained that Miftah was linked to just one case.

The prosecutor also requested the court for extension in the remand of the PSO’s managing director purportedly for further investigation.
The investigation officer maintained that Haq had undergone a series of medical tests and his reports, including sugar level, appeared to be normal.

Later, the court in its order announced 14-day extension in the physical remand of Abbasi, maintaining that it was the final extension. Miftah Ismail’s remand has also been extended one last time until September 26. The court has summoned the suspects in the next hearing on September 26.