CTD has repeat­edly been accuse­d of pressu­ring the victim­s' family to drop the case
By News Desk
Published: September 12, 2019
Tweet Email 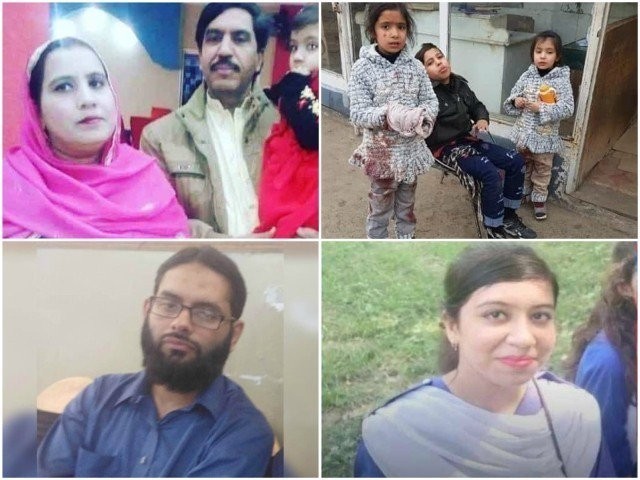 Facts will only be uncovered with the formation of judicial commission, maintains family. PHOTO: FILE

The eyewitnesses and main complainant in the Sahiwal shooting case have refused to identify the suspects before an anti-terrorism court in Lahore.

According to Express News, Judge Arshad Hussain Bhatti heard the case pertaining to the murder of four people, including a woman and a minor, by Punjab Police’s Counter-Terrorism Department (CTD).

Three of the victims were later found out to be an innocent family – Khalil, his wife Nabeela and daughter Areeba – while the fourth victim, Zeeshan, was accused of having links to terror groups.

While recording their statement before an ATC on Wednesday, Khalil and Nabeela’s three surviving children – Umair, Muniba and Jaziba – said they could not identify the CTD officials who shot their parents.

Jalil, who is Khalil’s brother and the main complainant in the case, also declined to identify the suspects saying he was not present at the scene of the shooting.

The court issued summons to more witnesses and ATC judge adjourned the case until September 13.

On January 19, the CTD claimed in a statement that they signalled a car and a motorcycle to stop near Sahiwal Toll Plaza on GT Road, but they did not pull over and instead opened fire on the police.

The CTD officials retaliated and four people, including two women, were killed by the “firing of their own accomplices” in the ensuing firefight, according to the CTD.

Officials claimed the operation was a follow-up of the January 15 Faisalabad raid and that they were tracing two wanted terrorists of Da’ish, Shahid Jabbar and Abdur Rehman, who were listed in the ‘Red Book’.

While the CTD dubbed it an encounter, the victims’ family maintained that they were going to attend a wedding. The family’s claim proved true as it later transpired that except for Zeeshan, all other occupants of the car were innocent.

Khalil and Nabeela’s other children – Umair, Muniba and Jaziba – were also wounded in the operation.

A joint investigation team formed to probe into the incident confirmed that the family was innocent and that the CTD officials were responsible for their killing.

Subsequently, the Punjab government removed some top CTD officials and suspended others, while announcing that five CTD officials responsible for the killings would be tried on terrorism and murder charges.

It may be mentioned here that the CTD has repeatedly been accused of pressuring the victims’ family to drop the case.

Due to apprehensions expressed by the victims’ family over the JIT, the Lahore High Court ordered a judicial inquiry.  The judicial inquiry led by civil judge-cum-judicial magistrate Shakeel Goraya recorded the statements of 49 people including eyewitnesses, CTD suspects amongst others.