Going to salons can be a stress­ful or serene experi­ence, but salon owners are now aiming to make it more of the...
By Saadia Qamar
Published: June 11, 2010
Tweet Email 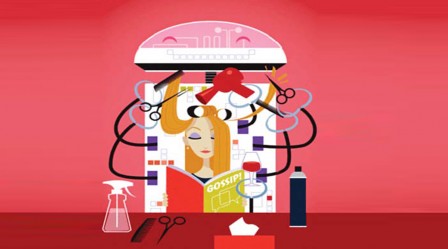 KARACHI: Going to salons can be a stressful or serene experience, but salon owners are now aiming to make it more of the latter.

In an interview with The Express Tribune magazine, Bina Khan said that over the years she has trained her staff on how to behave with clients and maintain proper etiquette regardless of what the client says.

However, it is very difficult to handle rude and impolite clients who come for services but treat the salon staff very harshly. Daulat Rahimtoola of Pivot Point says, “We train our girls for a couple of years in mannerisms. The girls come from a lower class of society and we want to make sure that they learn polite manners. The client is always right and as we are selling services, we have to be polite.”  But there have been times when these polite manners have been taken for granted.

Rahimtoola told The Express Tribune, “A regular client once called one of the girls at the reception a swine. I was very upset and told her to leave immediately as my girls are very precious.”

Customer care is a top priority for her, but it is important that her staff is treated well by her clients and they should always remain polite. Rahimtoola encourages clients to submit written complaints if they have any.

Aliya Tipu of Allenora says, “I do receive rude comments. The other day a woman wanted a facial and was extremely rude to the girls and did not like the service. She was constantly complaining. I told her that the effects will be noticeable after four or five days. After four days I received a text message from the same woman saying, ‘Amazing work. Speaks for itself.’”

Salon staff members have mixed experiences as well. Pivot Point’s Sanam says, “My clients have never been rude to me, after all I have done nothing to upset them.”

However, Saby at the same salon said, “Sometimes clients are rude but we have to remember to control ourselves. We should not get angry or be rude, that is not what we are paid for.”

Qadir, a make-up artist at Sabs, said, “Mostly customers are not rude. They know that if they are coming to a salon they shouldn’t be rude at all, if they are then they won’t get proper services.”

“I love going to Bina Khan where they have a rule that employees cannot eat with their hands because they do not want customers to smell of curry when they are getting a facial. The girls there are always happy to see you.

I have been advised to visit a dermatologist by a manicurist at Nabila’s.  A hair washer at Mona J’s has commented on my hair being dry. The staff at another salon always comments on my weight. When you go to a salon you want to feel beautiful not ugly.”

“I usually don’t have very high expectations as far as treatment is concerned when I go to the salon. So imagine my surprise when during one haircut at Neelo’s, one of the girls walks up with a chilled drink and a tray of bakery goodies for me to try. I honestly thought she mistook me for someone famous.”

“I walked in at Mirrors and waited for 10 minutes, but no one asked what I wanted. When finally a girl came up to me, I told her I needed a blow-dry. She washed my hair but the power went off. While the girl attending to me was asking for the generator to be started, a senior staff member complained that she already had a client with an appointment and the generator couldn’t handle two dryers. The owner told the girl not to blow-dry my hair and asked me for Rs180 for the shampoo. I paid the money and never went back to Mirrors.”

“I took the salon girl’s advice to get my feet bleached, but it caused me to break out into a rash right before my engagement! I complained that the bleach used was not of good quality because I have never reacted to bleach before, but no one paid heed to my issues and I had to go to the doctor for a cure.”