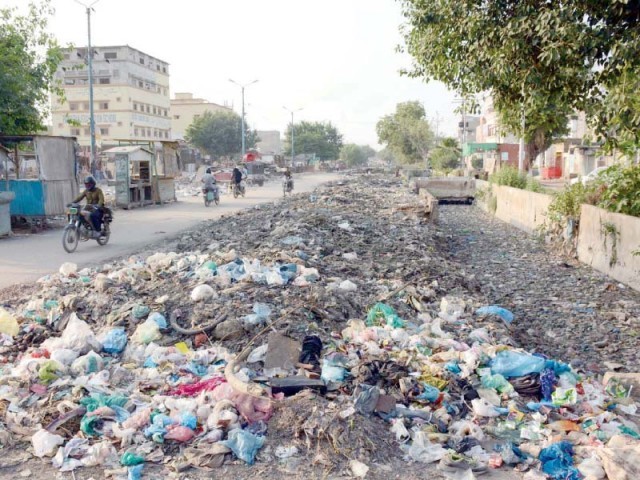 With the federal, provincial and local governments all bickering over who cares most for Karachi, the city is increasingly wearing the look of a garbage dump. Meanwhile, politicians continue to criticise and blame each other on Twitter and in the mainstream media. PHOTO: PPI

KARACHI: Imagine a city that is so beloved that everyone wants to take care of it. If you are Twitter-savvy and have been following the conversation around Karachi’s gutter politics for the past few weeks, you would believe that all three tiers of governments – the federal, provincial and local administration – want nothing else but to make Karachi the most beautiful city in the world.

In August, Federal Minister for Maritime Affairs Syed Ali Haider Zaidi launched the ‘Clean Karachi’ campaign, pledging that the city would be ‘cleaned’ within two weeks. Over a month has passed since and Karachi is in a bigger mess than it was – on the ground as well as on Twitter.

When reached by The Express Tribune on Wednesday, Zaidi claimed that they have collected at least 150,000 tonnes of garbage, but hardly 10% of it has been taken to the landfill sites. The rest, he admitted, has been dumped, albeit temporarily, at various locations, including over 200 trucks at an empty plot of the Karachi Port Trust located on Mai Kolachi Road. The reason for this, according to Zaidi, is that it was unviable to transport the wet waste across the city to the landfill sites. Now that the garbage has dried out a bit, they would start shifting it to the landfill sites, he added.

“The work has been started now and soon, those sites will be cleaned,” said Zaidi. “It wasn’t my job to collect the garbage and clean the drains but I did,” he justified, adding, “I own this city and we all have to clean it for its survival.”

Asked why the garbage could not have been dumped at designated points instead of open plots and main roads, Zaidi reasoned that the city has only five functional Garbage Transfer Stations (GTSs). “We were told that there were 11 GTSs,” he claimed. “We couldn’t have dumped it directly at the landfill sites.”

A day after he launched the drive, Zaidi asked citizens and the philanthropists to support the campaign financially for its success. He said that Rs45.5 million has been submitted in the account of the ‘Clean Karachi’ initiative, adding that all the money had been spent on the drive. Despite the federal government’s support for Zaidi’s campaign, it has not been given a single penny. When this was pointed out to him, Zaidi said that the drive was his own initiative and was appreciated by Prime Minister Imran Khan.

“I want to see the city clean. The drive is not merely for political gains but to serve the people of Karachi,” he said. “I am not a candidate for Karachi mayor,” he said, refuting rumours that the drive was initiated as he wanted to become the next mayor. “We all have to clean the city or it won’t be attractive for investors,” he justified.

In response to another question, Zaidi said that the campaign had been paused from the past few days due to the latest spell of rain and Ashura, but they have started the work again from Wednesday. He added, however, that the funds they had collected so far had been spent and that they would collect more funds to resume the work.

On the other hand, the Sindh government has alleged that the federal government [PM Khan] doesn’t own Karachi. “Not a single penny has been allocated so far for the Karachi drive[s],” commented Sindh government’s spokesperson, Barrister Murtaza Wahab.

Criticising Zaidi’s initiative, Wahab said that only 13,000 tons garbage was dumped at the landfill site located on Hub Road. “The rest was dumped on the roads,” he alleged.

Wahab said that without funds and taking the provincial government into confidence, the federal ministers and their campaigns and committees will not be able to do anything. He asked the Pakistan Tehreek-e-Insaf government to release the Rs162 billion for Karachi announced by PM Khan.

Sindh to set up special police force to protect environment