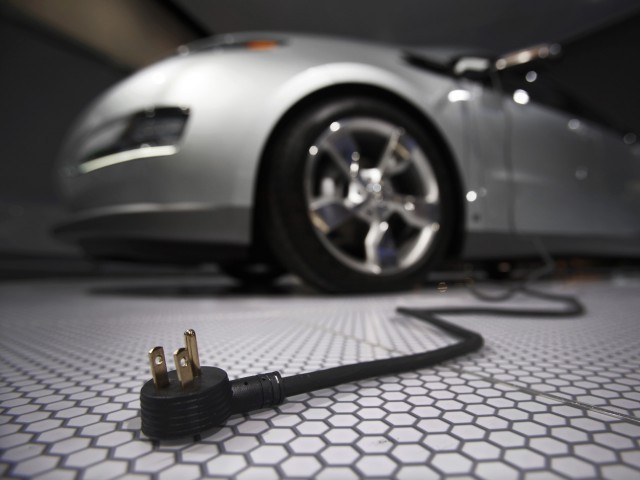 A plug is seen coming from an electric car during the North American International Auto Show in Detroit, Michigan. PHOTO: REUTERS

ISLAMABAD: A Russian technology firm has expressed interest in investing in the electric vehicle industry of Pakistan with the latest technology called nanotubes.

In that regard, a delegation of the Russian firm, led by Igor Kim, met Adviser to Prime Minister on Climate Change Malik Amin Aslam on Wednesday.

Talking to the delegation, the federal minister said the government was seriously focused on the issue of climate change and had taken several steps in that connection.

The adviser said the government had taken five initiatives to mitigate the impact of climate change which included the 10-billion-tree tsunami, ban on plastic bags, clean and green drive, focus on electric vehicle policy and green climate fund.

Welcoming the investment, the adviser told the delegation that the electric vehicle policy was on the cards and would be approved by the Pakistan government within a couple of weeks.

Once the policy was given the go-ahead, he said it would open new horizons in the areas of research and development and investment.

“The proposed policy will offer tariff incentives in order to make available electric vehicles at prices similar to those for conventional vehicles.” The adviser was of the view that Pakistan was a huge market for two and three-wheelers and there was immense potential for investment. “Currently, in Pakistan, 43% of carbon emissions come from the transport sector while electric vehicles will help reduce the emissions by two-thirds.”

The Russian delegation appreciated efforts of the Pakistan government and expressed the desire to introduce their products. Kim said the nanotube technology was being used in all sorts of materials with scores of objectives from reinforcement to enhancing conductivity.

He pointed out that their product was microscopic and was widely used in electric batteries, construction material, LED screen, solar panels, plastic, tires, conductors and clothes.

“Introduction of nanomaterial will add to energy efficiency by making it lightweight and minimising energy losses,” he added.