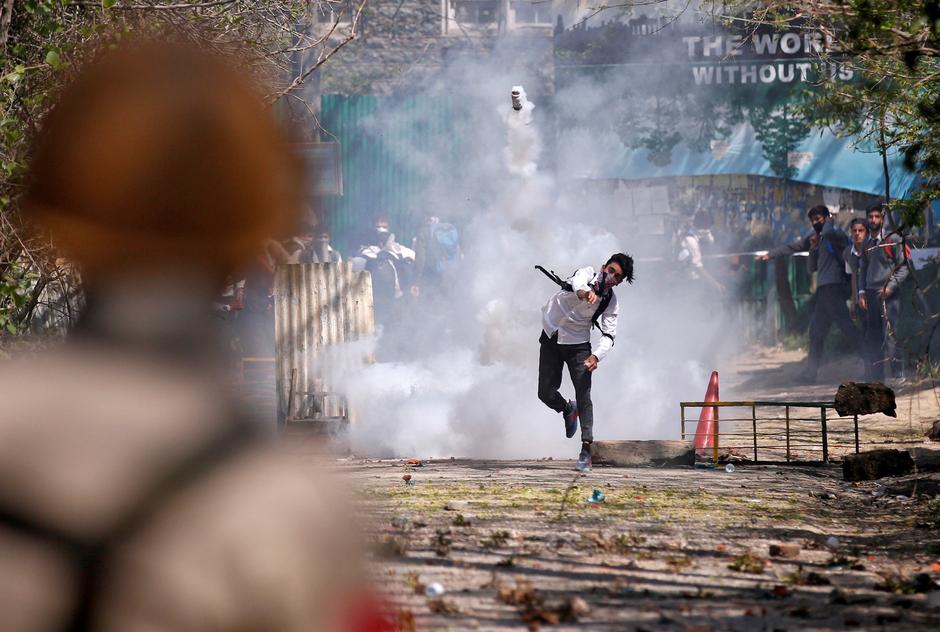 Riots broke out after the abrogation of Article 370 in Srinagar, Indian Occupied Kashmir. (Photo: Reuters)

The swiftness with which the modern man can switch from a shared consciousness for the problems of the “global village” to a cold-blooded individual who puts himself “first”, is one of the most brazen displays of hypocrisy the world has seen.

Since the abrogation of Article 370 by India, millions of Kashmiris have been under lockdown with a complete communications blackout, in addition to thousands of others detained. Their voices are not being heard, even by each other. If someone manages to sneak some pictures out, they become a New York Times viral. When a doctor somehow tells the BBC how the situation there is evolving into a humanitarian crisis, he’s picked up by the occupation forces. When the locals die or are killed by the occupation forces, their deaths are not registered. Hospitals, according to The Wall Street Journal, have become “graveyards”.

These are first-hand accounts of torture. Videos of terribly scarred bodies were shared by the BBC. All had similar accounts of being beaten with sticks, rods, and cables, only to regain consciousness through electric shocks being administered for further torture. Shehla Rashid, a politician, tweeted about four men being tortured with a mic placed in front of them so the whole area could hear them scream. She offered to provide more details to the authorities for an inquiry but was arrested for “sedition”. Unfortunately, these are only the stories that have made their way to the outside world with the victims, witnesses, and journalists risking their lives.

Torture is not new for the Indian law enforcement agencies which are protected by the draconian Armed Forces (Jammu and Kashmir) Special Power Act. The hair-raising accounts of Kashmiris that were documented in the report “Torture: Indian State’s Instrument of Control in Indian Administered Jammu and Kashmir” leaves one at a loss to decide not what to include but what is better omitted: plucking the detainees’ hair and nails, cutting flesh, burning private parts, and making them drink water in the worst forms, provides an idea of the kinds of torture reported. A staggering 432 testimonies in the document can land the reader into secondary trauma. Out of the 24 female victims of torture, 12 reported rape.

As noted in “Rape in Kashmir” by Asia Watch, a division of HRW, the Indian occupation forces are documented to have used rape as a device for retribution and control historically. Victims’ accounts of mass rape in the villages of Kunan and Poshpora on the eve of 23rd February 1991, by the Indian military is widely documented by the HRW, the BBC, and in a book, Do You Remember Kunan Poshpora, among other sources.

Even where the allegations have been found to be true by Indian inquiry commissions, as in the case of Gani’s rape — which occurred in May 1990, when she was on her way to her husband’s home after the wedding — the perpetrators from the military have not been prosecuted. In 2009, two women were raped in the Shopian district but the head of the one-man inquiry commission, Justice Muzaffar Jan, had to distance himself when he found the released report was doctored by the police, which was among the accused as well.

After the abrogation of Article 370, politicians have called on Indian Hindus to marry fair-skinned Kashmiri women, and popular songs propagate this fantasy. Women have protested for being objectified. A recent report by researchers who were in Kashmir from 9th to 13th August 2019, reported women complaining of “molestation” by security forces.

It is against this backdrop of abuses by the Indian military, and sometimes their political backing, that the blackout is occurring. The international political response to Kashmir has been restricted to statements expressing the shamelessly clichéd “deep concern”. For now, the media seems like the only deterrent keeping the Indian forces in check. We should support it in fighting a war which should have been the world’s.

Empowering women through skills in the age of automation