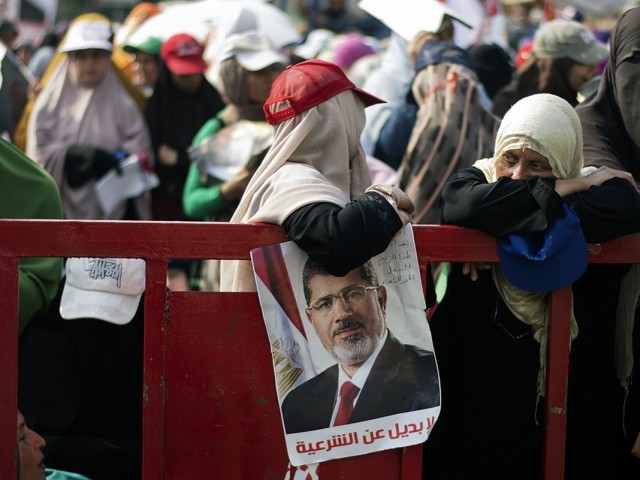 An Egyptian woman lean on a barrier as thousands of Muslim Brotherhood members and supporters of ousted President Mohamed Morsi gather in front of Rabaa al-Adawiya mosque in Cairo. PHOTO: AFP

CAIRO: An Egyptian court on Wednesday sentenced 11 senior Muslim Brotherhood figures to life in prison on charges of spying for the Palestinian Hamas group, a judicial source said.

They included the Brotherhood’s supreme guide Mohamed Badie and his deputy Khairat al-Shater who were both handed life sentences — 25 years in Egypt.

Five other Brotherhood members were sentenced to jail terms ranging from seven to 10 years while six were acquitted, the source said.

The defendants were accused of “committing crimes in collaboration with foreign organisations” namely Hamas and the Lebanese group Hezbollah, the source said.

They were also accused of “financing terrorism” and committing acts undermining the country’s stability and security.

Mohamed Fahmy, the judge presiding over the case, said before the verdict was announced: “The crimes the defendants committed harmed the independence and security of the country.”

“They betrayed their nation and there is no excuse for them,” he added.

The verdict can still be appealed, the source added.

The case initially involved ousted president Mohamed Morsi who died after falling ill during a court session in June.

Morsi, who hailed from the Brotherhood, was overthrown by the military in 2013 after a year of divisive rule.

Following his ouster, hundreds of his supporters were killed during protests.

Thousands others were detained in a severe crackdown that was later expanded to include leftist and liberal dissidents.

Egypt designated the Brotherhood group as a terrorist group shortly after Morsi’s ouster.

India one of the worst countries for expats