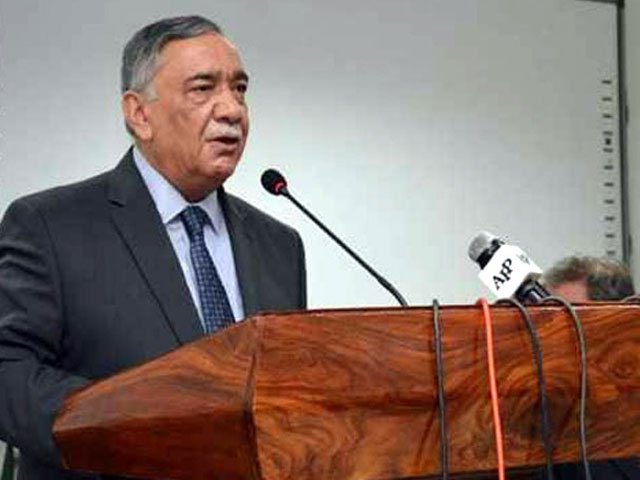 ISLAMABAD: Chief Justice of Pakistan Asif Saeed Khosa on Wednesday said the growing perception that the ongoing process of accountability was lopsided and politically engineered was dangerous and urgent steps were needed to ensure that the anti-graft campaign did not lose its credibility.

“The recovery of stolen wealth of the citizenry is a noble cause but if in the process the recognised standards of fairness and impartiality are compromised then the retrieval of the lost constitutional and legal morality may pose an even bigger challenge,” the top judge said while addressing a ceremony held to mark the start of the new judicial year.

“While talking of social and economic justice, the Objectives Resolution of 1949 and the Preamble to the Constitution also speak of political justice,” he added.

Endorsing the superior bars and the civil society’s concerns, Justice Khosa said the receding political space in governance of the state did not augur well for the future of the country.

“In recent times the leadership of the bar has repeatedly voiced its concerns over the receding political space in governance of the state and such concerns must not be ignored,” he noted.

The chief justice also made it clear that the bench and the bar stood fully committed to constitutionalism and the rule of law and democracy and together they would resist any attempt by any quarter to destroy or damage these ideals and principles or build inroads into them.

The CJP’s statement is significant against the backdrop of the growing perception that government affairs are largely being run by the security establishment and civilian rule is being weakened during the tenure of the incumbent regime. Legal experts say that the speech is reflective of how the country’s top judge of country assesses the incumbent political system.

Justice Khosa also expressed his concerns over reports about media censorship in the country.

“Voices being raised about the muzzling of the print and electronic media and the suppression of dissent are also disturbing,” he noted.

“It must be appreciated by all concerned that a voice suppressed or an opinion curbed generates frustration, which gives rise to discontent and increasing discontent poses a serious threat to the democratic system itself.”

The CJP said the constitutionally guaranteed rights of the citizens should never be compromised for the sake of short-term political or governance advantages.

“Democracy requires a long-term approach and tolerance for dissent and without that, the system plunges into authoritarianism and we have witnessed plenty of it in the past with disastrous consequences. ”

For the first time, the chief justice also expressed disappointment over the federal government not considering his suggestions to restructure the judicial system of the country by introducing a three-tier system, doing away with special courts and repealing or amending some unnecessary and problematic laws.

“Even my suggestion about holding an inter-institutional dialogue for sorting out irritants within the organs and institutions of the state has not received any consideration and the serious issue of the missing persons also still haunts us all,” he added.

Regarding the fixing of parameters and procedure for the suo motu exercise under Article 184(3) of the constitution, the chief justice noted that the scope of his court’s jurisdiction under the article was a matter of judicial interpretation and a plethora of case-law already exists on the subject.

“But the initiation of suo motu proceedings under that article is a matter of procedure and it is yet to be conclusively determined.”

The chief justice also said in one of the full court meetings held in the last judicial year, the judges of apex court had discussed different aspects of this issue in depth and in the next full court meeting a draft was likely to be presented and discussed proposing a suitable amendment to the relevant part of the Supreme Court Rules, 1980 and determining how a suo motu notice may be taken of a matter by the court.

“I am confident that the issue will be settled soon bringing consistency of practice and eliminating arbitrariness and whimsicality in the matter.”

Regarding the functioning of the Supreme Judicial Council (SJC), the chief justice said the body’s chairman and its members were committed to their oath of office and work with an unflinching resolve to proceed in all matters “without fear or favour, affection or ill-will”.

“Nobody should expect anything from them other than justice according to law.”

The CJP also maintained that being the chairman and a member of the SJC was the most unpleasant job that judges had to perform in their entire judicial careers.

Justice Khosa said the whole exercise in any case had to be a very sober and dignified keeping in view the senior and respectable positions of the judges inquiring into a matter and the exalted positions of the judges whose conduct was to be looked into. “Nothing but maturity, sobriety and grace is to be expected in the matter from all those concerned.”

The chief justice also observed that the complaint received by the council from the general public were mostly about some observations made or conduct displayed by a judge during the course of a hearing of a case or in respect of a decision which had gone against a party.

“Most of such complaints are frivolous or a result of frustration on losing a case or in respect of matters against which judicial remedies are available against the decision rendered and after following the prescribed procedure the council, more often than not, dismisses them without further ado.”

Usually the nature of the allegations levelled against a judge or the proceedings undertaken by the council are not shared with the public at large primarily to protect the prestige, honour and dignity of the judge as well as the image of the judiciary.

The CJP said that 56 privately-instituted complaints were pending before the SJC at the start of the last judicial year in September 2018.

Concluding his speech, the chief justice said he was aware that a section of the society was unhappy over the top court not exhibiting much interest in judicial activism in the last few months and being slow in taking suo motu action over issues.

“We realise that the criticism of the court over exercising restraint in some controversial and contentious matters may be far safer and less harmful than its criticism over imprudent and undue interventions in such matters,” he remarked.

“That section of the society may also appreciate that the taking of suo motu action on the demand of some persons may constitute dictated exercise of jurisdiction whereas that very section otherwise believes that the court should never act at the bidding or demand of any outsider,” he added.

Quoting American editor and critic HL Mencken, the CJP said: “The urge to save humanity is almost always a false face for the urge to rule it.”

The CJP said judges had no such urge and were committed to perform only that role which the constitution and the law mandate for them.

“I have always maintained that this court is open to all and sundry and anybody interested in activating its judicial process may take the trouble of filing a petition before it that shall be heard and the purpose would be served.”

The chief justice said the court would take suo motu notice of a matter only when it felt the necessity or utility for it and not when it is coaxed by outsiders.

“Be that as it may, at present this court is practicing judicial activism of a different kind. Instead of judicial activism, it is practicing active judicialism. It is taking measures to improve and activate the judicial sector in many ways. It has decided to put its own house in order first and the steps taken by this court during the last judicial year would confirm that serious, earnest and concerted efforts are already afoot in that direction and many noticeable successes have already been achieved by us in those efforts.”

The chief justice said there were about 1.81 million cases pending before all courts and tribunals in the country at the beginning of the last judicial year. The total number of cases pending in the country at all levels at present is about 1.78 million which marks a noticeable decrease in the number of pending cases despite the institution of about 3.65 million fresh cases during this period.

Regarding the process for judges’ appointment, the chief justice said some teething problems and initial hiccups related to the working relationship between the judicial commission and the parliamentary committee were ironed out and the system was presently functioning harmoniously with an understanding that due respect is to be extended to the respective opinions of the two bodies and the views of each body are to be honoured as far as possible and practicable.

“I may add that the representatives of the bar have been demanding for some time a greater say of lawyers in the matter of appointment of Judges of the senior judiciary. A committee constituted by the Judicial Commission of Pakistan for discussing some proposed amendments to the relevant rules for that purpose has not been able to meet so far because of numerous factors including frequent change of composition of the committee due to retirement of its different members from the bench and the bar,” he explained.

“An effort shall be made to reconstitute that committee at the earliest so that it may meet and deliberate upon the matter.”