Some made it ashore from small boats while others were still at sea when they were interc­epted by the border force
By AFP
Published: September 11, 2019
Tweet Email 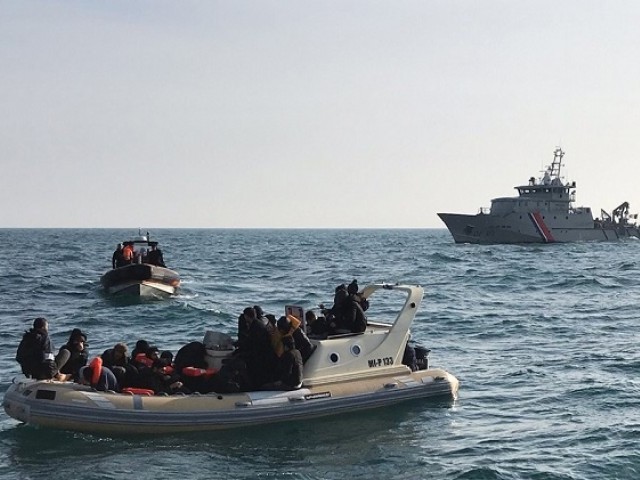 LONDON: British authorities said they intercepted 86 migrants crossing the Channel from France on small boats on Tuesday, thought to be one of the largest number of apprehensions in a single day.

The migrants — including women and children — who hailed from eight different countries were detained in five separate incidents, according to Britain’s interior ministry.

Some had made it ashore from small boats while others were still at sea when they were intercepted by the border force.

The arrivals are the latest in a spate of Channel crossings which have intensified this summer as migrants take advantage of mild weather to try to reach Britain via the world’s busiest shipping lane.

Since January, 1,450 migrants have been rescued either by British or French coastguards — more than double the number who tried to cross the busy shipping lane in the whole of 2018, according to official French figures released last month.

Interior minister Priti Patel met her French counterpart in Paris last month, when they agreed “to deploy more resources along the French coast to intercept and stop crossings,” her department said.

“We are working closely at all levels with the French authorities to tackle this dangerous and illegal activity,” an interior ministry spokesperson said Tuesday.

Border force cutters are patrolling the Channel while equipment including drones, CCTV and night vision goggles are in use.

“Crossing the Channel in a small boat is a huge risk. The criminal gangs who perpetuate this are ruthless and do not care about the loss of life,” the spokesperson added.

Tuesday began with the interception of two small boats carrying 23 people from Iran, Afghanistan, Pakistan and the Philipines.

Two further vessels were stopped separately off the British coast later in the day, with dozens of other migrants on board including Iraqi, Vietnamese and Ethiopian nationals.

Meanwhile officials also detained 22 migrants, including Turks, who had made it ashore in two locations on the southeast coast.

Those apprehended were taken to the port town of Dover, where they were medically assessed and transferred to immigration officials for interview.

Rouhani says US ‘warmongering’ against Iran will fail