France ease past Andorra as Griezmann misses from spot again

France ease past Andorra as Griezmann misses from spot again 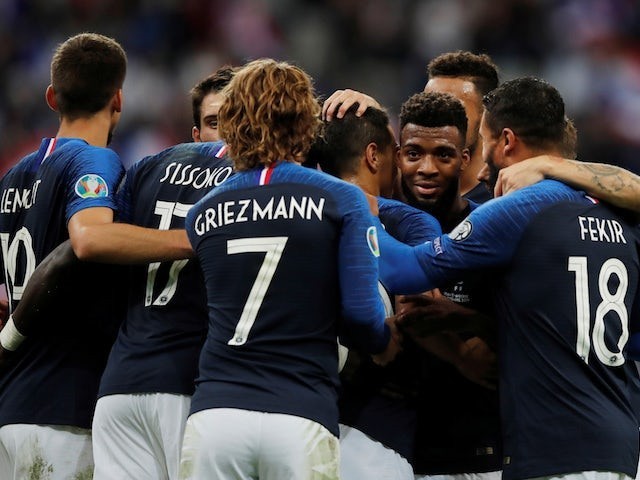 Les Bleus are joint-top of qualifying Group H with 15 points after six games, level with Turkey and three ahead of Iceland with the top two teams advancing to next year's 24-team, Europe-wide finals. PHOTO: AFP

PARIS: Another goal from Kingsley Coman set France on their way to a 3-0 victory over Andorra in their Euro 2020 qualifying clash at the Stade de France on Tuesday as Antoine Griezmann missed a penalty for his country for the second game running.

Coman had scored twice in Saturday’s 4-1 win over Albania at the same venue and this time he opened the scoring in the 18th minute against their Pyrenean neighbours, ranked a lowly 136th in the world.

“It has been a very good week. It has gone well personally and collectively,” Coman told television station TF1.

Having hit the bar with a penalty against Albania, Barcelona star Griezmann had a spot-kick saved before the half-hour mark here, but his club colleague Clement Lenglet headed in his first international goal to make it 2-0 in the second half.

Wissam Ben Yedder wrapped up the win for Didier Deschamps’ team on what was a notable occasion, as France played their 100th game at the stadium where they won the World Cup final in 1998.

The world champions could have won by more — they hit the woodwork twice in the second half against an Andorra side who fought bravely but remain without a point or a goal after six qualifiers.

Les Bleus are joint-top of qualifying Group H with 15 points after six games, level with Turkey and three ahead of Iceland with the top two teams advancing to next year’s 24-team, Europe-wide finals.

“We came together to get six points in September and we have got the job done,” Deschamps told TF1.

Turkey, who beat France at home in June, won 4-0 in Moldova on Tuesday and visit France next month.

Iceland’s hopes of qualifying suffered a major blow on Tuesday when they went down 4-2 in Albania. Their home meeting with France in Reykjavik on October 11 will be crucial for them.

France should not be too concerned about that trip, however, not least because the likes of Kylian Mbappe, Paul Pogba and N’Golo Kante may be back by then.

“Next month we will have matches with our two main rivals in the group. The six points here are good, but the next six will be very important too,” insisted Deschamps.

Tuesday’s starting line-up featured only four of those who took to the field in last year’s World Cup final win over Croatia.

Lille winger Jonathan Ikone made his first international start and he did well to set up Coman for the opener, the Bayern Munich man holding off the last defender and rifling high into the net.

Coman now has three goals in two games having previously netted just once in 17 for his country.

With the half-hour mark approaching Griezmann won a spot-kick, but this time his attempt was saved by Andorra goalkeeper Josep Gomes.

“It is really annoying. I’ll just need to keep working. You can’t be on top of your game all the time,” Griezmann admitted after.

However, he redeemed himself in the 52nd minute as he sent in a free-kick from just outside the area for Lenglet to head in his first goal for France on the occasion of his third cap.

Gomes then did wonderfully to keep out a Coman header before Moussa Sissoko and Coman both hit the bar.

A third goal arrived in stoppage time, however, as substitute Ben Yedder of Monaco pounced to score after Gomes had blocked Nabil Fekir’s free-kick.

PSL5 Draft could be delayed: Latif