Studen­t groups have set a deadli­ne of late Friday for their remain­ing demand­s to be met
By AFP
Published: September 10, 2019
Tweet Email 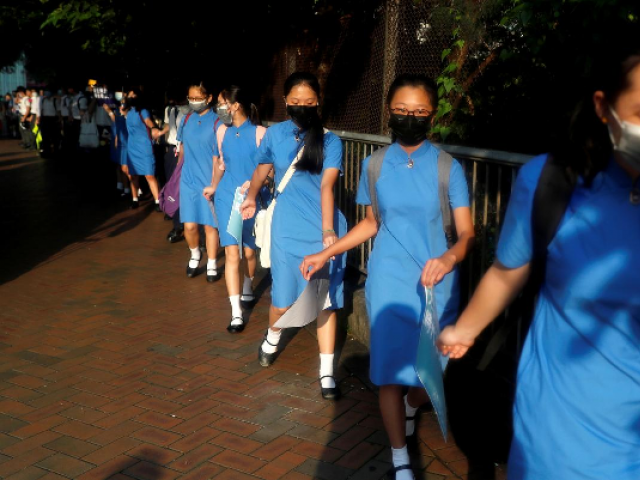 Tam, 16, was outside his school in Hong Kong’s Yau Ma Tei district earlier this week where he and dozens of other classmates linked hands in what has become a daily ritual across the semi-autonomous Chinese city.

These human chain demonstrations in which pupils form long lines and chant slogans are the latest way the city’s youth have chosen to voice support for pro-democracy protests that have plunged the financial hub into crisis.

“Hong Kong students are known for being hardworking and having lots of homework, but we still choose to stand out today,” he told AFP, asking not to use his full name.

“Even if we do not have any power as a student, we can actually stand out to form this chain to speak out our demands,” he added.

Millions have taken to Hong Kong’s streets over the last 14 weeks in the biggest challenge to China’s rule since the city’s handover from Britain in 1997.

What started as a pushback against a bill allowing extraditions to mainland China snowballed into wider calls for democracy and police accountability after the city’s leaders and Beijing refused concessions.

The movement is primarily youth-led and many schoolchildren and students have joined what has been an unprecedented summer of political rage.

But with schools going back a fortnight ago, younger students have found ways to keep their protests going, even as they attend classes.

Each morning it is not uncommon to see rows of youngsters in uniforms standing outside their schools, shouting slogans like “Reclaim Hong Kong, the revolution of our times” and “Free Hong Kong”.

Class boycotts have also been organised by some in schools and universities.

In a video that went viral last week, students at one school were filmed singing “Do you hear the people sing?” – a protest anthem from the musical “Les Miserables” – over the Chinese national anthem, as teachers looked on unsure what to do.

Others held sit-ins or created protest “Lennon Walls” plastered with sticky notes inside their classrooms.

Hong Kong’s Education Bureau sent out official guidelines in late August saying authorities would be collecting the numbers of absent students and details on any teachers who participated in class boycotts.

“No one should use schools as a platform to express their political views,” education minister Kevin Yeung Yun-hung said in an open letter to parents before the term started.

“And we should never get underage children involved in order to avoid inciting emotions and creating pressure that harms school harmony,” he added.

Student groups have set a deadline of late Friday for their remaining demands to be met.

After months of refusing to back down, city leader Carrie Lam fully withdrew the loathed extradition bill last week but the gesture was dismissed as too little, too late.

Protesters are demanding an inquiry into the police, an amnesty for those arrested, retraction of the term “riot” to describe protests and universal suffrage.

One eleventh grade student was standing outside his school earlier this week wearing a helmet. He said he knew there was a risk of reprisals for protesting.

“But it’s better to be punished than let our right to speak freely be restricted,” he added.