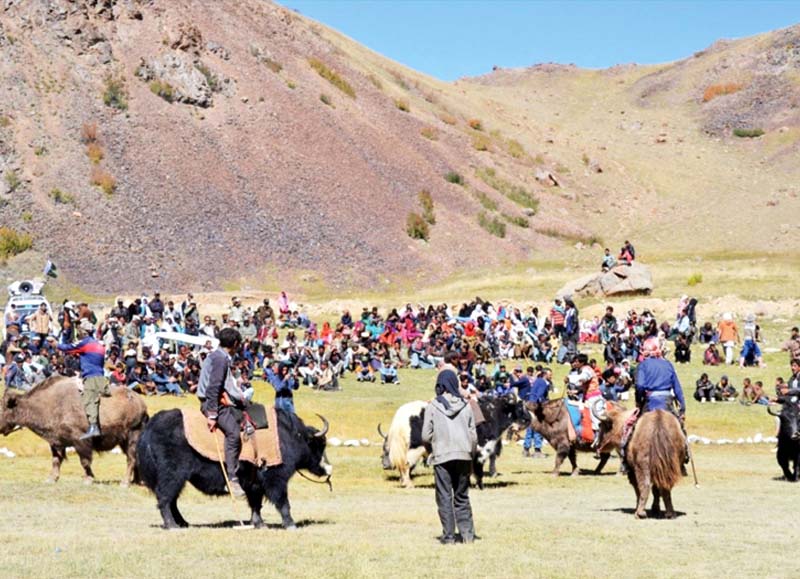 PESHAWAR: Pakistan has no shortage of natural beauty and scenic touristic spots which are bound to leave visitors completely mesmerised. From snow-covered peaks, lush forests and green meadows to breathtaking glaciers and lakes, the country presents a plethora of options for tourists to enjoy a refreshing getaway.

One such spot is largely unexplored Broghil Valley – a spectacular work of nature, located in the extreme north of Chitral in Khyber Pakhtunkhwa (K-P).

The Broghil Valley is situated in a remote mountainous area of the Chitral district in K-P. It is a narrow valley, located around 250km away from the Chitral city. The valley borders Gilgit-Baltistan in its northeastern part and the Wakhan Corridor of Afghanistan along its northwestern part.

The farthest northern part of the valley ends at the Karomber Pass, which forms a boundary between the Broghil Valley and Ishkoman Valley. The famous Karomber Lake is also situated at the Karomber pass.

Surrounded by the Chiantar Glacier, the valley is home to many wild animals, including bears, marmots, snow leopards and foxes, among others. Besides that, Karomber Lake also supports a wide variety of aquatic life.

Life in the valley

Even though the valley is so beautiful that it is sometimes referred to as a heaven on Earth, life for the residents of Broghil is far from easy. The region experiences very harsh weather during winter months, so much so that it receives five to six feet of snow every year. As a result, the valley becomes completely isolated from the rest of the province and all communication is cut off.

Before the beginning of winter, residents of the valley go to Chitral to sell yaks – their sole source of income – so that they can purchase household items as they remain stranded in the valley throughout the five months of winter.

Amin Jan Tajik, the Nazim of Broghil Valley said that unlike the past – when the valley used to be extremely isolated and had no access to even the daily commodities of life – there has been some improvement over the years. Now, a few people have started opening shops in the valley that store different items to last through the entire winter season.

“Residents take their yaks both to Chitral and Ashkoman area of Gilgit-Baltistan to sell them, where a large number of buyers show up,” Tajik explained. “The meat of yak is very famous in Chitral and is sold for Rs380 per kilogram.”

Tajik explained that yak meat is preferred in the region because unlike other domesticated animals who are kept in a corral, yaks are left to graze in the wild during winter because of which its meat is palatable and tasty.

Owing to its native weather, the best time to visit the valley is during summer, especially during July when the annual Broghil Festival is celebrated – an event that the world doesn’t know much about.

Steps, however, are being taken to make it a regular event like the Shandur Polo Festival, so that more local and foreign tourists can be attracted towards this unexplored, ancient spot.

“Akin to the Shandur Festival, we want to organise the Broghil Festival on a large scale every year so it could also receive an international response,” Junaid Khan, managing director of Tourism Corporation told The Express Tribune.

He added that the festival would hold events like yak polo, yak race, free-style polo, buzkashi, horse race, donkey race and tug of war. To make the event more entertaining, visitors will also get to hear traditional Wakhani music.

“Yak polo and yak race are special parts of the event because they can’t be witnessed anywhere else in the world. All these events take place 13,000ft above the sea level, which makes the experience all the more unique,” he explained.

Junaid said that he recently had a meeting with the local organiser of the festival – the Chiantar Welfare Society Broghil – and the deputy commissioner of upper and lower Chitral to devise a strategy through which tourists could be provided with, easy access to the valley.

“Without any doubt, Broghil valley is close to nature and once people explore it, they would love to revisit to beat the heat,” Junaid said. “We will also invite people from different walks of life to the mountain top so that they could enjoy trekking through the beautiful terrains, take rides on horses or use the jeep to reach to the festival spot.”

He added that this year, a large number of foreign tourists attended the Shandur Festival as well. Locals of the area are of the view that the government should take more steps to facilitate tourists and ensure the reconstruction of roads so that they don’t face any troubles.

“This year, tourists were mesmerised to witness the Shandur Festival. Next year, it could be the Broghil Valley Festival. Once they witness the grandeur of the festival, they are sure to come back,” he said.

Even though it’s worth visiting, only a few foreigners have been able to get permission from the authorities to explore this majestic valley. The case of a German man named Gabriel Gersch was very rare, for instance, as he obtained permission to complete a Hindukush Traverse.

Gersch, along with two of his friends, hiked through the entire Pakistani Hindukush from west to east and passed four major passes with the highest one over 5,300 meters in 2016.

When approached, the Nazim of Broghil Valley, Amin Jan Tajik said that through the festival, he wants the world to see different aspects of the ancient and unique Wakhani culture, especially the yak race and yak polo that attract local and foreign tourists.

Commenting on the recent influx of foreign and local tourists in the area, Junaid Khan said that the government has taken a bold initiative by withdrawing the no-objection certificate (NOC) condition for foreign tourists.

Recalling the past, Junaid added that a large number of foreign tourists could be seen visiting far-off villages of Chitral every summer. With time, however, the security situation in Pakistan deteriorated because of terrorist attacks, stopping foreigners from visiting the country. Consequently, Pakistan lost its status as an attractive destination for tourists.

“After several years of insurgency and militancy, we are now returning to normalcy as foreign tourists have once started visiting different areas of Pakistan once again, including Chitral,” he said.

Construction of roads to facilitate tourism

In a bid to facilitate tourists in the best possible fashion, K-P’s Communications and Works Department has proposed to construct roads to connect five new tourist destinations in Chitral district for Rs9.2 billion.

“The construction of the roads will not only facilitate tourists to the valleys but it would also benefit over 30,000 local people,” Junaid Khan said. “The Mastuj-Broghil road – which will connect the various parts of the province with the Wakhan Corridor in Afghanistan – will be the costliest of all as it will incur Rs4.4 billion.”

The roads would also connect the remote valleys with rest of the district throughout the year which remained cut off in winter.

“Once constructed, the roads connecting the five major valleys would prove to be a game-changer for the tourism industry as visitors will be able to explore many new areas that were unheard of in the past,” a senior journalist working for The Chitral Times said.

He explained that at present, a tourist in Chitral can only go up to the Kalash Valley. The five proposed destinations have a fabulous potential to attract tourists as they will not only be able to witness the breathtaking landscape of the region but will also experience the unique Wakhani culture of Broghil, together with the legendary Karombar Lake and the Chiantar Glacier.

“The Yarkhun-Broghil Valley can keep tourists engaged for well over a week while the Broghil Festival will be the main extravaganza, leaving behind the Shandur festival,” the journalist concluded.