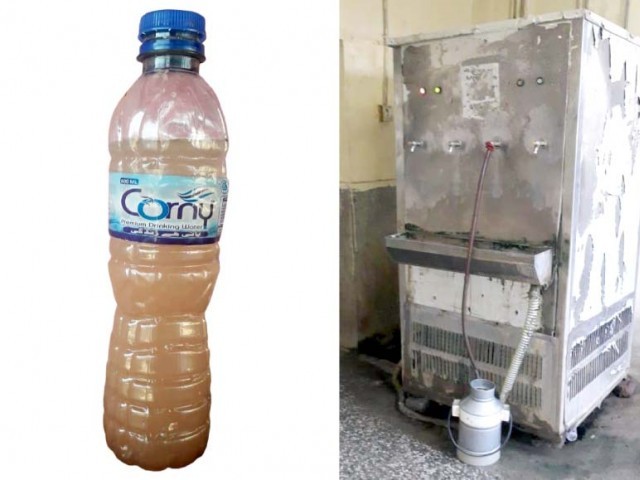 SU students are provided muddy water to drink and use for other chores. Most filtration units fixed to the water coolers in the hostels are non-functional. PHOTOS: EXPRESS

KARACHI: Most people who attend university look back on their college days as the best time of their lives. For students of Sindh University in Jamshoro, what were supposed to be their best days have turned into a living nightmare.

Students living in the hostels of Sindh University complain the living arrangements they have been provided are in a shambolic state and lack amenities as basic as clean drinking water. Dozens of them staged sit-in protests inside the university’s premises to demand the varsity administration provide them water fit for drinking at the very least.

“We are being forced to drink muddy water fetched straight from the Indus River,” complained Ansar Buriro, who is pursuing a Master’s degree in mathematics. “I am in my final year now and the conditions I have been living in have not changed since my first semester,” he said.

More than 6,000 male and female students currently live in the eight different hostels provided by Sindh University. None of them, students protest, have proper water supply and sewerage systems.

“When I entered the hostel I live in over a year ago, it looked like a ghost house,” said another student who studies pharmacy. “The students were sleeping in the common hall without beds because the hostel rooms were so unhygienic. We had no other option but to keep on living in such a claustrophobic environment,” he told The Express Tribune on condition of anonymity.

“All Sindh University hostels are in the exact same pathetic condition,” the student lamented. “Be it the Lal Shahbaz Hostel, Allama Iqbal Hostel, Allama-e-Qazi Hostel, Z A Bhutto Hostel, Federal Hostel or Makhdoom Amin Fahim Hostel, all of them are a shameful sight.”

“We have to bathe with muddy water straight from the Indus and are forced to drink it too. Most of the filtration units fixed to the water coolers in the hostels are non-functional. The contaminated water we have to drink has resulted in a host of gastrointestinal problems among students,” he added.

“The washrooms, especially, are in a miserable condition,” said sociology student Syed Ameer Shah. “The janitor does not come to clean it for weeks. On top of that, four to five students are forced to share a room rather than two or three,” he complained. “No one pays any heed to our problems.”

The situation in the girls’ hostels appears even worse. Not only do they live in the same conditions as their male counterparts, but they also have to live with the added threat of intimidation. “There are so many issues, but there is a widespread fear among girl students,” said Sorath Leghari, a final year student who took part in last week’s protest. “They [students] are afraid of action against them and hence choose not to complain.”

Speaking about the drinking water problem, Sorath said that water from Indus River flows into the university’s main tanks directly. “The administration supplies water to hostels from those tanks without any treatment,” she said. She added, however, that the problem was not limited to just hostels. “Even in our departments, we are forced to drink the same muddy water from Indus, which is already a dumping ground for toxic waste.”

Speaking to The Express Tribune, Student Affairs Director Dr Aijaz Ujjan rejected complaints that the water was unfit for drinking. “I am a biologist. I know when water is contaminated,” he insisted.

“We add chlorine to our water stores to kill any bacteria and other microbes, and prevent the spread of waterborne diseases,” claimed Dr Aijaz. “If the water was as bad as students say, many of them would be hospitalised. Can anyone give any figure on how many Sindh University students have suffered or are suffering from waterborne illnesses?”

Sindh University Registrar Dr Ameer Abro, however, admitted that the quality of water being provided was not up to the mark. He insisted, however, that people across Jamshoro and Hyderabad drink the same water. He also argued that the reason the water appeared ‘muddy’ was because of the Kharif season. “In this season, sand and silt do not settle down on the river bed,” he said.

Dr Abro added that while all university hostels and departments had filtration units affixed to water coolers, there was an issue with them that has not been fixed yet. “With the help of the Oil and Gas Development Company, we will install new filtration units to resolve this issue permanently,” he said.