Hopes and fears on eve of judicial new year

Hopes and fears on eve of judicial new year 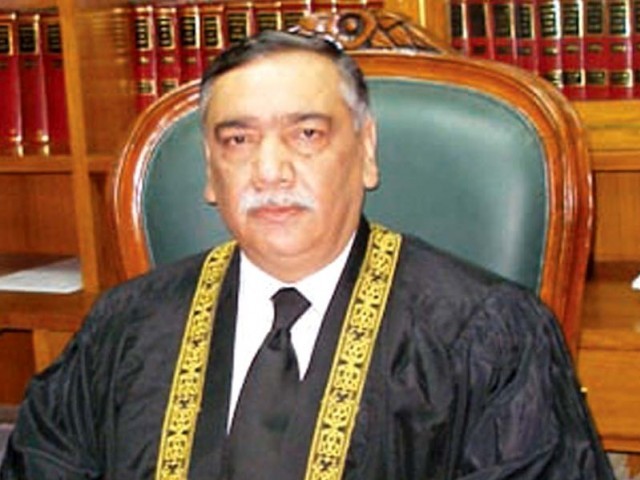 ISLAMABAD: The superior judiciary led by Chief Justice of Pakistan (CJP) Asif Saeed Khosa is going to face great challenges in new judicial year (2019-20), which is set to start on Wednesday (tomorrow).

To mark the occasion, a ceremony will be held on September 11 in the federal capital which will be attended by CJP Khosa, Attorney General for Pakistan (AGP) Anwar Mansoor Khan as well as superior bars representatives. This year, it has been decided that the full court ceremony will be shown to all four branch registries of the Supreme Court via a video link.

The outgoing judicial year will be remembered as that of judicial restraint as the incumbent CJP has focused on improving criminal justice system and his efforts have largely been successful in this regard.

Unlike his predecessor Mian Saqib Nisar, CJP Khosa did not exercise suo motu jurisdiction by encroaching on the executive affairs.  He even redefined parameters of the Supreme Court Human Rights cell to redress individuals’ grievances.

Justice Khosa has also rolled back Justice (retd) Nisar’s policy of judicial interference in governance and policy issues, which is also being appreciated by the bar.  He has adjudicated only a few public interest matters, wherein judicial restraint was very visible.

For judicial reforms, the CJP formed public complaint committees in each of the 116 districts of the country to address people grievances against police. In order to comply with Article 37 (d) of Constitution, he established Model Criminal Trial Courts in each district for speedy, inexpensive justice.

More than thirteen thousands murder and narcotics trials have been concluded by the model courts in the last five months. It is also learnt that there will no backlog of criminal appeals in near future.

The CJP Khosa also restored discipline of Courtroom No 1 by giving proper opportunity of hearing to the parties’ counsels to plead their cases. There is no adjournment of hearing in his bench.

All cases heard by him are being decided on the same day. The Supreme Judicial Council (SJC) led by CJP Khosa also initiated proceedings of misconduct against inefficient judges first time.

Despite all these achievements, the superior judiciary led by CJP Khosa is facing a number of challenges.

Foremost among the challenges is that judges’ independence is under threat through various ways especially after filing of presidential reference against Justice Qazi Faez Isa and Justice K K Agha.

All superior bars are raising voice against this executive move and claim that references are based on mala fide. The judges, who put a question mark over conduct of security establishment, appear to face tough time.

The Supreme Court is likely to take up constitution petitions filed by Justice Isa and different bars against the SJC proceedings in this matter soon. The bars have contended that allowing state agencies and functionaries to covertly monitor superior court judges and their families amount to granting them “a license to blackmail and pressurise judges and is inimical to the independence of judiciary”.

Likewise, all the petitioners have raised serious question over conduct of the SJC members.

Even Justice Isa has accused the CJP of being biased against him. The bars in their petitions say independence of judiciary has to be protected not against any external threats but “from the threats originating from within the judiciary itself”.

A section of lawyers also believes that instead of giving guidelines to high courts to adjudicate high-profile cases, the Supreme Court should allow the high court judges to decide matters independently.   If they commit any error then appeals against their rulings will be made in the apex court.

On the recommendation of the Ministry of Law, judges who were hearing cases of the Pakistan Muslim League-Nawaz (PML-N) leaders have been transferred.  A judicial officer remanded senior journalist Irfan Siddiqui in police custody for 14 day. The next day, the same judge granted him bail.

The superior judiciary is also facing another type of challenge since its July 2017 Panamagate verdict.

Two major political parties – the PML-N and Pakistan Peoples Party (PPP) – are facing tough time by the executive in the name of accountability. A number of their leaders are behind bars at the stage of investigation. It is also a matter of concern that political leaders are losing hope of any relief from the superior judiciary in the prevailing situation.

Talking about challenges of incumbent judiciary, a senior lawyer said credibility deficit and depolarization is the biggest challenge facing the judiciary. “Right now the judiciary is seen in ‘a camp’. It should not be polarized, it should be bipartisan,” he said.

CJP Khosa in his first speech had vowed to determine and lay down the scope and parametres for the exercise of the original jurisdiction of the Supreme Court under Article 184(3) of the Constitution.

Senior lawyers believe that there will be a challenge for the CJP, who is retiring in December, to evolve a consensus among the SC judges to regulate suo motu powers by amending the Supreme Court rules.

It has been witnessed that since restoration of judiciary in March 2009, public interest litigation – used against maladministration and corruption – has largely weakened the civilian supremacy. Likewise, judges who exercised public interest jurisdiction are not being remembered in good words.

Though CJP Khosa has been successful in clearing the backlog of criminal cases, pendency of civil cases is not decreasing in the apex court. The legal experts feel that the SC needs a judge expert in civil matters.

Currently, one position in the apex court is vacant. The appointment of a new SC judge will be a test for CJP Khosa, who proposes a name for the new judge under the law.

The superior bars have been questioning the efficiency of many judges, appointed through Judicial Commission of Pakistan (JCP) since 2010.  A section of lawyers believes that criteria of judges’ elevation should include competence and reputation, and seniority should not be the primary factor.

Though, the superior judiciary monitored the trial of politicians in graft cases, the treason trial of former president General Pervez Musharraf has not been e completed despite passage of six years.

Likewise, the relationship between bench and bar is not cordial after the SJC proceedings of misconduct against Justice Isa. It is also a challenge for top judges to maintain cordial relationship with the bar, which is already critical over the SJC members’ conduct in Justice Isa case.

All eyes are on the superior judiciary as how it will protect constitutional rights of citizens in prevailing political situation and how it will maintain its power/ independence which was gained through mass movement after November 3, 2007 provisional constitutional order (PCO) and emergency.

CJP Khosa in his first address on January 17 proposed an inter-institutional dialogue at summit-level to be convened by president of Pakistan and attended by the top parliamentary leadership, judicial leadership and executives including the military and intelligence agencies.

Despite passage of eight months, the president of Pakistan did not convene proposed summit.